Florence Funds Surpass $1B As Officials Face The Future 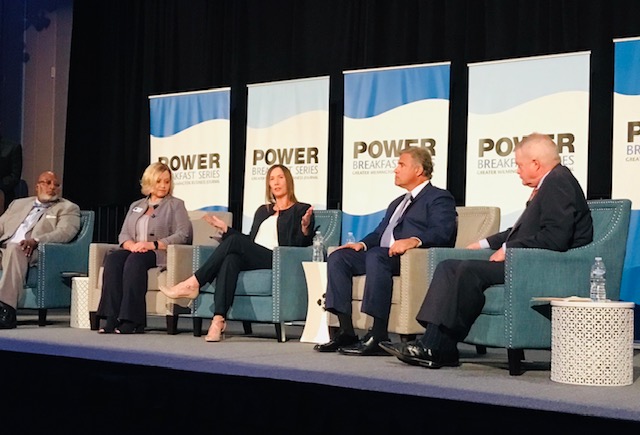 A panel of officials and area organization leaders discussed the aftermath of Hurricane Florence and steps that should be taken to prepare for future storms. (Photo by Maggi Apel)
Regional collaborations, infrastructural repairs and addressing affordable housing are some ways that county officials and organization leaders are looking ahead after last year's Hurricane Florence caused massive damage in the area.

Those items and lasting effects from the storm were discussed Thursday at a Power Breakfast event on "The H Word," hosted by the Greater Wilmington Business Journal.

So far, funds for Florence include $1 billion for public assistance, he said, plus $130 million for individual assistance, and more for hazard mitigation, buyouts and flood insurance.

“There's already been a billion and a half dollars that's been basically put out on the streets from Hurricane Florence,” Sprayberry said.

After Hurricane Florence made landfall in September in the Wilmington area – dumping 8 to 10 trillion gallons of water –surrounding roads, including Interstate 95, I-40 and U.S. 421 flooded, cutting off the region from the rest of the state.

A hydraulics unit within the N.C. Department of Transportation completed a study on those roads to determine what kind of projects they could integrate to prevent them from flooding again, Sprayberry said.

“They're trying to come up with a good plan to make sure that drainage on either side of our mobility corridors is a lot better,” he said.
“I think that we're all coalesced around this one specific idea that I-40 and I-95 have to be raised so we can get people in here and get supplies in here in the aftermath of a hurricane,” added Saffo.

The cost to raise I-40 would be about $156 million, raising I-95 would be up to $300 million dollars, Saffo said. Because of the high cost to elevate I-95, it would be better to fix secondary roads, he added.

One key issue that was further worsened by the storm was the lack of affordable housing in the region, panelists said.

“It was already difficult for people to afford a decent place to live,” Lyle said. “The market usually provides affordable housing for most of us. For the folks who make lower incomes, the market doesn't really provide that.”

The city of Wilmington and New Hanover County initiated a joint affordable housing committee which found that the area had a shortage of 10,000 affordable homes, Saffo said.

“I believe the government at some level is going to have to subsidize some of this,” Saffo said. “I just don't see that we can be able to put 10,000 into the marketplace. But I do believe that we can definitely pick up a certain amount from the developments that are out there by working with them and by partnering with folks to make this happen.”

The Jervay Community, the Glen Apartments and Market North Apartments, housing complexes that vacated tenants after finding damage from Florence, have not made much repair progress, Barfield said.

“Most of those communities are privately owned by individuals and they're trying to figure out how do we make the most amount of money on this particular project?” Barfield said, adding that the Glen might be developed into student housing.

A way to address the housing issue is by creating partnerships with developers and incentivize them to build affordable units,” English said.

“There are some creative examples all over the country of communities that are raising significant amounts of dollars to offer a partnership to a property owner,” English said. “The market is demanding a price in this community and that's great because our people can make money and we can partner with government to make sure that we're providing affordable housing.”

Barfield said one example of these types of collaborations include Project Grace, for which part of the negotiation with Zimmer Development Co., the private development partner on the project, would be to have 10% of apartments within that development deemed as affordable units.

County commissioners are pursuing multiple options for Project Grace, a city-owned block in downtown Wilmington, after having discussions and questions about costs and revenues.

Looking into the future, Saffo said the city and county will jointly hire an affordable housing specialist to get a group together to provide recommendations and options that elected officials can take to bring more affordable homes to the area.

Many organizations, including nonprofits, businesses, faith-based groups and government groups came together during the storm and continue to work on both recovery and preparedness, panelists said.

“One of the big takeaways they said is, 'Don't waste this disaster,'” said Lyle about advice she received that stuck with her. “It sounds kind of weird, but now that everybody is together, don't waste the opportunity to not just get back to where you were but create a new normal. So these recovery groups, they're not just for long-term disaster recovery from Florence there for us to work together to become a more resilient community overall.”

Correction: This version has been updated to correct Michael Sprayberry's title.