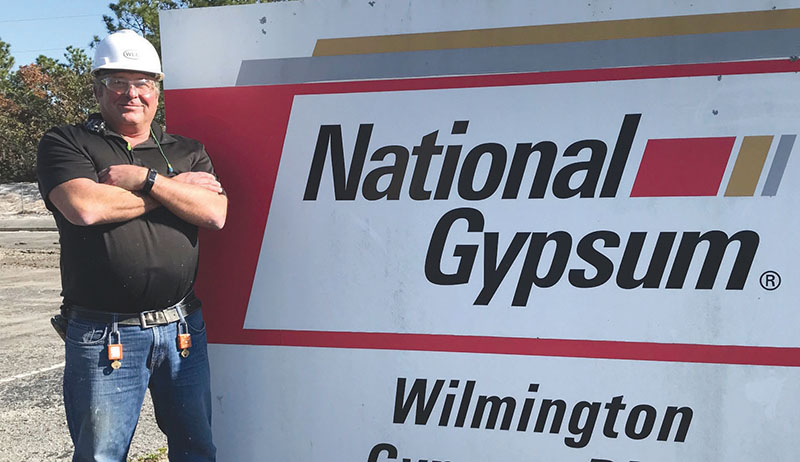 National Gypsum’s Wilmington plant manager Lance Davis stands outside the recently opened facility. (Photo by Christina Haley O'Neal)
New jobs and investment came to the Wilmington area or are in the works because of a series of industrial announcements this year.

For example, Charlotte-based National Gypsum Co. restarted operations at its 46-acre site on Sunnyvale Drive in Wilmington on Nov. 15. The company has employed 45 people, 16 who previously worked at the plant before it shut down in 2009.

The city of Wilmington and New Hanover County approved an incentives package for the company earlier this year. It totaled $580,000 over five years and was tied to the company’s plan to create 51 new jobs with average salaries of at least $57,000 and a minimum capital investment of $25 million.

Pender County had several new industry announcements this year, including one company that’s making a move from its New Hanover County site.

Coastal Beverage Co. broke ground this fall at its 27-acre industrial lot in the Pender Commerce Park to make way for construction of its new headquarters facility. The company plans to move its 140 employees from its current Wilmington location to the new site.

FedEx Freight began construction of a new facility on a 12.5-acre site in the industrial park in mid-2018 with plans to bring about 25 jobs initially. And officials with Acme Smoked Fish, another company currently operating at the industrial park, added 40 employees this summer and announced plans to hire more workers and expand its footprint at the 20-acre site.

A new tenant has begun leasing space at the former facility of cosmetics company Coty Inc., which shut down its Pender operation in 2011.

BlueArrow Warehousing & Logistics LLC, which announced plans to lease a 100,000-square-foot space the Cape Fear Industrial Complex in Rocky Point, has moved in and is currently using the Port of Wilmington, said Steve Yost, president of North Carolina’s Southeast. At the time of the July announcement, the company planned to bring 20 to 50 jobs.

And Mojotone LLC officially set up shop this spring inside a 46,000 square-foot building at Pender Progress Industrial Park in Burgaw. Officials said at the time that Mojotone was the first tenant in phase three of the industrial park in Burgaw. The new space gives the growing company, which has operated out of Pender County since 2005, the ability to double in size.

Wilmington-headquartered MegaCorp Logistics is expanding with its purchase of more than 47,0000 square feet of space this spring. Officials said the firm could grow to 175 employees with the additional space on Ashes Drive.

And Atlantic Packaging announced plans this summer to grow its footprint at its more than 13-acre Wilmington site on North 23rd Street, which could make room for more hires.