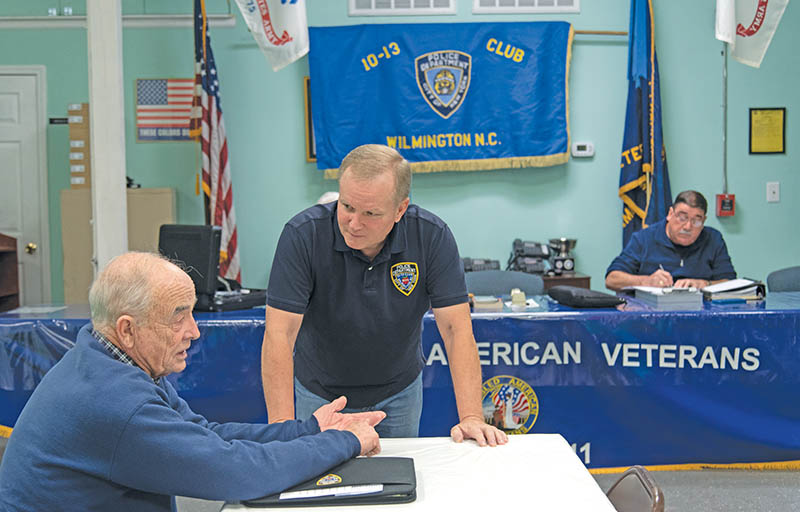 Chuck McLiverty, president of the Wilmington 10-13 Club, talks with past president Cy Oberle before the start of the meeting at the DAV (Disabled American Veterans) building in Wilmington. (Photo by Michael Cline Spencer)
Being retired doesn’t always mean leaving a profession behind completely.

Clubs and associations tied to certain jobs and companies are a way for retirees to remain connected with each other and to information they might need.

For example, the Wilmington chapter of the 10-13 Club, an organization for retired police officers, has a little over 100 members, said president Chuck McLiverty.

In another example, the Wilmington chapter of the GE Retirees Association, for those who worked for General Electric, has about 400 retirees on its email contact list.

In the case of the Wilmington 10-13 Club, most, but not all, retired from the New York Police Department (NYPD).

“We opened it up to non-NYPD retirees from law enforcement agencies regardless of where they were,” McLiverty said.

He joined the Wilmington 10-13 Club in 2009. For the NYPD, the code “10-13” means a police officer needs assistance, and McLiverty said that’s one of the main purposes of the club.

“Sometimes we try to get guest speakers. Other times, I’ll go over things that are pertinent that are coming up, that maybe we should get involved in, directions to go, issues that are pertinent in our pension systems and whatever I get from the national 10-13,” he said.

The Wilmington group is one of three in North Carolina, McLiverty said. The other two are in Charlotte and Raleigh.

The information gets passed on to nonmembers, he said.

“They may not be in our club, but other people from your agency retired here that are looking for information, portals, connections,” he said. “We’re like a source of information for everybody.”

The club’s vice president, Chris Betz, worked for the NYPD for 22 years before retiring as a sergeant. Betz, who has been a member of the Wilmington 10-13 Club for about three years, said the club is also helpful to him to find out and share information about a 9/11 health plan for those who responded to the Sept. 11, 2001, terrorist attacks on the World Trade Center in New York City. The plan was established because of the anticipation that long-term health problems could result from breathing in the toxins produced when the Twin Towers came down.

It’s an important network for Betz and other members.

“Everybody shares information. People in the club, everybody has a different contact back in New York and we gather that information and put it out at the club,” Betz said.

There’s also the social aspect of the club, which meets the third Tuesday of each month in the DAV building on Park Avenue in Wilmington.

“We’re basically there to help each other out, do whatever we can for each other,” McLiverty said, and then added, laughing, “We’re a bunch of grumpy old people, grumpy and opinionated.”

Some members come from Pender and Brunswick counties, with a couple more coming in from Onslow County.

Jim Cutler has been a member of the Wilmington chapter of the GE Retirees Association for 20 years, serving on the board of the organization for about five years. The Wilmington resident of 27 years said he started working for GE in 1963 and was employed at a number of GE facilities before retiring in 1997 as a senior engineer in mechanical design.

He said the group typically has about 10 programs a year, including picnics, and meets at the New Hanover County Senior Center on South College Road in Wilmington.
GE Hitachi Nuclear Energy, established in 2007, and GE Aviation are based in Wilmington.

But for Cutler, the social part of the organization is key.

Cutler said he joined “to meet with people that I’ve known through my work experience and other GE people … but I would say the social aspect of being with people is probably more important. It’s the social part that’s kind of nice.”

Retirees can benefit from the interaction a professional or company association provides.
According to an AARP study on social connections, “Midlife and older adults who volunteer, participate in clubs and attend religious services are less likely to be lonely than those who do not.”

Such groups can also provide them with information they might not otherwise get the chance to hear or read.

For example, once a year, the GE Retirees Association hears updates from leaders at GE units, Cutler said.

“That’s typically one of the bigger meetings,” Cutler said, referring to attendance, which is usually between 75 and 100 for most gatherings.

But the GE Retirees Association also invites speakers to come and share information with the group. This month, the association welcomed Bethany Welch, spokeswoman for N.C. Ports.