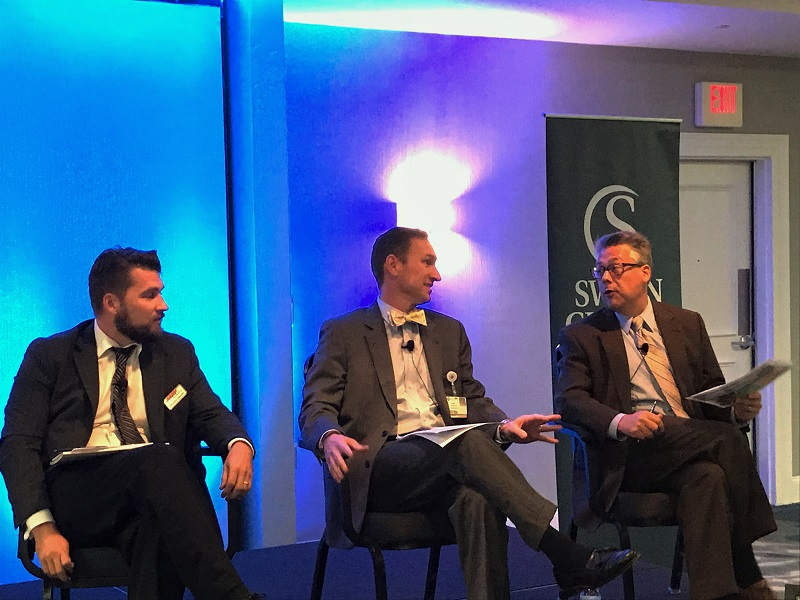 A group of panelists discusses Hurricane Florence and lessons learned during the annual Economic Outlook Conference on Wednesday. (Photo by Christina Haley O'Neal)
The Wilmington region’s track toward a stable economy was disrupted by Hurricane Florence, according to an economic outlook shared Wednesday.

Adam Jones, regional economist at the University of North Carolina Wilmington,
presented the area's economy in two different scenarios before a panel discussion during Wednesday morning's economic outlook conference: the regional economy prior to Hurricane Florence, which made landfall Sept. 14, and the economy post-storm.

“The world pre-storm was a story of an economy that was recovering right on track as you would expect and settling into one of those perfect 70-degree sunny days, with just a light breeze,” Jones said. “We were headed to exactly where we wanted to be, and then the storm came and everything has been thrown off, at least temporarily.”

Gizdic was one of three people who spoke about storm mitigation and lessons learned during the conference's panel discussion at the annual conference, which highlighted the impacts of the hurricane on the local economy and organizations.

For the hospital, volumes were off by 50 percent in September, Gizdic said.

For mitigation efforts, Gizdic said he would like for the organization to join with the state in working toward a statewide evacuation plan as it relates to health care. This is after seeing what Hurricane Michael did to Panama City just weeks later, similar to the destruction previously forecasted for Florence as a major hurricane.

There were 500 patients in the hospital during the storm and 200 were safely discharged or moved to other hospitals prior to the storm, he said.

"If [Hurricane Florence] had hit at the level expected, we would have needed to evacuate hundreds of patients," Gizdic said.

There were nearly 2,000 staff and providers at NHRMC, who sheltered in place during Florence. And 300 hospital employees have since been displaced, he added.

"One of the other lessons learned is to take care of your people, making sure whether it's during the event or after the event, that you're there for your people," Gizdic said. "Health care is a people business; people are our No. 1 asset, and so maintaining that workforce and keeping them together is extremely important for us."

Of those funds, plans are being developed for a "small percentage" of $1.14 billion in state Community Development Block Grant (CDBG) funds, Coudriet said.

“We made a specific ask of the legislature as well as the governor's office to appropriate directly to us community development block grant money so that we can put that quickly into play in our community and help rebuild the housing stock that we have lost,” Coudriet said.

Housing has become a big challenge for New Hanover County post-storm, Coudriet said. And the county would like to use the CDBG funds to focus on both its housing and building a more resilient infrastructure, he said.

Coudriet also highlighted the need to revisit the county’s shelter policy and the schools utilized for those shelters. The county is also re-examining the use of auxiliary generators to keep things like the county’s emergency center running through multiple days without power. And perhaps contracting that out.

Michael Olender, manager of outreach and advocacy at AARP North Carolina, said that the organization was able to, at the state office level, get information out to members during and after the storm through telecommunications.

And post-storm, the group was able to reach out to notify members of charity fraud.

A lesson learned: more resources are needed at the state level during a disaster to support those calls and a long-term strategy to become a part of the network of support post-storm, Olender said.

"We need to think much more long-term because you know, these storms, the last two major storms we've had -- Matthew and Florence -- these are supposed to be 500 years apart and they're not," he said.

During his economic outlook talk, Jones said that prior to the storm, the economy was moving toward a stable growth rate.

Unemployment continues to go down and although the region isn’t seeing the same growth in wages, with most being from new hires, that could pick up as pressure is put on employers to keep their talent, Jones said.

“We're back to what you might call full employment in this region, just in time to be thrown off track again,” Jones said.

The property damage, business disruption and outside perception of the area after Florence have all impacted the regional economy, Jones said.

In business disruption, economists at UNCW have found that lower-category storms tend to disrupt business “on the order of about 1 percent of Gross Domestic Product," Jones said.

"This storm was particularly bad, with a longer disruption. So you're probably talking about 2 percent -- that's a sizable hit when you're thinking ... '4 percent growth is a lot, and then we lost about 2 percent of it?' That's a strong hit to the region," he added.

Going forward, Jones said home prices will continue to rise. There will be a little bit of a bump, however, from the constraint on the supply over the next year, until inventory comes back online from the storm. And with that, the area is also expected to see construction employment increase.

The region can also expect to see GDP increase, he said, meaning economic activity and spending will increase.

"But I want to put out a big word of caution here that is not necessarily a good thing. Be aware of what we refer to as the broken window fallacy. Yes, there's a lot of spending going on, but replacing drywall in my living room is not what I want to be spending it on," Jones said. "The numbers look good. My quality of life doesn't quite match those numbers. So that's the caution here."