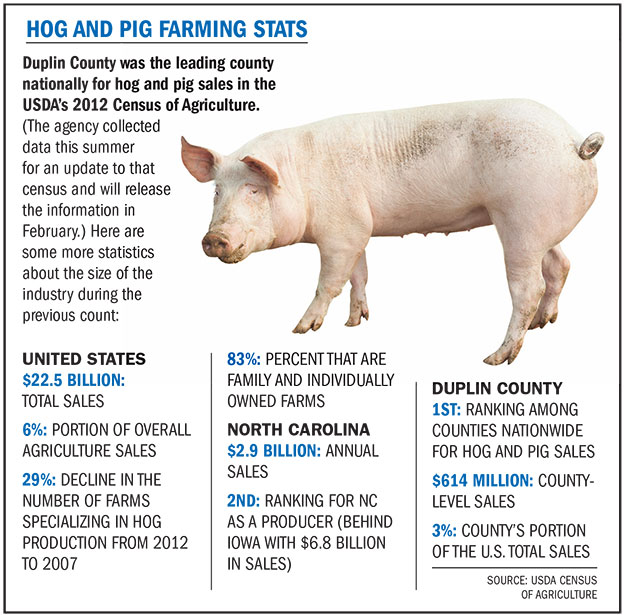 Those who have ventured into some of the more rural areas of Southeastern North Carolina at some point may have noticed the distinct smell of nearby hog farms. The farms’ odors typically present just a blip on drivers’ radars as they pass through, windows up and in the confines of air-conditioned vehicles.

But for residents and businesses in immovable proximity to industrial- scale hog farms, the issue of hog waste smell has made its way to the court system.

According to a number of lawsuits filed by some of the neighboring residents, the industrial farms can prevent people from enjoying the outdoor areas of their homes, attract swarms of flies and lead to health problems. Add to that the noise of trucks used to transport hogs and other heavy equipment used to operate the farms, as well as buzzards attracted by deceased hogs, and life near these large farms can become quite unpleasant, plaintiffs argue.

Meanwhile, critics of the legal filings say the cases threaten family farms and potentially other agriculture operations beyond pork producers.

The matter is the subject of several multimillion-dollar lawsuits levied against Wallace-based Murphy-Brown, a subsidiary of the world’s largest pork producer, Smithfield Foods. In two cases decided earlier this year, juries returned eight-figure outcomes in favor of the plaintiffs, and more than 20 lawsuits remain to be tried.

At the center is how some farms treat hog waste, flushing it into large, open-air lagoons and then spraying the liquefied waste onto nearby fields as fertilizer for row crops. Aside from the odor created by the waste, plaintiffs contend that the sprayed waste can carry across property lines.

Other hog-producing states such as Missouri have adopted regulations that require farms to contain waste in covered lagoons.

Smithfield Foods, which describes itself as a “$15 billion global food company and the world’s largest pork processor and hog producer,” has argued that implementing different means of dealing with hog waste presents an unfair burden to their operations.

Estimates of updating North Carolina’s hog farms with technology and facilities to reduce the ill effects of waste are about $1 million per farm.

In the first case decided in April, a federal jury awarded about $51 million to 10 neighbors of Kinlaw Farm in Bladen County, a farm contractor of Murphy-Brown.

In May, U.S. District Judge Earl Britt, who presided over the case, reduced the award to $3.25 million.

A case decided in June resulted in a $25 million award to Duplin County residents Elvis and Vonnie Williams who live near a Murphy- Brown contract farm owned by former Beulaville police chief Joey Carter. If the Williamses’ judgment is reduced in the same manner as the first case’s reduction, the penalty to Murphy-Brown/Smithfield Foods would drop to $630,000.

With North Carolina ranking as the second-largest hog-producing state in the country behind only Iowa, the state’s top politicians have waded into the fray.

On July 10, Lt. Gov. Dan Forest and Agriculture Commissioner Steve Troxler, both Republicans, along with a handful of state senators and representatives, visited Carter’s farm near Beulaville for a news conference.

An estimated crowd of about 1,600 area residents attended, many holding signs with messages such as, “No Farms, No Food,” in support of Carter, Murphy-Brown and Smithfield Foods.

“We want to be sure that we do everything that we can to invest in agriculture, and we want to be sure that we are supporting you in every way that we can,” Forest told the crowd, according to a video online of the rally. “Because we know that it’s lawsuits like these that are going to put our family farms out of business. That end up ruining the economy of North Carolina for tens of thousands of workers. And so we want you to know that we are here to support you.”

In June, the N.C. General Assembly passed a new state Farm Act (Senate Bill 711) that restricts when and how neighbors of farms can bring nuisance claims. The measure could not affect or dismiss the lawsuits already filed.

“While agriculture is vital to North Carolina’s economy, so property rights are vital to people’s homes and businesses,” Cooper said in a statement when issuing his veto. “North Carolina’s nuisance laws can help allow generations of families to enjoy their homes and land without fear for their health and safety. Those same laws stopped the Tennessee Valley Authority from pumping air pollution into our mountains. Our laws must balance the needs of businesses versus property rights. Giving one industry special treatment at the expense of its neighbors is unfair.”

On June 27, primarily Republican lawmakers used their majorities in both houses of the General Assembly to override Cooper’s veto.

“Overriding this veto and correcting Gov. Cooper’s unwise decision sends the clear message to our family farmers and rural communities that they have a voice in the legislature and that this General Assembly intends to give them the respect they deserve,” Sen. Brent Jackson, a co-sponsor of Senate Bill 711 who represents Duplin County, said in a statement. “This was never a partisan issue or about politics, but about doing what is right, and I am glad we had bipartisan support in both chambers as we stand up for our farmers.”

It claimed that the court should have allowed the jury to visit the plaintiffs’ properties and Kinlaw Farm and to hear additional evidence including its expert’s odor-monitoring tests. The statement also called into question the validity of the lawsuits.

“From the beginning, the lawsuits have been nothing more than a money grab by a big litigation machine,” Lombardo said. “Plaintiffs’ counsel at the trial relied heavily on anti-agriculture, anti-corporate rhetoric rather than the real facts in the case. These practices are abuses of our legal system, and we will continue to fight them.”

Testimony in the third lawsuit against Murphy-Brown/Smithfield Foods, brought by neighbors of a Pender County farm, began July 11.