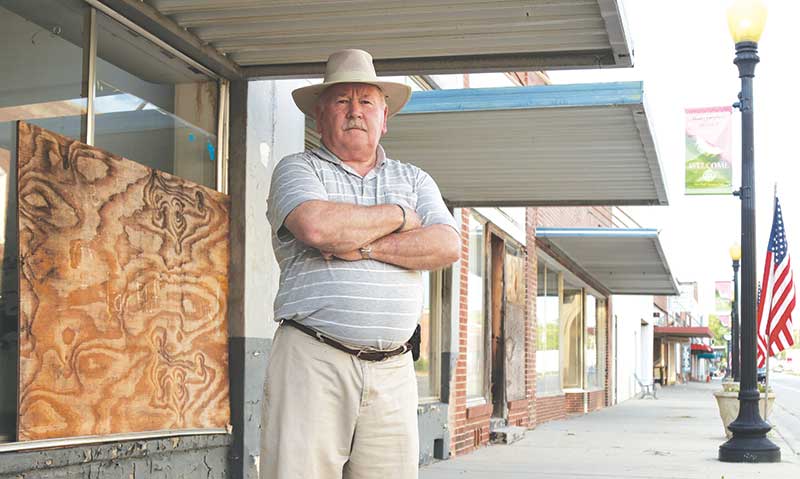 Billy Hammond, the mayor of the Columbus County town of Fair Bluff, said much of downtown Fair Bluff is still vacant a year and a half after Hurricane Matthew’s rains flooded its streets. (photo by Grant Merritt)
Floodwaters can rise quickly, but recovering from a storm like Hurricane Matthew, which brought high winds and devastating flooding in October 2016 to Eastern North Carolina, can take a lot longer.

And recovery efforts extend not just to impacted residents but also to the local economies of affected cities and towns.

That’s especially true for those in Columbus County, which according to 2017 U.S. Census estimates has a population of about 56,000.

“I think the process has been really slow,” said Amon McKenzie, chairman of the Columbus County Board of Commissioners. “It seems like a lifetime for the victims involved.”

Assessments after the storm showed that nearly 1,100 structures had damages ranging from minimal to destroyed, according to the state’s Hurricane Matthew Resilient Redevelopment Plan for Columbus County.

But “there is light at the end of the tunnel,” McKenzie said.

At a recent N.C. Association of County Commissioners meeting, McKenzie said, officials said they have not forgotten Hurricane Matthew’s impact.

“They are going to make some permanent decisions that will probably put us in a position that if this happens again, we’ll be better prepared for it and that part I like,” McKenzie said. “It’s been a slow process, but I do believe that now things are beginning to come together.”

This year’s hurricane season began on June 1. Also in June, N.C. Emergency Management officials said 290 homeowners in the state with homes damaged by Hurricane Matthew would receive about $38 million in federal and state funds, on top of previous aid already given statewide to other homeowners earlier this year.

This financial assistance, through the Hazard Mitigation Grant Program, includes about $5.7 million to elevate 45 homes in all Columbus County jurisdictions. That includes about $188,000 to elevate one home and one acquisition in Whiteville, and about $4.6 million for 17 elevations and 20 home reconstructions in Fair Bluff.

A TALE OF TWO TOWNS 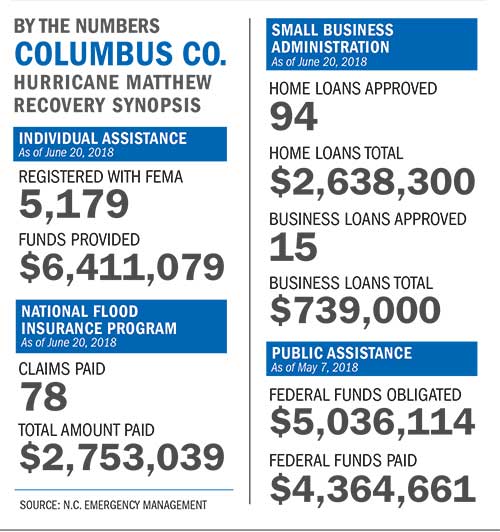 Hurricane Matthew made landfall as a Category 1 storm in South Carolina early on Oct. 8, 2016, and resulted in nearly two days of heavy rainfall, with 8 to more than 15 inches in parts of Eastern North Carolina, according to a report on the storm produced by the state.

The floodwaters impacted other areas in the Cape Fear region, including Pender County. State emergency officials estimated that the storm caused $1.5 billion in flood damages statewide.

The storm’s major devastation to Columbus County’s businesses, however, is particularly evident in Fair Bluff and Whiteville, which were heavily impacted by the hurricane.

Because of the flooding, the small Columbus County town of Fair Bluff made national news during and in the wake of Hurricane Matthew.

“We’re down to about 550,” Fair Bluff Mayor Billy Hammond said in June.

More than 100 homes were destroyed, and downtown Fair Bluff is still largely vacant. But one business flooded in the storm, a Japanese restaurant called Yokos, opened back up in March last year, Hammond said. Only seven businesses in Fair Bluff were insured, according to the state’s redevelopment plan for Columbus County.

Among the bright spots after the storm is the reopening of a grocery store in the town. The building that used to house a Piggly Wiggly was renovated, and owner Dewey Hill reopened it as an independent store called Hill’s Supermarket.

In other progress, last year, the Golden Leaf Foundation awarded a $1.7 million grant to Fair Bluff to add on to a former BB&T building for its town hall, police department and a new visitors center.

Whiteville, the county’s most populated town and the county seat, has shown a “tremendous amount of resiliency,” said Whiteville City Manager Darren Currie.

The city has focused on its infrastructure, recognizing the need to upgrade the city’s stormwater system, for both businesses and city residents, Currie said. “Stormwater is really one of the last things you think about … until it’s too late. We’re trying to go back and work on those issues,” Currie said.

Hurricane Matthew caused historic flooding in Whiteville’s downtown municipal service district (MSD) and surrounding residential areas, with 70 businesses and more than 200 residences in the affected area, according to the Golden Leaf Foundation. 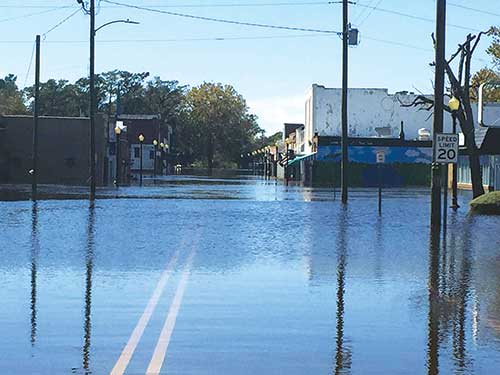 The city received $150,000 from the foundation to determine flooding issues and another $400,000 for its downtown MSD for stormwater improvements. Whiteville City Council has also approved $150,000 in seed money to begin to look at an overall citywide stormwater program, Currie said.

In addition, the city is working to further its business and economic development efforts. While a lot of the city’s businesses are back up and running, and some businesses were gained, others were lost, Currie said.

There are several business development strategies underway for the city, including applying for the state’s Main Street program. It’s the city’s third attempt to get into the program, Currie said.


State officials say various programs and funding sources have been supporting recovery efforts. So far, more than $650 million has been spent to help people and communities in North Carolina impacted by the storm, state emergency management officials said in June.

Those with damaged homes have been encouraged to complete applications for help through the Community Development Block Grant-Disaster Recovery (CBDG- DR) program. This is the largest CDBG-DR program ever operated by North Carolina.

Additional application centers opened this month, including in Columbus County.

On the business side, a nonprofit organization is aiding small business recovery efforts. Since Hurricane Matthew, seven communities in the state, including Fair Bluff and Whiteville, have been selected to participate in the N.C. Rural Center’s Small Business Recovery Program.

While short-term funding assistance through the program was deployed shortly after the hurricane, another of the nonprofit’s initiatives is leading long-term efforts by aiding additional means of funding through a small business recovery fund and long-term planning assistance, said Barry Ryan, vice president of the N.C. Rural Center.

“That is the deeper work we’re doing in these seven communities … where we’ve formed teams and gone in and are providing capacity building and training and a program that we bring to those communities to help them utilize small business and entrepreneurship development as a recovery strategy,” he said.

One tool is a revolving local loan fund of $100,000, through which local authorities manage the decision- making process to encourage small business development, he said.

Whiteville is working on its long-term efforts with the organization. Those efforts dovetail with the city’s recent business development initiatives and an economic development planner position the city posted in June, he said.

Fair Bluff is working on its infrastructure recovery, part of its small business strategy assisted by the program, Ryan said, adding that the town has “a longer way to go because they were hit much harder.”
There are still resources out there to help support small businesses in the municipalities, Ryan said.

“One thing about Columbus County, we are very resilient,” McKenzie said. “We’re used to hardships and those kinds of things. We never let them take us out.”