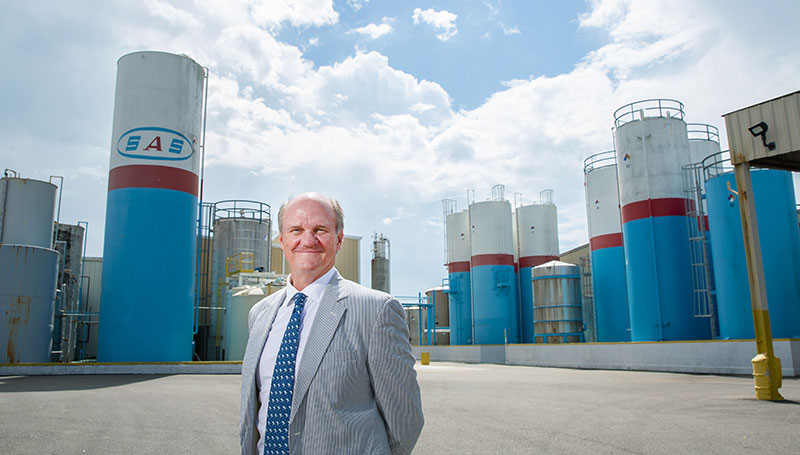 Its proximity to major highways, rail and water, including the port, makes the area a strategic location for the company, on top of being in the mid-Atlantic region, which provides access for a wide range of distribution, said Frank Hamilton, president of SAS.

“In our business, the more lanes of transportation that you have available for inbound and outbound, the better off you are … Then you have a lot of different ways you can bring materials into the facility, as well as out of the facility,” said Hamilton, who bought the company in 1991.

Wilmington-based SAS is a contract manufacturer with three other locations in Houston, Texas, and a fourth facility there under construction this year. It makes automotive products, including lubricants, coolants and transmission fluid, as well as agricultural products, Hamilton said. Its clients include large oil companies such as BP, Valvoline, Shell, Phillips and ExxonMobil.

SAS is one of many different companies, big and small, ranging from manufacturing and distribution to retail, currently operating on the U.S. 421 industrial corridor in New Hanover County.

The addition of the I-140 bypass and plans for water and sewer infrastructure, however, have been touted by local leaders and economic developers as the next step to bring even more private investment and jobs to the county, increasing its tax base.

“New Hanover County’s strategic plan emphasizes the importance of increasing the diversity and number of higher-wage jobs with more advanced manufacturing, knowledge sector and skilled trade jobs available locally,” said New Hanover County Manager Chris Coudriet. “The infrastructure improvements along 421 will help bring more industrial and commercial opportunities to that corridor, which is good for economic development and good for our citizens.”

The county is funding some of the new infrastructure in the amount of $525,000 for the next three fiscal years, which began in the 2017-18 Fiscal Year, in an agreement with the Cape Fear Public Utility Authority to bring fire flow to the corridor.

CFPUA in January awarded a $12.8 million construction contract to T.A. Loving Co. for the water and sewer project, which will extend up the corridor to the Pender County line. According to the utility, the contractor could break ground in June.

“In our opinion, it will be a very strategic type of corridor for targeted economic development and for probably certain types of business that we might target … as part of the overall micro-region marketing,” said Yost, adding that good candidates for the sectors of industry for the corridor include advanced manufacturing, distribution or assembly.

Tyler Newman, president and CEO of Business Alliance for a Sound Economy (BASE), also said that’s the “key corridor” for the region’s future of industrial growth.

SAS, with 66 full-time employees and 26 temporary positions in Wilmington, is one example of regional employers along that industrial corridor that see a benefit to the infrastructure.

SAS has also connected to an already existing CFPUA waterline this year, which has increased its water capacity and production capabilities.

The infrastructure “wasn’t vital to the existence of the business back in 1971. But those improvements have been fortunate benefactors to this business,” Hamilton said.

SAS built sewer line tie-ins at its new 13,815-square-foot office building, which was constructed last spring, in preparation to connect to the new sewer lines coming in.

“Having water out here is going to have two benefits: one is the quality of the water and the other is the well water is really acidic and eats up all the copper pipes, so having a stable quality of water both for consumption and manufacturing processes is a definite plus. And the same way with the sewer,” he said.

Fortron Industries, a large employer in the corridor, has said it does not have plans to connect to the water line, according to officials with the joint venture company. It also has its own waste treatment facility on site, “and therefore has no plans to utilize the sewer services,” officials said.

Don Harley, senior vice president of Wilmington-based commercial real estate firm Colwell Banker Commercial SunCoast, who has worked on deals in the corridor since the 1990s, said the infrastructure, once installed, is likely to bring more companies that bring in hundreds of jobs.

“As of now, without infrastructure, you can’t support a company like that,” Harley said. “In the near future, I think we are going to see smaller flex buildings accommodating general contractors, landscapers, electricians, plumbers and supply houses, who are going to want to occupy out there because of the proximity to I-140 and being able to get anywhere in the three-county area in minutes.”

New development is on the way. Harley said three buildings are planned at about 12,000 square feet each.

“We hope to turn the key in the door on those probably late November, early December. Initially, the first building will be speculative. However, we’d most likely entertain build-tosuits or pre-leasing opportunities to get the other two started and completed,” Harley said.

Move-in ready space and land available for purchase along the corridor are getting scarce and real estate values are increasing, along with the costs of construction, he said.

CFPUA documents state that there are nearly 1,000 acres of developable land off U.S. 421.

“There’s a big difference in land versus … ready sites. The ownership of those properties will have to look at turning some of that acreage into a serviceable industrial site,” Yost said.

Newman said economic developers, including those with Wilmington Business Development, are already at work to encourage major investors in the corridor. Another piece to that is the county’s new Unified Development Ordinance (UDO), which seeks to unify and modernize the rules for development, he said.

“From an economic development standpoint that’s where BASE has been focusing its time .... because that’s going to be the rules of the road,” Newman said, adding that it will play a role in getting business out of the ground and operating.

Another economic development group has also been advocating for development in the corridor, but calls for a more balanced approach to its sustainable development.

Cape Fear Economic Development Council board member Clark Henry said that at the group’s community workshop on sustainable development on U.S. 421 in March, attendees discussed a wide range of ideas, including public health issues along with job growth.

“We wanted to kind of help bring both of those perspectives together,” he said. “CFEDC feels that it’s critical that we grow our job base and support our existing job base, but we also understand that our environmental and public health is a critical asset that is required to sustain and grow business.”

That workshop led to the group’s position statement on development along U.S. 421, which recognizes the area’s opportunity to grow the economic base, but calls on the public and private sectors for additional planning, prioritization and investment and offers itself as a partner.

Newman said that area officials need to be “looking at everything from an industrial manufacturing standpoint.”

“We really need a thriving industrial manufacturing sector in that commerce zone,” he said. “And we need the biggest mix of possible job creators that we can get.”