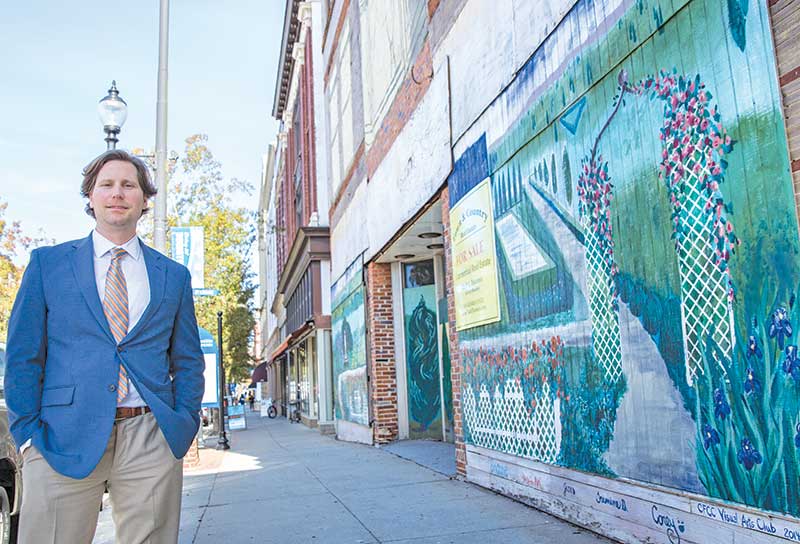 Lashley, owner of Big Ideas LLC, the firm that renovated the Roudabush building in downtown Wilmington, was speaking with an engineer friend who had just bought some properties of his own.

“He was saying he’s quite confused about it,” Lashley said of his friend’s understanding of the new law.

With so many business owners flipping through the legislation so fast, you might think they’re reading a John Grisham novel. That’s because the 1,097-page Tax Cuts and Jobs Act of 2017 represents the biggest overhaul of the nation’s tax code since 1986 and contains revisions and additions that can seem downright mysterious.

With April 15 looming, owners of businesses are not only consulting with CPAs about their 2017 returns but are also starting to decipher provisions for the 2018 tax year that could affect their operations for years to come.

While businesses should never make strategic decisions solely on how much tax they pay, recent changes in policy make it critical that companies examine the implications of the new tax law closely, said Adam Shay, managing partner of Adam Shay CPA.

“Even busy CPA firms should make the time” to handle the kinds of longer-term analysis that clients need to make sense of the 2018 provisions, Shay said.

Already, some CPAs and attorneys have held workshops to help businesses come to grips with the law, including one at University of North Carolina Wilmington’s Center for Innovation and Entrepreneurship, attended by 19 owners and staff of small- and mid-sized firms.


“The math of minimizing your tax burden as an entrepreneur has changed … drastically,” Andrew Frye, of Pronto Tax School at tek- Mountain, told the CIE audience before Shay spoke.

For owners of S corporations, partnerships, LLCs and sole proprietorships, one of the most appealing provisions of the law is a sweetened pass-through deduction, which on its face is considered a tax-savings bonanza.

As “flow-through” entities that pass business gains and losses to owners’ individual returns, companies can benefit from a new 20-percent deduction on taxable income if the owner makes less than $157,500, or joint filers less than $315,000 – in essence giving owners a preferred income tax rate.

But when an owner’s taxable income exceeds these thresholds, deduction phase-outs kick in, which Shay said could become costly for some medical, dental or law practices.

“You can start paying 70 percent on each dollar you generate” in some cases, he said.

Architectural and engineering firms have received special treatment, Shay noted, and are not subject to as severe a phase-out as other service-based businesses.

In addition, “Your rental income may qualify for the 20 percent deduction” regardless of the firm’s eligibility if the rent is paid to a separate entity held by the same owner, he said.

Complicating matters, though, is the flat 21 percent rate on C corporation income, which flow-through entities did not receive in the legislation.

Shay said C corporations may be worth a look given the 21 percent rate, “especially if you are pumping profits back into operations” or if a business wants to attract investors, who tend to favor C-corps.


While commercial real estate is a winner, tax reform has caused some heartburn among supporters of historic preservation.

The 20 percent tax credit for renovation of historic properties was retained, but its benefits must now be spread over five years and can no longer be taken in full as soon as renovated commercial space opens.

Lashley, who updated the South Front Street building in which The Husk bar is located, thinks the change could jeopardize the sale of preservation tax credits, often part of renovation financing.

“If you were to sell them … that could make people a little more cautious,” Lashley said.

Tony McEwen, assistant to the city manager for legislative affairs, believes the change “makes the program less enticing … that does remain a concern.”

McEwen said Wilmington Mayor Bill Saffo and council members will ask what might be done to reinstate the original version of the credit during a visit with the state’s congressional delegation in March.

“Although the tax credit was slightly reduced in the tax reform package, the Historic Preservation Tax Credit will continue to help meet these revitalization goals with a greater emphasis on commercial retail and office projects,” Ed Wolverton, president of Wilmington Downtown Inc., said in a statement.

Since 1976, the federal credit has resulted in about $39 million being invested in 158 income-producing buildings in the city, Wolverton said.


Among CPAs, the prevailing wisdom is that commercial real estate investors are the big winners of tax reform, which could help fuel more office and retail development.

Michael Waldrop, an investment real estate broker at Raleigh-based Waldrop Properties who represented the buyer in the recent sale of the Wells Fargo-anchored building in downtown Wilmington, called tax reform “huge from a lot of perspectives.”

“That 20 percent deduction is big,” he said, as real estate investment is generally conducted using flow-throughs.

Further, the Section 179 deduction – essentially doubled to $1 million – broadens the types of new and used real property that qualify for the allowance, including things such as HVAC and security system installations.

The change will “spur more interest also in some value-added real estate,” Waldrop believes. “This will be really good for the economy all around; that creates more opportunities for the trades.”

The broadened section also mentions property used to furnish commercial lodging, which could help projects such as the Hilton Wilmington Riverside’s facelift and conversion to the Hotel Ballast Wilmington brand, as an example. The hotel’s owner, Sotherly Hotels, declined comment.

Further, bonus depreciation, considered a companion to Section 179, now covers both new and used equipment and can be taken at 100 percent.

“All of this means it will be easier to expense business equipment in the first year,” Shay is telling clients.


The area’s residential market might experience some modest growth attributable to tax reform, but most growth will occur as a result of market factors and buyer emotions, said Kathleen Baylies, broker-in-charge at Just for Buyers Realty.

With more take-home pay kicking in this year along with a larger standard deduction of $24,000 for joint filers in next year’s returns, “I’m sure some people will simply absorb the additional money into their daily finances, perhaps treating themselves to a splurge or two,” Baylies said. “But the strategic thinkers will leverage those extra dollars to become homeowners.”

As for the new cap on mortgage interest deduction – now pegged to a $750,000 mortgage, not $1 million – “I don’t believe the cap will be a make or break factor for most high-end buyers,” she said.


A recent National Association of Manufacturers’ survey indicates that 63 percent of its members think tax reform will encourage them to spend more on facilities and equipment.

Wilmington’s Atlantic Packaging, which converts tons of rolled paper into packaging materials for industrial and retail uses, is acting.

“We’re going to have some additional dollars to invest in the company and to invest in our people,” company president Wes Carter told The New York Times.

“We have plants investing in more capital equipment” starting this year, he said.

In January, the company announced $1,000 bonuses for each of its approximately 1,000 employees in the U.S. and abroad.

Despite calls to abolish the tax-exempt status of Private Activity Bonds used by large institutions to finance infrastructure, Congress retained their tax-preferred nature, leading to sighs of relief at Wilmington International Airport.

“Without the PABs [Private Activity Bonds], the $20 million decks would have an additional $4.1 million in financing costs over the 25-year bond,” said Julie Wilsey, the airport’s director.

Waldrop said he believes “knowledge is power” and thinks any professional who takes time to understand the Tax Cuts and Jobs Act can get a leg up on the competition.

Shay agrees, saying the thousand-page-long law creates “multiple traps for the unwary” and that spending quality time with a CPA is imperative.

To get the full benefit in the 2018 tax year in next year’s filings, he warned, “You don’t want to wait until fall.”