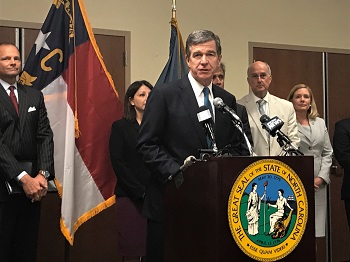 Gov. Roy Cooper was in Wilmington on Monday to discuss GenX and several steps the state is taking to look into the region's water quality issue. (Photo by Christina Haley O'Neal)
Gov. Roy Cooper announced Monday that he has instructed the N.C. Department of Environmental Quality to deny the discharge of GenX by The Chemours Company.

Cooper, along with local and other state officials, met for roughly an hour Monday morning at the New Hanover County Government Center to discuss the state’s next steps on the GenX issue. Following the meeting, Cooper was joined by those officials in a briefing with media and community members.

The announcement to deny part of its permit that allows the discharge of GenX, was one of six steps the governor said the state is taking to ensure public water quality. Another of those steps is having the State Bureau of Investigation look into a potential criminal investigation.

Cooper said the state is committed to identifying any potential legal and regulatory action involving Chemours, the company being pointed to as the source of GenX, an emerging contaminant found in the Cape Fear River and the Cape Fear Public Utility Authority’s water supply.

“I want to make it clear today that the Department of Environmental Quality is going to deny Chemours’ request and to deny their permit to release GenX into the Cape Fear River. Chemours has shown that it can capture and incinerate GenX without discharging into the water,” Cooper said.

State officials have linked GenX to the Chemours plant located at the 2,150-acre Fayetteville Works site along the Cape Fear River located 71 miles north of Wilmington. On June 20, Chemours announced that the company would “capture, remove, and safely dispose of wastewater that contains the byproduct GenX generated from fluoromonomers production at its manufacturing plant in Fayetteville.”

In response to the governor’s remarks regarding potential investigations and the GenX permit issue, Chemours spokesman Gary Cambre said in an email Monday, “Chemours continues to work closely with local, state and federal officials to determine the appropriate next steps.”

The SBI will be working with the N.C. Department of Environmental Quality (NCDEQ) and the EPA to determine if there is evidence of criminal violations of the either permit or federal consent order allowing Chemours to discharge GenX, Cooper said.

Ben David and Jon David, district attorneys for the state’s 5th and 13th prosecutorial districts, respectively, issued a response to this announcement. The district attorneys stated they will be working closely with officials to determine if there is any evidence of criminal violations, being that their two districts combined cover the areas affected by GenX.

Cooper said levels of the chemical have been slowly trending down. Those numbers have been reflected through the NCDEQ testing, which began in June, for GenX at 12 sites along the lower Cape Fear.

Other areas Cooper laid out during his speech, was the need for state and federal officials to review the permitting and health standards related to GenX and other emerging contaminants.

Locally, the governor has instructed NCDEQ officials to require enhanced disclosure from companies seeking permits to “make sure that we know all about all of the chemicals or compounds that are being discharged and that these compounds are not being disguised,” Cooper said.

In the federal realm, Cooper called on the Centers for Disease Control and Prevention, to conduct a study of the long-term health effects of GenX.

“The CDC has the expertise to conduct complex exposure modeling that will give residents a better understanding of any potential health risks from the last 30 years,” he said.

The EPA has also been requested to complete a health assessment of GenX that will help North Carolina and other states around the country set regulatory standards, officials said.

Currently, a federal consent order prohibits Chemours from discharging GenX as a “manufacurate,” Cooper said, but it does allow the company to discharge the chemical as a byproduct. He said that he wants the EPA to consider whether that consent order needs to be updated.

Cooper said he is expanding the scope of the state’s science advisory board to work on issues surrounding unregulated compounds to determine any threats to the public and help officials get a better understanding of the emerging compounds.

The governor added that this issue has brought to light the need for more state water inspectors, scientists and additional people to help review permits for NCDEQ.

When state lawmakers return to Raleigh in August, the governor said he’s working to put forward legislation that asks for emergency resources to hire more NCDEQ employees, including state water inspectors, chemists and engineers for the department, and create a water health safety unit for the division of public health.

Michael Regan, secretary of the N.C. Department of Environmental Quality, gave a rough estimate of about $3 million needed in funding to make up for salary cuts, sampling analysis to continue to follow GenX and other emerging contaminants and hiring additional personnel.

“DEQ has taken significant cuts over the past five to six years,” Regan said during the press conference. “So, this by no means is a perfect number, but this is a conservative number that would get us in tighter shape.”

Correction: This version of the story clarifies the portion of Chemour's discharge permit that Gov. Cooper is calling to be denied.