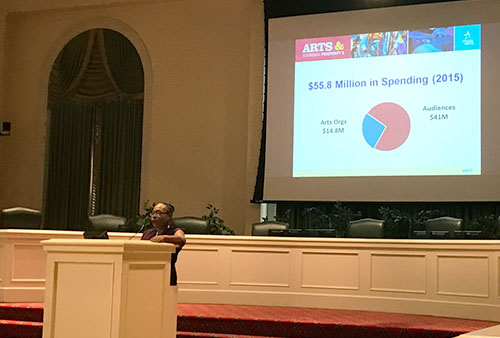 Rhonda Bellamy, executive director of the Wilmington and Arts Council of Wilmington and New Hanover County, goes over a new report about the arts' local economic impact during a press conference Monday at City Hall. (Photo by Suzanne Cosgrove)
An economic impact study conducted in New Hanover County found that the nonprofit arts and culture industry generates $55.8 million in overall economic activity and supports 2,076 jobs annually.

Officials with the city of Wilmington and Arts Council of Wilmington and New Hanover County unveiled results from the latest Arts & Economic Prosperity report Monday at City Hall. The research was performed by Americans for the Arts, a national nonprofit, according to a news release.

The report found that nonprofit arts and culture organizations spent $14.8 million in the county

during the 2015 fiscal year. That spending included things such as the payment of employees, purchase of supplies and contract for services. In turn, $44.1 million was generated in household income, and $5.6 million in local and state government revenues.

Rhonda Bellamy, executive director of the arts council and coordinator of the local study, said in the release that the findings confirm that the arts are a major economic driver in New Hanover County.

“We’ve just got a lot going on, and the more that happens and the more energy we get around the arts, the more we’re able to showcase the region as an arts destination, the more we can pull in the cultural tourists who stay longer and spend more,” Bellamy said Monday at the press conference.

Local businesses were found to be impacted by the nonprofit arts and culture industry.  Attendees to cultural events often spend money on parking, dinner, child care and gifts and souvenirs, leveraging $41 million in event-related spending by audiences, the report stated.

“Arts definitely are the cool factor,” Saffo at the press conference.

Robert Lynch, president and CEO of Americans for the Arts, said in the news release that a vibrant arts and culture industry helps local businesses thrive.

“Leaders who care about community and economic vitality can feel good about choosing to invest in the arts,” Lynch said. “Nationally as well as locally, the arts mean business.”

Susi Hamilton, secretary of the N.C. Department of Natural and Cultural Resources, is traveling around the state to help unveil results of the study in different regions and spoke at Monday’s event. She stressed that arts and culture are in fact economic development tools and a catalyst for economic activity.

“It’s a huge opportunity for the state of North Carolina to look at what the arts bring,” Hamilton said.