The (Not-So) Simple Business Of Water 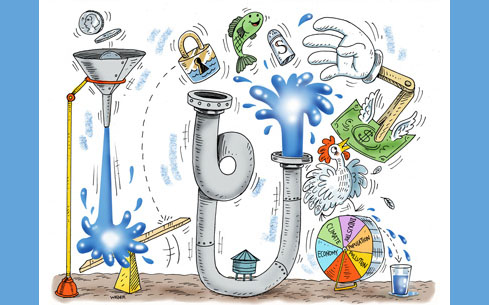 (Illustration by Mark Weber)
It takes thousands of miles of pipes to get water to homes in the Cape Fear area. But in the end, there are only two major sources: the Cape Fear River and groundwater aquifers.

Who taps those sources runs the gamut from county and regional utilities to individual towns and cities. Those different delivery systems result in a wide range of prices that consumers pay.

And, getting enough water and keeping it clean will determine where water rates go in the future.

With a massive river and over 50 inches of annual rainfall, few in the Cape Fear region used to worry about the water supply.

That quickly changed at the turn at the start of the 2000s.

A four-year drought ending in 2002, blistered most of North Carolina while dealing a glancing blow to the Wilmington area. Durham was down to its last 38 days of reserve water. Near the headwaters of the Cape Fear River, Raleigh’s supply had dropped by more than half.

Worry evolved into action in 2012. The Lower Cape Fear Water and Sewer Authority (LCFWA) stepped in and opened a new water treatment plant, drawing water from the Cape Fear River. According to Don Betz, LCFWA’s executive director, the groundwater or aquifer has recovered significantly.

The LCFWA is the linchpin for the Wilmington area. On a curve at Kings Bluff near Riegelwood, 24 miles upstream from Wilmington, two raw water intake pipes above Lock and Dam No. 1 inhale about 25 million gallons of water each day.

LCFWA delivers the Cape Fear’s bounty to customers for 27 cents per thousand gallons. The cost has risen almost 30 percent in the past nine years but has leveled off, increasing only 1 cent since 2011.

As a nonprofit, the authority’s price covers its projected annual costs, Betz said.

“We need to cover debt service, $600,000 in electricity for the pumps and plant maintenance. My administrative assistant and I are the only two full-time employees. The plant is highly automated and requires minimal supervision,” he said.

That debt service may rise as LCFWA and other utilities jointly work on the design of a new 14-mile-long, 60-inch pipeline. The project will cost north of $60 million but spread over a large customer base and financed with a 25-year loan, Betz said.

Taking some pressure off the Cape Fear, a number of municipalities have tapped into local aquifers.

In New Hanover County, the Cape Fear Public Utility Authority (CFPUA) pulls an average of 2.4 million gallons per day from 39 wells that tap the Castle Hayne and Peedee aquifers. A Nano Water Treatment Plant uses ozone treatment and state-of-the-art membrane technology to remove organic material. The plant is designed to produce up to 6 million gallons per day.

A few miles from the nano plant, the town of Wrightsville Beach has poked nine wells into the Peedee aquifer. Faced with saltwater intrusion into the aquifer, the town has begun looking at alternatives. Purchasing water, digging deeper wells and using reverse osmosis are on the table. According to Mike Giles, coastal advocate for the N.C. Coastal Federation, “the Wrightsville Beach wells will be exhausted within seven years.”

The town could also purchase water from CFPUA if time or options run out.

New Hanover County’s two other beach towns, Kure Beach and Carolina Beach, also pull groundwater from the Castle Hayne and the Peedee aquifers. The towns have 20 wells and four water towers between them but operate separately.

In Pender County, Surf City’s two wells draw from the most widely used aquifer in eastern North Carolina – the Castle Hayne one. Burgaw retrieves water from 375 feet below in the Black Creek aquifer. Town Manager Chad McEwen said the town will need more water in the future and is working on an interconnect agreement with Pender County.

The Price Of Water

From 2009 to 2011, water prices rose by 44 percent for CFPUA residential customers. The following two years, prices climbed another 17 percent. From then until now, prices have almost flatlined with only a 1 percent increase.

Consumers are also using about 15 percent less water than five years ago.

“Our rate increases were driven by the need to focus on our community’s aging infrastructure,” said CFPUA spokesman Mike McGill. “They are largely reaching the end of their useful lives, and the bill has come due. Replacing a mile of water main costs about $1 million a mile.”

“As a self-sustaining nonprofit that is almost exclusively funded by water/wastewater usage rates, revenues must meet expenditures,” he said. “When water usage drops during a wet spring or summer, utilities like us may need to increase rates to make up for the shortfall in revenue.”

Though a recent state report forecasts that future water availability at Lock and Dam No. 1 should continue to meet the consumption needs of the area by 2060, conservationists remain cautious.

“I would be skeptical,” Giles said. “The United States Geological Service has identified the North Carolina southeast coast as one of four areas in the country with water supply sustainability issues. Our water is not managed and monitored correctly – both surface and groundwater. For example, we’re dredging deeper in the Cape Fear and exposing the aquifer to the river.”

In Brunswick County, plans to tap the lower Peedee and Black Creek aquifers have brought criticism. H2GO (Brunswick Regional Water & Sewer) hopes to start construction of a $29 million reverse osmosis plant later this year. The utility currently buys water from Brunswick County for distribution to its customers in Belville and parts of Leland and Navassa.

The Leland-based public utility promotes the facility as a hedge against future water rate increases.

“With the RO [reverse osmosis] plant, we will stabilize rates and won’t be dependent on the cost of county water,” said Bob Walker, H2GO’s executive director.

The plant, if built, with an initial capacity of 4 million gallons per day, could meet customer needs for the next 40 years with further expansion, Walker said.

“It would make sense to take advantage of the economy of scale that you have with a larger consolidated water provider like the county. The final decision will be up to the area’s citizens,” he said.

Belville Mayor Mike Allen has been a vocal supporter of the plant, especially as a backup in case Cape Fear water access is curtailed. When plans to build the plant in Leland collapsed, Allen was instrumental in moving the plant’s site to Belville.

Betz at LCFWA, however, doesn’t buy the backup argument.

“Brunswick County already has a groundwater plant in Southport with a 6-million-gallon capacity. he said, adding that he also believes the $20 million debt for the plant should be spread over a larger customer base like the county’s 40,000 customers.

Voters will decide the fate of the plant in November when three H2GO board members’ positions are on the ballot.