Mapping Out The Future Of Trade 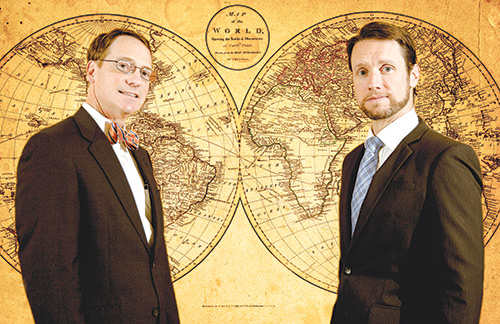 Charles Baldwin IV (left) and Ryan Fairchild, attorneys at the Brooks Pierce firm that works with companies engaged in global trade, discuss potential U.S. policy changes. (Photo by Chris Brehmer)
Even before the election, North Carolina companies doing business overseas were bracing for change. But it was a Dec. 4 tweet from President-elect Trump that really caught their attention.

On the heels of touting his intervention with Carrier to keep additional jobs in Indiana instead of shifting them to Mexico, Trump warned corporations toying with similar notions that he would impose a 35 percent tariff on “any business that leaves our country for another country, fires its employees, [or] builds a new factory or plant in the other country” with the intent of selling its product domestically.

At Wilmington’s DryCorp, whose DryCase operation has used Chinese factories since 2009 to help make waterproof casing for phones, backpacks and coolers, members of the company’s management committee ended up talking about Trump’s statement last month and again considered bringing back production from overseas.

“We’ve probably done this three or four times over the last seven years,” said DryCorp’s Chief Operating Officer Corey Heim, who had first sought out U.S. manufacturing partners but found their costs to be prohibitive. “If something like that [the 35 percent tariff] were to happen today, we would be in trouble and would have to make a change.”

Now, it appears “something like that” will, in fact, happen.

As mounting political opposition whittled back Trump’s tariff to 10 percent, attention also turned to a comprehensive economic plan crafted by Republican members of the U.S. House.

The GOP package includes a “border adjustability” provision under which companies that import foreign-produced goods – whether they have an overseas factory or not – would no longer be able to deduct the cost of those goods. And in a bid to spur more U.S. exports, a tandem provision would eliminate the current tax on companies that sell their goods to foreign customers. 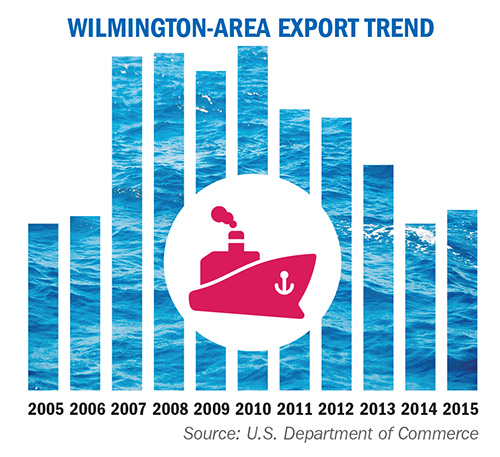 The import-export proposals are part of a jobs-creation blueprint that includes a drop in the top corporate income tax rate from 35 percent to 20 percent and the ability to write off capital investments immediately.

“Everyone is certainly concerned about the offshoring of U.S. jobs, but imposing large tariffs would face significant opposition from many [House] members,” said a statement from U.S. Rep. George Holding (NC-13), a member of the tax-writing Ways and Means Committee. By contrast, border adjustability “would encourage domestic manufacturing and help incentivize the export of American goods,” he said.

Given the increasing prospect of some form of import penalty becoming law, DryCorp and other small manufacturers are hunkering down as they try to gauge the impact of bringing some or all of their production back home.

For companies facing an uncertain period of transition, “Now is a good time to be looking at individual deals and where you are,” Baldwin said.

With multiple revisions to the tax code in play, companies will act methodically before deciding whether to restructure their operations, Baldwin added.

Overall, the tough talk in Washington “increases the incentive for them [importers] to find a domestic supplier for those products,” thinks Adam Jones, an associate professor of economics at the University of North Carolina Wilmington.

At Glide Bikes, a Wilmington manufacturer specializing in balance bikes for children and those with special needs, founder Ed Mondello knew early-on that he would rely on foreign outsourcing. He is not sure that will change.

“It’s just not economically feasible to start a manufacturing plant … the majority of small companies just don’t have those capabilities, they just want to outsource it,” Mondello said. “You want the ability to turn it on and turn it off when you need it.”

“The bicycle field being so China- centric that sourcing parts in the U.S. is not possible,” Mondello said, citing wheels, tires, seats, grips and brakes being manufactured for the industry overseas.

“There’s not a whole lot I can do unless I want to shop it around to do another country,” he added.

Production of bicycle components represents “a significant gap” in domestic manufacturing, concedes Harry Moser, founder of the Chicago-based Reshoring Initiative and a former machine-tool company executive. Here, “the assembly is doing better than the components,” Moser said in a recent telephone interview. But across all manufacturing segments “for the things that are imported, 90 to 95 percent can be made here,” he said.

“The challenge is typically to determine whether, when shifting from offshore to domestic sourcing, twenty to thirty small overhead costs come down more than the manufacturing costs go up,” Moser wrote on his nonprofit’s website. “Based on available data, about 25 percent of offshored products should be profitably reshorable,” he believes.

The Reshoring Initiative offers U.S. companies a variety of resources as they consider bringing business back to the states, including free online software utilizing advanced metrics to analyze the total cost of sourcing.

The key to reshoring is “doing the math correctly,” Moser emphasized, citing a survey which showed that 60 percent of manufacturers use rudimentary cost models and overlook 20 percent of the cost of offshoring when making their calculations.

With concerns about a possible trade war looming, those calculations may also have to take into effect possible market retaliation.

“China is not a shrinking violet,” cautioned Baldwin at Brooks Pierce. “They will act.”

Ryan Fairchild, an associate at the law firm who previously engaged in intellectual property work in China, believes the new administration’s aggressive posture will undercut years of delicate discussions between U.S. and Chinese business partners.

Rather than taking a country-specific approach to trade taxation, Baldwin suggests that the U.S. consider bringing a variety of trading partners together.

“A multilateral approach would be the best way,” he said, adding “America is a trend-setter in these issues and what we do, others are likely to follow.” 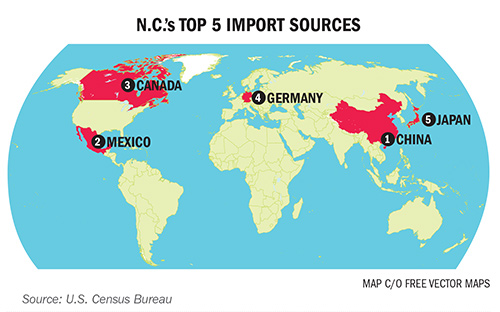 With the prospect of reductions in corporate tax rates at home as well as an import penalty, export benefit and numerous other changes, “I think the biggest cost of all of this is the transition from one system to another,” said economist Jones at UNCW.
“How do you play under a new set of rules?”

Since DryCase uses foreign content in goods that are exported, careful consideration will have to be given to all provisions of the pending tax code.

It is wrong to cite foreign imports as the primary reason for the loss of American jobs, UNCW’s Jones added. He cited millennials’ preference for service-sector employment and the increasing use of robotics. As for manufacturing employment in China, “It’s dropped too” for similar reasons, he said.

For his part, Moser calls job-creation in U.S. manufacturing “a long-term game” and one that should focus heavily on creating renewed interest in trade skills through non-degree certification programs and workforce training.

“We can add machine tools in months,” he said. “Skilled workforce takes time.”

In the meantime, small manufacturers like DryCorp and Glide Bikes continue to look for domestic shops that can offer the right services at the right price, with Heim hoping to find grants or incentives to help seal some deals.

“I’ve put more effort into this thing in the past few weeks than I have in years,” he said.

Without foreign sourcing, DryCorp would never have been able to launch its DryCase operation and increase the combined employment at its headquarters from two to 20, the COO said.

In the face of a significant penalty for doing business with China, “What are we getting on the other end to help bring some of our manufacturing back here?” Heim asks.