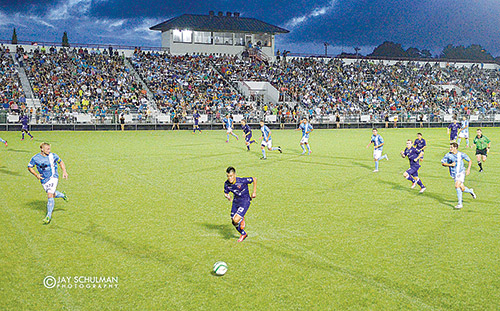 The Hammerheads pro soccer team played at Legion Stadium before its move (Photo courtesy of Wilmington Hammerheads)
Twenty years of professional soccer came to an end in Wilmington in September, when the Hammerheads went out in style with a win over the Richmond Kickers at Legion Field.

The United Soccer League (USL) team, which had an average attendance of 2,971 at 6,000-capacity Legion Stadium this season, was moved by the league to Baltimore, where it will begin play in the 2018 season.

The team has never been flush with revenue, as it operated in the smallest of the 29 USL markets and had always struggled with drawing a crowd.

“The Hammerheads have been a great corporate citizen, and we are very disappointed with the decision,” Wilmington Downtown Inc. president and CEO Ed Wolverton said when news of the team’s departure was announced in September.

The Hammerheads had been in Wilmington for 20 years, founded in 1996. The team won a league championship in 2003 and had been an affiliate of the New York City Football Club, a Major League Soccer (MLS) team. It’s currently owned by George Altirs of New Jersey, who bought the club in 2013. Altirs is the founder and owner of the clothing company Capelli New York.

But all is not lost for soccer fans here in the Port City.

The Hammerheads will live on, with a team in the Premier Development League (PDL), a summer league that was formed to accommodate top, college-aged talent during the summer months when school is out. It’s designed for players who need to continue playing high-level competitive games as they develop and prepare for their college seasons.

The league has 65 teams competing in four conferences, split into 10 regional divisions.

“This is a great market for a PDL team,” said Carson Porter, executive director of Wilmington Hammerheads Youth. “This part of the country has a lot of great young players, just look at the NCAA Final Four in soccer, which includes UNC and Wake Forest.”

Porter said play will begin in late May and run through the end of July. While not confirmed yet, he said he believes the home games will be played at Legion Stadium.

The youth program will see almost no impact from the departure of the USL franchise, officials said.