Beau's Coffee Named Coastal Entrepreneur Of The Year For 2016 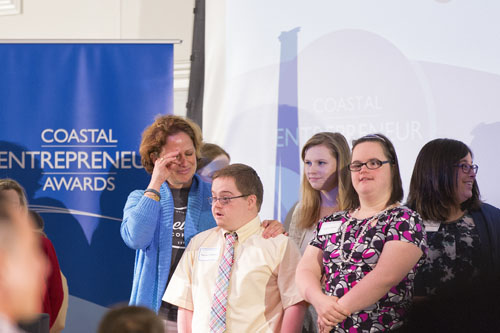 Beau's Coffee co-founder Amy Wright reacts Tuesday, standing with some shop employees, after Beau's was named Coastal Entrepreneur of the Year at UNCW's Burney Center. (Photo by Chris Brehmer)
The founders and employees of Beau’s Coffee embraced in a group hug Tuesday morning at the University of North Carolina Wilmington during this year’s Coastal Entrepreneur Awards.

They had just found out that their business, a coffee shop that employs people with intellectual and developmental disabilities, had been named Coastal Entrepreneur of the Year.

In January, Beau’s Coffee opened at 4414 Wrightsville Ave. in Wilmington, and since then, the shop has gained a local following and national attention that includes being featured on The Rachael Ray Show.

Employing 19 people with IDDs, the first location of Beau's is on track to generate $500,000 in sales this year, said Amy Wright, who founded Beau’s Coffee with her husband, Ben. And the shop's success story has also generated interest from potential franchisees across the country.

“In a short time, this year’s winner has shown that when you have clarity of vision and purity of purpose, the community responds and people line up literally around the block to access your product,” said Brendan Collins, CEO of last year’s Coastal Entrepreneur of the Year winner Mimijumi, as he announced Beau’s as this year's recipient in UNCW's Burney Center.

Beau’s Coffee was also this year’s CEA retail category winner. The Coastal Entrepreneur Awards are a joint program by the Greater Wilmington Business Journal and University of North Carolina Wilmington's Center for Innovation and Entrepreneurship.

The Wrights viewed opening Beau’s Coffee as a means of employing people with IDD but also changing perceptions about their employment possibilities and role in society. The two youngest of the Wrights’ four children – the shop’s namesake Beau, 11, and Bitty, 6 – have Down syndrome.

A third of Beau's Coffee's profits have come from merchandise sold at the shop, including T-shirts, hats and coffee mugs, the Wrights said.

"People come in for the coffee and stuff, but they really come in to experience it, and then I think their way of showing their support is buying the merchandise and wearing it or using it," Ben Wright said.

CEA presenter Judy Girard, former president of the Food Network/HGTV and co-founder of the Girls Leadership Academy of Wilmington, said the coffee shop's statistics impressed the judges of this year's CEA nominee pool, which consisted of about 100 companies and organizations.

"A worker in an average coffee business generates about $50,000 in revenue; at Beau’s, they’re pacing at $100,000 a year in revenue. The average Starbucks customer spends $4 a visit; the average Beau’s customer is spending $11 a visit," Girard told the audience of about 350 at the CEA ceremony Tuesday.

A large group of Beau's employees joined Amy and Ben Wright on the stage to accept their awards in the retail category and for Coastal Entrepreneur of the Year, receiving two standing ovations during Tuesday's event.

“I’m just blown away, absolutely blown away,” Amy Wright said of the overall award Tuesday after the Beau's Coffee group hug on the Burney Center's stage.

As the Wrights work on efforts to put Beau's Coffee franchises in other parts of the country, the shop is already growing its Wilmington presence with the donation by the Rippy family of a 5,000-square-foot facility, a former Hummer dealership, at 4949 New Centre Drive, the Wrights said Tuesday. The facility will serve as a national and world headquarters for Beau's, with a coffee shop, training center for franchisees and employees, a conference room and more, Ben Wright said.

He said Beau's is expected to move into the new facility in July, but the Wrights have not yet made any decisions about the current Wrightsville Avenue location.

Like Beau's, many current and past winners of CEAs continue to report that they are reaching milestones.

“I couldn’t be more excited to tell you about the record growth that we’ve had over the past year . . . we have hundreds of thousands of Mimijumi moms around the world using our products and it’s so rewarding for us and the team to see the impact that we’re having literally on family’s lives around the world," Collins said during the awards Tuesday.