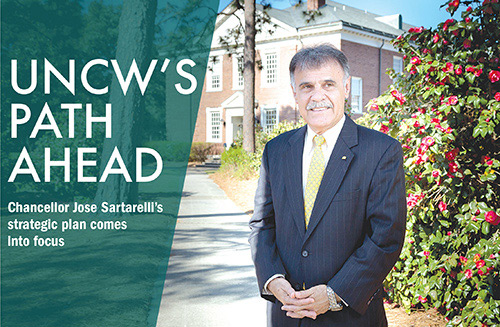 When he started as chancellor last year, Jose Sartarelli said the campus-wide development of a strategic plan for UNCW was a key goal. (Photo by Mark Steelman)

When he is formally installed as chancellor of University of North Carolina Wilmington on March 31, Jose Sartarelli can point to a major effort already accomplished under his leadership: creation of a strategic plan that reflects his priorities and incorporates the thoughts of a broad swath of UNCW constituents.

From the time he assumed his position as head of the school July 1, Sartarelli has said that a strategic plan was at the top of his priority list.

He also listed five strategic priorities he wanted the plan to focus on.

According to a presentation Sartarelli gave to trustees last summer, they were:

In the months since, UNCW has been engaged in an effort to put that plan together.

While it is now ready for its debut, it is subject to ongoing revision. To ensure that the plan is a living document and not a document that sits on the shelf, it will be reviewed every six months, the chancellor said. It will form the basis for a master plan for campus facilities and related resources.

Sartarelli plans to mention the effort in his installation address March 31and point forward to the next step: development of an implementation plan. That process will start in April, he said last week.

Like the strategic plan, the implementation plan will contain goals, metrics, a timeline and funding sources, according to Sartarelli, who added that it would also specify who has responsibility for what aspects of the plan.

Strategic planning has been at the forefront of Sartarelli’s thinking since before he arrived on campus last summer. Even at his first remarks on campus after being named chancellor last April, he articulated a short list of goals, the bones of his vision for the university.

Embedded in the major goals are shorter-term objectives, which include a concerted effort to make the campus more global and diverse in vision and student body makeup, to enhance recruitment of what Sartarelli terms “the best” freshmen and transfer students, to bolster online and distance education offerings and to add graduate degree programs that align with UNCW’s mission and strengths and for which there is a need in the market, the chancellor has said.

To flesh out the bones he has articulated, the chancellor initiated the strategic planning process soon after coming to campus. He stated at the outset he would involve as many constituent elements as possible.

“There was a leadership council here, and he expanded it [for the planning effort] to include faculty across campus and all four schools,” said Cameron School of Business dean Rob Burrus. “I thought it was a really good and inclusive process.”

While about 50 percent of the planning group consisted of faculty representatives, Sartarelli named staff and student representatives as well, and then divided the whole group into seven teams, one for each of the five goals, one to do a SWOT analysis and one to craft statements of vision, mission and values. Last summer, the new chancellor said he wanted a draft document by the end of the calendar year. The timing wasn’t far off.

“The teams completed most of their work by January,” Sartarelli said. “In January, we put together an integrative team of 13 people. They completed their work in early February. During February and March there were fora at which the team presented.”

The integrative team heard – and in some cases incorporated – suggestions made at the forums. The chancellor himself presented the plan to the Faculty Senate, and said he got a thumbs-up.

In recent months, Sartarelli has made several hires in positions that align with his strategic goals.

He convinced Marilyn Sheerer, appointed interim provost by interim chancellor William Sederburg, to become permanent vice chancellor and provost. As the university’s chief academic officer, Sheerer oversees what is taught and how it is taught. She works closely with the faculty and is responsible for anything that concerns students and the quality of their experience at UNCW.

A focus on making UNCW more global and diverse in its makeup and mindset is reflected in the upgrading of a position overseeing international programs. The new position, that of associate vice chancellor, replaces one at a lower level. Michael Wilhelm was hired late last year to fill the upgraded post.

Sartarelli has also said he wants the university to do a better job of attracting military veterans, and has made an appointment to support efforts in that direction. Earlier this month he named Bill Kawczynski director of the newly created Office of Military Affairs. Kawczynski, a Marine Corps veteran, had been the university’s community partnerships program specialist.

Similarly, to emphasize UNCW’s commitment to expanding online and distance-learning offerings, Sartarelli created a new position of associate vice chancellor for distance education. Ronald Costello was chosen for the job.

Sartarelli understands public concerns about universities’ spending on administration and said these new hires and appointments have not added to UNCW’s administrative headcount.

“I have been filling all vacant positions or positions with an interim in place and have done some rearranging of responsibilities. I also upgraded a couple of functions,” he said, referring to the associate vice chancellor of international programs and the military affairs position.

“My cabinet is full now.”

The chancellor and his administrative team are committed to building on UNCW’s existing strengths, Sheerer said, acknowledging that charting new directions can be scary, but stating her confidence that Sartarelli will “protect what is here.”

“Distance education will mostly be around graduate programs: finance, business analysis, data science,” she said. “They represent needs he hears about when he goes to nCino, Corning. The liberal arts will always remain, especially during [an undergraduate’s] first couple of years, before they move on to their majors.

“What I think [the chancellor] does tremendously well is that he knows the marketplace,” she continued, adding that while sometimes the faculty can bridle at a perceived business focus at the top, an understanding of market demands is valuable.

The new chancellor does bring a business perspective to his role.

The Brazil native had a 30-year career in the global pharmaceutical industry before leaving the private sector in 2010 to become dean of the College of Business & Economics at West Virginia University. He was made that university’s chief global officer in 2013.

New degree programs at the graduate level will address market demands not only of employers but of students. The demand is there for online curricula, and Sheerer feels that UNCW needs to step up its game.

“My daughter, who lives in Wilmington and works at PPD, is enrolled in an online MBA program from another institution, only because UNCW does not offer one,” she said.

Sartarelli sees new programs, like the recently approved doctoral programs in psychology and nursing practice–and “at least” 12 new master’s degree programs on the drawing board – as one way of increasing the number of students at UNCW.

He references the need to attract more international students and more veterans, and the need to retain students once they are enrolled. He wants more money for financial aid.

But none of his proposed plans for expansion, he says, should be achieved to the detriment of quality.

“Our current SAT average is 1191; my goal is 1230-1250. [We will be] raising the bar and raising the bar on retention, both retention after the first year and graduation rate at six years,” he said.

Given that many elements of the university’s new road map are long range, what are the immediate priorities the chancellor sees illuminated in the headlights?

“There are three themes we’re talking a lot about,” he said last week. “One is excellence in everything we do: services, teaching, research. Second is how we develop a global focus and mindset that is reflected in the curriculum and activities. The third is engagement: how we make sure our feet are on the ground and we remain very engaged in the community, the state and the world.

Engagement beyond the campus, Sartarelli said, “is our raison d’être.”