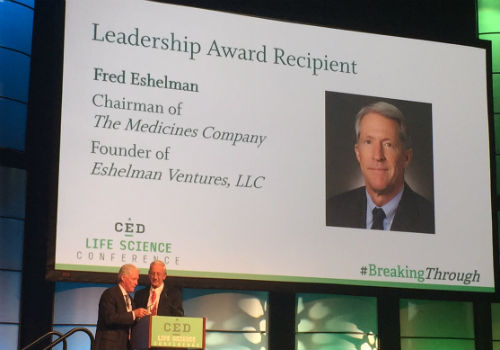 As it wrapped up, the CED conference featured a presentation of a Life Science Leadership award to Fred Eshelman. (Photo courtesy of Jim Roberts)
Wilmington-based medical device startup Surgilum got in front of hundreds of scientists, entrepreneurs and other business leaders earlier this week as a Showcase company at the 25th annual CED Life Science Conference in Raleigh.

Surgilum, the only Wilmington entity among the Showcase companies, was one of 14 ventures chosen by the Council for Entrepreneurial Development (CED). Founder Alan Brown, a surgeon who has developed the Robomarker used in eye surgery.

During his time in the spotlight, Brown spoke primarily about a new photon speculum Surgilum plans to launch in May, according to his wife, Debbie. She explained that the illuminated device gives a surgeon a better view of the eye.

“The Robomarker is used mainly for cataract surgery, but this [speculum] will include other surgical sub-specialties like glaucoma and corneal surgery,” Debbie Brown said Thursday. “It allows the patient to get a better outcome and makes the surgeon more proficient and efficient.”

The speculum will also broaden Surgilum’s market, she said.

The Browns were able to talk with many other conference attendees in the event’s Innovation Room, where Surgilum had a table.

“We met several VCs who like to look early,” Debbie Brown said. “We don’t have need of [venture capital] quite yet, but we’re always interested in developing a network. Right now, our strategy going forward is we are very open to acquisition of our initial product to help fund a pipeline for future products. We have quite a few products in the works, and we’re looking for the right opportunities for strategic alliances with companies that can help us.”

Debbie Brown said Surgilum, early on, had found a “fantastic” resource Jim Roberts, then-director of the Center for Innovation and Entrepreneurship in Wilmington, who more recently founded the Network for Entrepreneurs in Wilmington (NEW) and Wilmington Angels for Local Entrepreneurs (WALE). “Jim has been great at connecting us with really great people,” she said.

The conference experience was an “absolutely” successful one for Surgilum, Debbie Brown said. Not only did she learn about some areas in which she needs to “do some homework” in helping develop the company, but she and her husband connected with people at N.C. State University who are helping the venture identify potential interns.

The two-day conference, which featured talks by more than a dozen global thought

leaders and drew about 1,000 attendees, concluded Wednesday with the presentation to Fred Eshelman of the Life Science Leadership Award. Eshelman (at left in photo), who maintains offices in Wilmington, is the founder of PPD, Furiex, and more recently, Eshelman Ventures.

“As founder, CEO and Executive Chairman of PPD as well as founding Chairman of Furiex Pharmaceuticals, Fred Eshelman has played a pivotal role in the development of the North Carolina life science community,” CED officials said in a January announcement of the upcoming award.

In his acceptance remarks, Eshelman spoke about entrepreneurship, culture within organizations, and the importance of higher education as a magnet for talent, contributing to the growth of the state's companies, according to CED spokeswoman Emily McLoughlin.