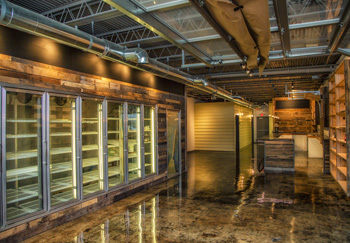 Palate, a retail shop that will sell craft beer and feature a beer growler filling station, is being prepped to open soon on North Fourth St. Owners are hoping to capitalize on the recent uptick in local brewery activity. (Photo by Chris Brehmer)
With a number of breweries popping up in and around the Port City, it’s no secret that beer is big business. But what you may not know is that area entrepreneurs are starting to cash in on the local brewery boom in more ways than one, without brewing a thing.

Among them is the duo behind the new Port City Brew Bus, which offers an interactive tour of local breweries. Owners Mark Mueller and Jeremy Tomlinson saw the success of similar tours offered in brewery-rich cities, such as Asheville, and decided to start one in Wilmington.

Already small business owners, it was their entrepreneurial drive and passion for craft beer that made the business idea viable. As advocates and promoters of such, the decision to showcase the local craft beer community, for them, was an easy one.

“We really wanted to get people to understand that we have really creative people here and you can get some world-class beer in Wilmington,” Tomlinson said. “And this is different than just going to the downtown bar scene. You see and learn how the beer is made.”

According to the bus tour’s website (www.portcitybrewbus.com), the beer industry contributed $2.9 billion to the state’s economy in 2012, plus nearly 38,000 jobs. For Mueller and Tomlinson, launching Port City Brew Bus lets them grab a piece of the pie in – and help further – the growing industry they enjoy and admire.

The bus tours, which kicked off on Black Friday, allow patrons to not only sample the styles of beer created at the local brewpubs but also meet the people who make them. What’s more, Tomlinson explained that tour goers can glean insight into each brewery’s unique fermenting process.

Located in the Brooklyn Arts District at 1007 N. Fourth St., the owners of Palate say the surge in Wilmington – and statewide – micro-breweries shows that a strong and abundant customer base is there and ripe for the picking.

“We are very excited at the new microbreweries and nanobreweries opening in town and even right down the street from us, like Flytrap [Brewing], because it shows that Wilmington has an audience for what we are doing and people are passionate about the craft,” Palate co-owner Josh Wittman said. “I’ve heard several sound bites that say that North Carolina has the ninth-most breweries of the 50 states, and that shows there’s support for it from consumers and the legislation.”

While the retail shop will feature craft beer and wine, with “a great selection of local liquid,” Wittman said, it’s those growlers that tie Palate into the secondary boon from the local brewpubs.

For local breweries that don’t have their beers available by the bottle, growlers can be filled with those drafts, hence making them available “to go.” Therefore, shops like Palate, can profit by selling the local brews, themselves.

Wittman, a Raleigh-based entrepreneur, likens the concept behind Palate to the small, independent record stores, where a more personal relationship is established with customers and recommendations can be made according to one’s taste. It’s that back-to-basics philosophy that’s also spurred Wittman and his business partners – wife Fran and Wimington’s Kevin Rhodes – to get in on the local beer action.

Another business making bank on the breweries’ coattails is The Veggie Wagon. While the Carolina Beach store specializes in selling fresh, local fruits, veggies and homemade goods, it also functions as a growler filling station, with craft beers from around the state.

But it’s their distinctive Brewnola Bars that seem to set them apart. Made from the spent grains after the brewing process at Carolina Beach-based Good Hops Brewing, the bars are not only nutritious, they also reduce waste, The Veggie Wagon co-owner April Sussman explained.

“There’s a lot of waste from grains used to make beer, so we decided it was time to make a bar from our local breweries,” Sussman said. “It’s something fun and different that we’re able to offer.”

What’s more, the store’s reuse of the spent grains doesn’t end there. The business recently released a “grab and go pizza dough” also made from the grains used at Good Hops Brewing, Sussman said.

The Veggie Wagon also sells its homemade food products in some of the local breweries, further increasing the Veggie Wagon’s retail sales. According to Sussman, they’ve installed refrigerated cases inside Flytrap Brewing and Good Hops Brewing stocked with snacks, including cheeses and dips, that are available for brewery customers to purchase.

“One of the problems when you go to breweries is that there’s no food,” Sussman said. “So we’re providing options that are more healthy, for example, with no preservatives.”

The “no-food problem” that Sussman sees is also being solved by local food trucks. The mobile restaurants can be seen parked outside of the area brew houses, and are often included on the flyers from some brewery-related events.

Ogden retail beer and wine shop Fermental has gone one step further, bringing both the breweries and food trucks to them. Among Fermental’s repertoire is holding weekly events that often highlight local and state breweries and their beers.
Recently, the shop at 7250 Market St. teamed-up with Wilmington’s Broomtail Craft Brewery for an event, with Broomtail’s crafting crew and brews on site at Fermental. Patrons could sample and then buy the Wilmington brewery’s beers that were on tap at the fete.

Local restaurant Catch’s food truck participated in the Fermental affair, offering eats available for purchase. Other food trucks that have caught the brewery business
bug include Vittles, which has sold its food wares at Flytrap Brewing, according to the brewery’s Facebook page.

More breweries are slated to open in Wilmington, including Ironclad Brewery, in 2015. With that, the number of businesses harnessing the resulting potential profit power will likely continue to grow.