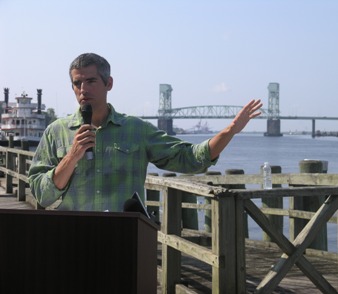 Kemp Burdette of Cape Fear River Watch speaks at Thursday's economic development news conference (Photo by Cece Nunn)
In anticipation of an effort by Wilmington and New Hanover County to move ahead on economic development recommendations from the "Pathways to Prosperity" Garner Report, the N.C. Coastal Federation wants to develop a model for that development process.

That was the message at a news conference held Thursday in downtown Wilmington’s Riverfront Park.

With a $25,000 grant from a private foundation, the NCCF is funding a collaborative process, Mike Giles, the NCCF’s coastal advocate, said at the event.

During the next few months, a planning and zoning consultant will help lead an effort to establish a model industrial development process for communities in New Hanover County and the region, environmental, business and community leaders announced at a news conference.

“Our environment is critically important to a vibrant economy and the ability to recruit and retain industries that we all desire,” Giles said as he introduced the initiative. “It is one of the most important attributes that we can use to shape our economic future.”

Three primary objectives for the consultant, according to an FAQ from the NCCF, will be: Next week, Giles said, City of Wilmington and New Hanover County officials will meet to discuss the results of a report by Garner Economics titled “Pathways to Prosperity,” commissioned by both entities last year, that was tasked with identifying a vision for industrial recruitment.

The initiative announced Thursday is aimed at kick-starting that economic vision, Coastal Federation and other speakers said at the news conference, which was sponsored by the federation, Cape Fear River Watch and the Cape Fear Economic Development Council.

“We need all people of goodwill, whether they be in the industrial sector or they be environmentalists, to come and sit around the table together and come up with rules, regulations, decisions that will balance both the industrial needs and our need to protect our quality of life,” said city councilman Kevin O’Grady.

Another speaker was Rob Zapple, a licensed general contractor and candidate for a seat on the New Hanover County Board of Commissioners. He said of the initiative, “We can move forward together to achieve our common goals.”