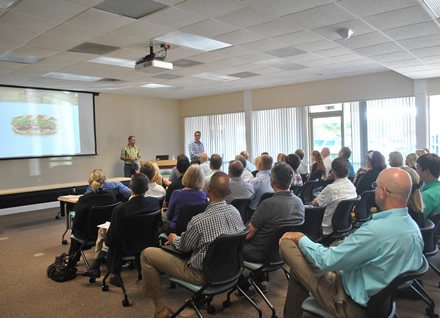 Area business people attend a seminar at UNCW's CIE, which plans to apply for a $50,000 prize from the U.S. SBA. (Contributed Photo)
In an effort to stimulate entrepreneurial activity across the country, the U.S. Small Business Administration is sponsoring a $2.5 million competition for business accelerators and incubators. At least one area entity is planning to participate.

The competition invites applications from accelerators and “other entrepreneurial ecosystem models” outside of the well established cradles of business startups to compete for prizes of $50,000 each. Jim Roberts, executive director of the University of North Carolina Wilmington’s Center for Innovation and Entrepreneurship, said in an email that the CIE does plan to apply.

“We are eager to compete with other regions outside of Silicon Valley,” Roberts said in an email. “We think we have had early success with supporting entrepreneurship in the Wilmington region even though our center is not even one year old.”

“Through this competition, we are looking to support the development of accelerators and thus startups in parts of the country where there are fewer conventional sources of access to capital (i.e., venture capital and other investors),” a news release from the SBA stated. “For the purposes of this competition, growth accelerators include accelerators, incubators, co-working startup communities, shared tinker-spaces or other models to accomplish similar goals.”

The SBA is also seeking out accelerators that are run by and support women or other underrepresented groups, the release stated. Special consideration will be given to any accelerator models that support manufacturing.

Applications will be evaluated by a panel of experts who will consider each applicant’s stated mission, founding team members and business goals among other core components, the release stated, adding that “the panel will give particular attention to, and the SBA encourages, applicants that fill geographic gaps in the accelerator and entrepreneurial ecosystem space.”

Asked whether southeastern North Carolina might be such a “geographic gap,” Kim Peyser, special advisor to the SBA’s Office of Investment and Innovation, said in an email, “Building the accelerator network in an area like Wilmington is exactly the kind of area we’re interested in supporting.”

Despite a statement in the release that “the most successful accelerators to date were founded on the coasts,” Peyser said that the SBA was, for the most part, referring to coastal locations like New York City, Boston, Washington, D.C., and San Francisco.

“Applications from North Carolina would be most welcome,” she said.

As evidence of the CIE’s potential to spur and nurture new ventures, Roberts cited Next Glass, HUGO Network, WolfPack, GO2 and “our other tenants “ as “companies that would compete in any city, as proven by the companies presenting at the N.C. Technology Association Startup Showcase this week.”

Two out of the eight companies competing in the NCTA’s tech startup competition are CIE tenants, and a third is UNCW graduate Justin Beard, Roberts noted, adding “only the Raleigh/Durham area has more companies that were chosen.”

Over the coming months, SBA will be working with a number of partners such as the Global Accelerator Network and others to host a number of Demo Days across the country, according to the release, which explained that Demo Days provide opportunities for networking and the sharing of best practices among accelerators and other entrepreneurial ecosystem models.

Peyser said that, while there is no Demo Day scheduled at present in North Carolina, the SBA does want to hold one somewhere in the Southeast U.S.

The deadline for accelerators, incubators and shared-workspace entities to apply for the SBA competition is Aug. 2.