MegaCorp On The Move Toward Growth 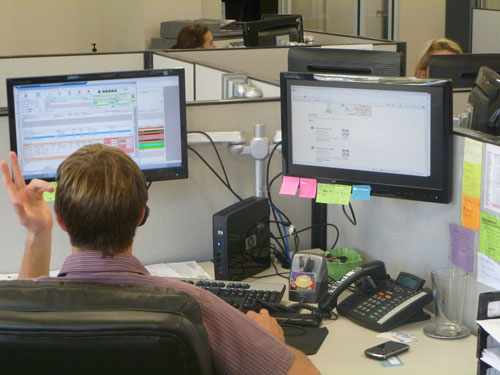 A broker with Wilmington-based MegaCorp Logistics on the phone with a customer while viewing shipping data on his computer screens. (Photo by Jenny Callison)

Denise and Ryan Legg are back in the saddle again. After a couple of decades in the logistics business in the Midwest, the husband-and-wife team is driving the success of Wilmington-based MegaCorp Logistics.

The Leggs launched their venture in early 2009, forging relationships with owner-operators, as well as larger trucking companies.

Less than three years later, they are logging sales of about $50 million per year and have increased their staff to 80 people, roughly half in the Wilmington office, and the other half distributed among MegaCorp’s offices in Cincinnati, Chicago and Elkins, W.Va.

A database allows MegaCorp to shop for cargo space among 9,100 trucking companies in the country. Ryan Legg said the company can help manage freight for anyone, and the numbers bear him out: in a typical month, it handles between 2,500 and 3,000 loads. Shipping Chobani Yogurt from New York to this area accounts for 30 loads every week, alone.

Chobani is typical of MegaCorp’s area of specialization, which is refrigerated goods. Fully 75 percent of the truck space it uses is refrigerated, enabling the company to transport poultry, produce, and dairy products throughout the eastern United States and beyond. However, the company also handles dry goods for a variety of customers, from textile companies to General Cable in the Cincinnati area.

Although MegaCorp is primarily a third-party logistics company, it is developing its own fleet of refrigerated trucks. Like all aspects of the company, however, this growth is gradual and calibrated to reflect demand.

MegaCorp’s goals, values, and operating philosophy are the result of the owners’ experience with other companies. Ryan Legg began his career working for the Castellini Group of Companies in Cincinnati, one of the nation’s largest distributors of fresh produce. In 1997, he and a colleague founded their own company, Total Quality Logistics (TQL), also in Cincinnati. Denise Legg served on the board.

TQL quickly became a leader in its industry, thanks to its central location within easy drive of major markets, and ready supply of marketing and supply chain management graduates from surrounding universities. But by 2006, Ryan Legg was ready to go his own way, and sold his half of the company to his partner.

During a subsequent three-year non-compete period, the Leggs had time to reflect on their personal and professional lives. After having the first of their two children, they wanted a better work/life balance and bluer skies. So they pulled up stakes in Cincinnati and moved to Wilmington, near Denise’s hometown of Wallace.

In early 2009, the non-compete agreement expired, and the Leggs were ready. They cranked up their new enterprise, qualifying as a woman-owned company with Denise in the driver’s seat as 51 percent owner and CEO. Ryan became president.

Three strategies lie at the heart of MegaCorp’s success, according to Ryan Legg.

“First, we are well diversified. Last week, we served 100 different customers in several industries,” he said. “Second, we build relationships with trucking companies, with our customers, and with our employees. And third, we invest in our employees and take the time to train them so they can be effective in visiting customers and cold calling. I like seeing an employee, with no experience in this business, land and manage accounts.”

The Leggs have also found ways of adding value to their services. As an example, their carriers get paid quickly, regardless of whether the company has received payment from the customer. IT expertise enables MegaCorp to find inexpensive “back haul” routes for its customers, since carriers will offer bargain rates rather than send a truck home empty.

On October 24, MegaCorp moved to larger quarters in the former Flagship Building, at 7040 Wrightsville Ave. A complete renovation created an open-plan work area on the first floor that is bordered by glass-walled offices for company officials.

The Leggs’ work spaces may be separated from those of their employees, but they are only a few steps away from the desks where brokers and sales staff are busy on the phone with customers.

“I know everybody; I know their wives and husbands and kids,” Ryan Legg said. “And my door is always open.”