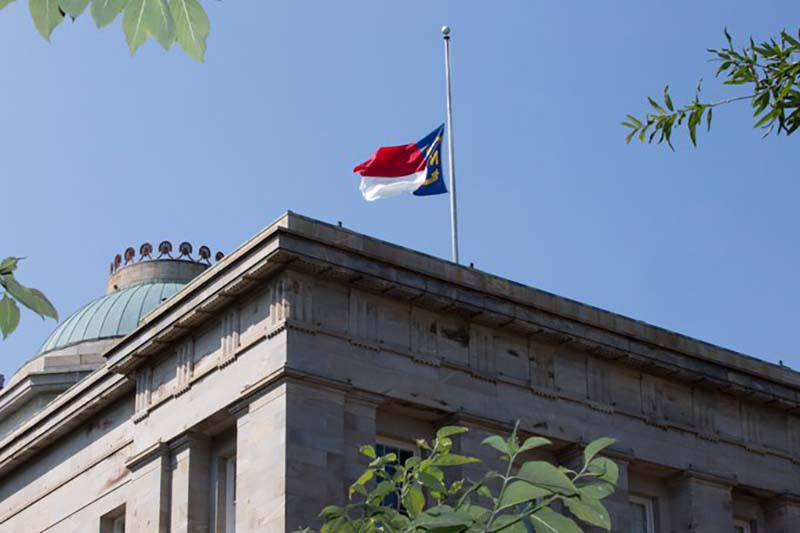 North Carolina was named the No. 1 place to do business in the country in a recent CNBC study. (Photo courtesy of N.C. Gov. Roy Cooper's office)

From the Crystal Pier in Wrightsville Beach on Wednesday morning, Gov. Roy Cooper helped announce the state’s fresh ranking as the No. 1 place for business in the U.S.

Ranked by CNBC, North Carolina rose to the top of the annual list for the first time, after reaching second place last year and almost always reaching the top 10 since the study’s start in 2007.

This particular ranking was timely considering Cooper just Tuesday signed the state budget into law – the first on-time budget signed in several years after the governor vetoed budget bills between 2017 and 2019.

Deadlocks between the Democratic governor and Republican-led legislature have led to stalled progress in recent years, but with the passage of a two-year budget in November and this week’s update to the second year of that plan, a spirit of bipartisanship appears to be moving action forward. Cooper told CNBC his veto power amongst the Republican-led legislature (which does not have a veto-proof majority) has helped balance the equation.

“We disagree about plenty,” Cooper said in the interview. “My vetoes have been able to stop a lot of bad legislation that’s come forth, particularly in the culture wars. We’ve been able to keep that at bay."

In a press release, N.C. Commerce Secretary Machelle Baker Sanders highlighted the more than 24,000 new jobs and investments announced last year, totaling $10.1 billion in investments. Top among the new job creators include Vinfast, Apple, Toyota and more. “There are many factors for our success, including our central East Coast location, premier quality of life and low cost of business, but our greatest asset is our diverse and highly-skilled workforce that is supported by our top-rated education system,” Sanders said.

State Treasurer Dale Folwell cited Wednesday morning’s news out of the U.S. Bureau of Labor Statistics that showed inflation reached 9.1% in June –– the largest 12-month increase since 1981. With inflation, “consumers and families are facing their biggest struggle in modern times,” Folwell said in a press release. “North Carolina is not immune to those pressures, but due to the foresight and policies put in place the past decade to create the state’s super-economy, the damage is somewhat blunted compared to other states.”

Folwell credited taxpayers, the discipline of current and past General Assemblies, surpluses and rainy day funds with bringing businesses certainty when deciding whether to expand or relocate in the state.

Fintech company nCino, which has 830 employees in Wilmington, lauded the city as helping the company grow from its small crew of five in 2011. "The company strongly believes that their location in Wilmington is one of the main reasons they have been able attract and retain top talent in the industry," an nCino spokesperson wrote in an email.

Wednesday's announcement is yet another attention-grabbing headline that benefits the area and state. In April, the state ranked No. 2 for economic outlook in the annual 2022 Rich States, Poor States report conducted by the American Legislative Exchange Council, up from the No. 5 spot in 2021 and 2020. Travel + Leisure put Wrightsville Beach on its list of the top 25 beaches in the nation. Last week, Yelp named Wilmington in its top 10 destination small foodie cities. The city was also ranked the seventh most moved-in city in a recent HireAHelper migration study of moving data.

“When government compromises with each other, things get done. It’s pro-business. Businesses don’t like crazy,” Kinney said.

Wilmington Chamber of Commerce CEO Natalie English cited the reason for Texas’ drop in rankings on the CNBC list from 4th to 5th was a poor climate for social issues. “We’ve got to pay attention to what our policymakers are talking about,” she said, emphasizing their focus should be on business retention and recruitment.

Social issues were a damper on North Carolina’s overall score in the study, which was 1,580 out of 2,500 possible points. N.C. ranked 28th for life, health and inclusion, caused in part by its status as one of five states nationwide that lack anti-discrimination laws for disabled residents. Per capita public health spending and hospital resources also caused this metric to lull for N.C., signs of the state’s dramatic growth hindering available resources, according to CNBC.

North Carolina also ranked second in the study for access to capital, behind only California. A heavy bank presence in Charlotte offers a “home field advantage,” according to CNBC, and companies have lured about $3.5 billion in venture capital funds last year, ranking sixth in the nation.

In November, the budget passed a phase-out of the corporate income tax by 2030. The state ranked fifth for technology and innovation, supported by the strength of the Research Triangle Park, and 12th in workforce.  Kinney said the ability of the community college system to “turn on a dime” to craft programs to cater to specific companies looking to locate or expand in N.C. is a major driving force. “They are willing to do business and do whatever it takes,” he said. “That’s a key thing.” ​