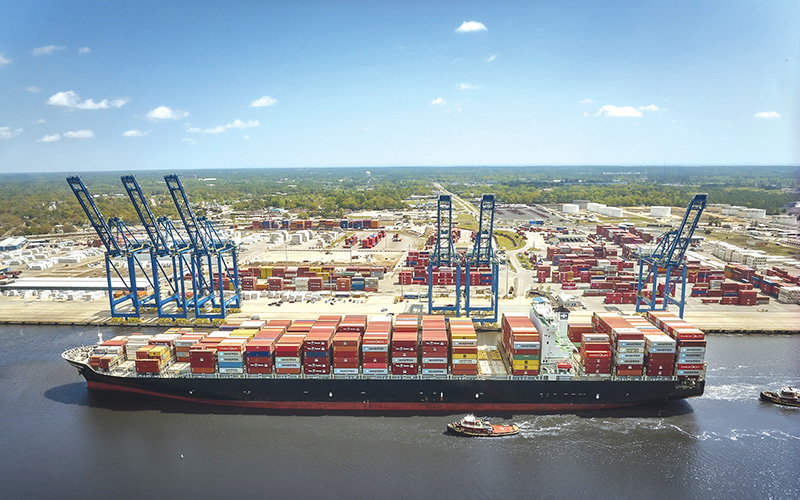 As consumer spending remains persistent in the face of rising interest rates and pessimistic economic forecasts, a consistent stream of goods has continued to flow through the Port of Wilmington.

“We haven’t seen the impact on our volumes,” said Brian Clark, executive director of the N.C. State Ports Authority. “We are certainly seeing the inflationary impacts on our day-to-day operations, whether it’s fuel or consumables or any other spend that we have.”

The Wilmington port is ranked 21st in the U.S. for container traffic, according to the Bureau of Transportation Statistics’ port performance report released earlier this year and based on 2020 data. Nationwide, containerized cargo is the most common method for vessel-based trade and is utilized for most imported consumer goods, the report states.

But logjams in busy ports and supply chain issues have driven ocean carriers to seek other means to move their volumes in Wilmington. This has driven up the port’s general cargo traffic, which represents noncontainerized goods.

“We saw a shifting of cargo, in some respects, from typical container trade to general cargo movement, just based on available capacity over the last year,” Clark said.

The constraints led to ad-hoc use by different services of the Wilmington and Morehead City ports, which are equipped to handle general cargo.

“Carriers and cargo interests are looking for alternatives. They’ll continue to look for alternatives as the supply chain continues to have its challenges,” Clark said. “Our goal is to grow these into regular services.”

About 2.8 million tons of general cargo moved through the Port of Wilmington in fiscal year 2022, which ended in June, a record high and 27% year-over-year increase. Meanwhile, container moves at both ports were about 9% lower.

The key drivers of the general cargo boost through the Port of Wilmington have been woodchips, forest products and pulp, according to fiscal year-end presentation materials.

Overall, the ports authority saw record revenue of $68 million in FY22. “That’s just the nature of growing the business and growing the services that we offer,” Clark said.

“We have some cargo interests that are giving us trial moves to make sure that it supports their supply chain needs,” Clark said. “These are volumes that would have moved through other ports because we did not have that service into the Midwest markets.”

The new midwestern service complements the port’s Queen City Express, which started in 2017.

In FY22, the Wilmington port saw record rail lifts utilizing the two intermodal services, up roughly 13% with about 8,800 moves (when a container is loaded or unloaded to a rail cart). Year-to-date, the port is exceeding last year’s intermodal performance, a trend Clark said he expects to continue.

As the cost of fuel and trucking has risen, there’s an increased appetite to move goods by rail as an alternative to relying on trucks. “It is a competitive opportunity to move cargo [by rail] – and usually in larger volumes – than by truck,” he said.

In August, the U.S. Department of Transportation granted the Wilmington port $18 million toward a $22 million intermodal rail project through its Rebuilding American Infrastructure with Sustainability and Equity (RAISE) program. The project will introduce four dedicated rail sidings, three dedicated reach stackers, technology enhancements, improved lighting and 10 acres of pavement for storage and transfer on either side of the new track.

With the new facility, rail moves are expected to increase from 14,000 to 50,000 annually, according to the ports authority. Clark said the authority is working to finalize an agreement to begin construction on the project next year.

Eating up a large portion of this spend is phase two of the Wilmington port’s refrigerated (reefer) yard. Construction on the $22.6 million project, which will add 704 new electronic plugs to service temperature-controlled containers, recently began. When this second phase is completed by next August (a few months behind initial plans), the port’s reefer plug total will reach nearly 1,500.

With the new $26 million South Gate Container Complex now running, demolition of the old gate complex is slated for this fiscal year.

Also this year, the port hosted trial calls with carrier CMA CGM. “They have not made a decision as to whether they’re going to call here on a regular basis,” he said. Wilmington sees seven regular weekly carrier services for container traffic.

Clark said the ports’ goal continues to be to grow its container and general cargo volumes and credits investments over the past several years to traffic growth. “It’s continuing,” Clark said. “We’re at a very positive trend starting off, four months into the [fiscal] year now.”