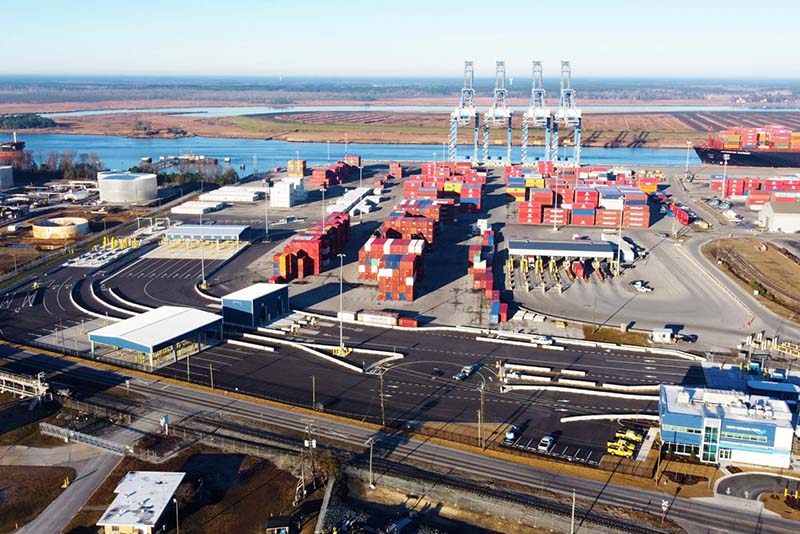 The $26 million project began three years ago. It reconfigured the port’s previous container gate layout used by truckers, increasing the outbound lanes from three to six and inbound lanes from four to seven. Several new technologies are incorporated in the new complex, including weigh-in-motion scales, scanning devices and other features intended to reduce turnaround times.

“All improvements to the container gate complex … enables NC Ports to not only meet the demand of increased container volume at the Port of Wilmington but continue to improve on the best trucker turn-times on the East Coast,” Vogt wrote in an email. “In addition, these improvements enhance the level of service we provide to our trucking community and local port-user community.”

For a single container, the port’s truck turnaround time as of December was about 20 minutes, according to port documents. Congestion at the gate was identified as a key constraint to the port’s growth in its strategic master plan in 2016, which prompted the planning and construction of the new facility.

At the N.C. State Port Authority's board of director's meeting last month, executive director Brian Clark said the complex process of bringing the new facility online required the collaboration of multiple teams. "It is a lot of work," he said. "It's making sure that when we flip the switch, there's no going back from it, so there's a lot of testing and a lot of planning."

In August, the first phase of the project was completed, with port personnel implementing new technologies at the old truck gate complex. This included a new terminal operating system, Navis N4, used at more than 140 container terminals across the globe and “considered the premier software in the industry,” Vogt said.

Also part of the first phase, a community access portal gave truckers access to the new operating system, allowing them to track the status and availability of shipments, Vogt said. The portal includes a TSA-like ability that gives trucking companies information and direction to help accelerate their time through the gate and “validate that there are no issues prior to the trucker’s arrival.”

The second phase includes the opening of an optical character recognition (OCR) barn. Trucks drive through this area upon entering the gate, and it scans relevant markings and weighs the vehicles in motion. “At no point in the OCR Barn does a truck stop, it continues moving through the barn at 15 mph and information is captured while in motion,” Vogt said.

The old 5-acre South Gate complex, located next to the new one, can now be developed into an additional container laydown area to increase the port’s capacity. Last week, the N.C. State Ports Authority posted a video tour of the new area.