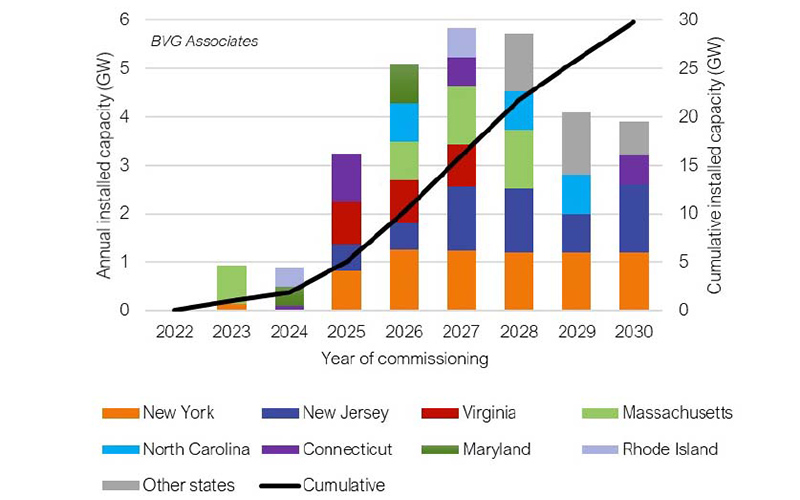 Forging the ambitious project into a reality will call for a coordinated and robust response from private and public stakeholders, necessitating a bulked-up stateside manufacturing scene to onshore a supply chain that’s mostly overseas today.

Unlike other seemingly unlikely pie-in-the-sky projects (Cape Fear Crossing, for one), the Wilmington East Wind Energy Area has committed federal and state backing. In May, the Bureau of Ocean Energy Management (BOEM) intends to auction 127,865 acres (about four times the size of the city of Wilmington) of oceanic continental shelf to be leased, carrying potential to power 1.5 gigawatts of carbon-free energy.

The space begins 15 nautical miles off the coast of Bald Head Island – a starting point the village, Brunswick County, and other local governments have previously objected to, citing viewshed concerns.

Permitting – the phase the Wilmington region finds itself in now – is relatively simple compared to what comes next: lining up an on-the-ground pipeline.

Once leased, years of permitting precede installation; by then, supply chain networks must be in place ready to fulfill the mammoth undertaking.

“The time to start is now,” John Hardin, director of the N.C. Office of Science, Technology & Innovation, told the Wilmington Chamber of Commerce’s policy committee in a Jan. 25 presentation.

“People ask sometimes, ‘Well, are we too late to the game? Have we missed the opportunity?’ The answer is, ‘Absolutely no,’” he told the committee.

Amid a void of a stateside offshore wind manufacturing pipeline, North Carolina is poised to fill the anticipated high-demand need, Hardin said. “The sooner we move on that, the greater the odds are that we will seize that opportunity.”

Last month, the Southeastern Wind Coalition released a cost-benefit analysis it spent a year compiling, determining that a theoretical 2.8 gigawatt wind project would create between $3.7 billion and $4.5 billion in net economic impact for the state, with the high estimate assuming a 100% local supply chain of blades and offshore substations.

During the construction phase, up to 31,000 full-time jobs could be created, and 900 full-time roles would be necessary for the ongoing lifetime of the project, according to the analysis.

Offshore wind is still in its infancy in the U.S. Commercial development began in Europe 30 years ago and continues to advance rapidly in Asia.

Just two projects in the U.S. are already installed in the ocean floor, totaling a combined 42 megawatts (representing 0.1% of Biden’s 2030 goal).

The first commercial and largest offshore wind project, the Block Island Wind Farm, is located in state waters in Rhode Island, with five turbines about 3 nautical miles from the coast. The second, a two-turbine demonstration off the coast of Virginia (the only two active in federal waters), arose out of federal grants to prop up the pilot project.

Close to home, BOEM leased the Kitty Hawk offshore wind farm to Avangrid Renewables for $9 million in 2017 – the first and furthest stage an offshore North Carolina project has reached so far.

Kitty Hawk was first studied alongside two Wilmington-area offshore locations, East and West, which were both put aside in 2015. BOEM moved ahead with Kitty Hawk, which led to its leasing; Avangrid’s construction plans are still under federal review.

On the heels of Biden’s nationwide goal, BOEM first announced in August its intention to revisit its initial 2015 plans for Wilmington East and issued a proposed sale notice in November. A final sale notice and auction is forthcoming.

Once a space on the continental shelf is leased, the company has the rights to conduct scoping activities on the site, including deploying meteorological buoys and studying the sediment, before submitting site assessment, construction and operations plans, which each must be approved by BOEM before any installation begins. From auction to installation could take up to eight years, according to BOEM estimates.

Once installed, the turbines have a lifespan of about 25 years; this necessitates a decommissioning phase.

Each blade is about the length of a football field, which means the colossal structures must be assembled in areas close to shore.

In the state-commissioned report, “Building North Carolina’s Offshore Wind Supply Chain,” consultants sought to ID land that might be useful for staging and assembly activities, including the N.C. State Ports Authority’s former 600-acre “megaport” property in Southport and the former Vertex property off River Road in Wilmington.

There are thousands of smaller components inside the turbines.

“All of those parts need to be made somewhere,” Hardin said.

During the first wave of development, it’s likely parts would be shipped over, but after manufacturers build confidence in the supply of work and their products are proven to be reliable, opportunities abound, according to the DOC report.

The state’s physical characteristics are also a plus: North Carolina has the highest potential for favorable offshore wind energy market development compared to other East Coast states, thanks to the physical size of the continental shelf that falls within federal jurisdiction and ideal wind speeds, according to the DOC report.

Proximity to the port, especially for the larger parts that logistically must be manufactured near the coast, will be a major draw for suppliers. Beyond manufacturing, there’s opportunity in the operations and maintenance sphere once the turbines are installed.

“This,” she said, “is a whole ecosystem of occupational opportunity that can come with offshore wind.”