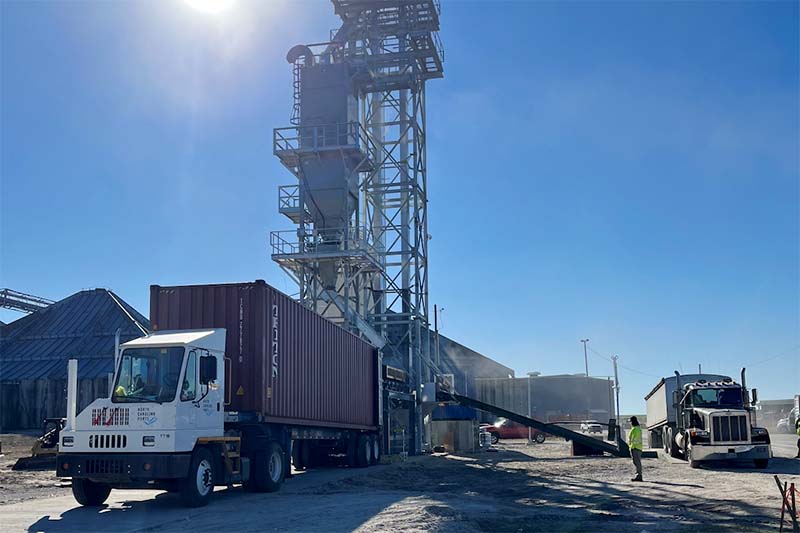 A new facility at the Port of Wilmington is introducing North Carolina soybean farmers to new buyers.

Constructed by Scoular, an Omaha-based company specializing in international trade and supply chain solutions, the transload facility opened last week. It allows for the convenient containerization of soybeans and other agricultural products to be loaded onto ships and exported to Asian markets.

The Wilmington location marks the company’s third location with transload infrastructure on the East Coast.

A majority of North Carolina soybean growers currently sell their product to a couple of local “crushers.” The byproduct gets used for local animal feeds statewide. Less than about 10% of North Carolina-grown soybeans end up in a container, according to Doug Grennan, vice president of Scoular’s select global grains and oilseeds team.

The new facility presents an opportunity to shift market dynamics.

With the Scoular facility now in operation, farmers can more readily unload their soybeans and other agricultural products into containers on site at the port property, which opens them up to a host of Asian buyers they wouldn’t otherwise have direct access to.

“What we're doing there for the North Carolina farmers is bringing the export market to their door,” Grennan said.

Some containerization of soybeans may have been occurring previously as needed, but it wasn’t organized or at scale, according to Owen Wagner, CEO of the North Carolina Soybean Producers Association.

“In the past, a lot of these container-loading facilities were kind of rigged together, they were mobile units almost, whereas this facility is not going anywhere,” Wagner said of the Scoular equipment. “It allows growers to go in there, dump their beans quickly and get on their way.”

Some Asian buyers prefer containerized soybeans (as opposed to the product delivered via breakbulk vessel, which can sometimes mix yields in open sections from various sources), for quality preservation and source tracing, Grennan said.

Empty containers at the Port of Wilmington created the market for this venture, he explained.

“As more consumer demand brought more containers to the United States, more empty containers had the opportunity to be reloaded with something to export. We saw that as an opportunity 20 years ago and said, ‘Let's let's get more serious about this.’

“To get serious about it someone has to solve the physical infrastructure need to actually load the container. You can’t admin your way out of that,” he said.

Board and staff members from the North Carolina Soybean Producers Association pitched Scoular the idea of setting up a permanent base at the Port of Wilmington in early 2020 after touring the company’s similar facility in Richmond, Wagner said. The company’s Richmond operation opened in 2019 and its first in Charleston started in 2011.

Less than a year after the soybean association’s presentation, the North Carolina Council of State approved a 10.5-year land lease for Scoular at the Port of Wilmington in January 2021, allowing the company to use 0.77 acres for $23,100 a year.

Scoular handled the design, construction, and utilities installation, and has employees on site. The North Carolina State Ports Authority hired three new positions to assist with the facility, according to a ports spokesperson, which operates on a daily basis.

“It's a modest investment that has expandability,” Grennan said.

For business to grow, Scoular will rely on the Port of Wilmington to lure in more imports, which in turn creates more empty containers available for exports. “[T]he port has fantastic ambitions and success of attracting more imports … so I don't see that as being a limiting factor anytime soon.”

Between 5-15% of North Carolina-grown soybeans get exported each year, Wagner said.

“We’re a net deficit soybean state,” he said, meaning farmers have to rely on imported soybeans in order to feed all of the state’s livestock.

“Some folks say, ‘Okay, well if you're deficit soybeans, why do you need an international market?’” Wagner said. “And really the answer is competition.”

Wagner said the association appreciates the longtime, steadfast in-state buyers, but “we also feel like the marketplace is a little bit more vibrant when you get those new entrants.”

In 2020, soybeans were the state’s highest-value commodity, at $673 million produced, according to the U.S. Department of Agriculture.

“Soybeans are either neck-in-neck or ... recently surpassed tobacco, depending on how you measure it,” Wagner said.

Even so, the state’s production made up just a fraction of the nation’s in 2019, at 1.5%, according to North Carolina Agricultural Statistics. The crop is mostly grown on the eastern end of the state and is available seasonally, between October and March. In the off-season, Scoular will load wheat and other agricultural products into containers.

Scoular anticipates loading a couple of thousand containers full of soybeans each season starting out, which equates to roughly 50,000 metric tons (or 1.8 million bushels).

“This brings [the market] a new level of logistical finesse and efficiency,” Wagner said.