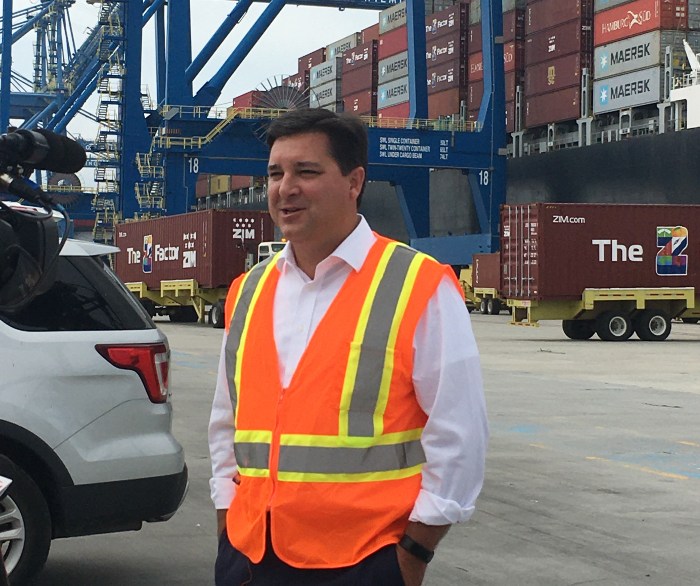 Accompanied by N.C. Ports officials, he watched as a German post-Panamax ship unloaded and took on cargo containers. He saw evidence of expansion in the many construction projects underway at the port complex.

Rouzer’s tour of the port was the last stop on a trip through his district during Congress’s annual August recess. He praised the recent federal allocation of $500,000 to finance a series of environmental studies required for the port’s proposed channel dredging project.

Those studies are a part of the National Environmental Policy Act (NEPA) process, which, if it gives the green light to the dredging project, would allow the Port of Wilmington to welcome larger, heavier vessels.

“For this port to remain competitive, it has to [handle] larger ships,” Rouzer said.

Dredging would deepen the navigational channel from its current 42 feet to 47 feet. While a 5-foot increase in depth may not seem like much, said the Ports’ Executive Director Brian Clark, it would allow for giant ships to carry even more cargo.

Clark said cost of the dredging project is estimated at about $800 million; if it goes forward, it won't be complete for several years.

Despite production and distribution difficulties caused by the COVID-19 pandemic, the number of container moves at the Port of Wilmington increased 2% in the fiscal year ended June 30, 2021, over the previous year, said North Carolina Ports spokeswoman Amy Passaretti.

Rouzer also got an up-close look at the new South Gate Container Complex, which is nearing completion. A new office building will house the port’s container cargo employees. A new high-resolution imaging facility will log each incoming container’s identity number and weight. And incoming truck lanes will increase from four to seven; outgoing truck lanes will increase from three to six, according to Passaretti.

If Congress passes the proposed Infrastructure bill, could there be money for improved rail connections to the Port of Wilmington? Rouzer didn’t hazard an opinion but said that good rail is an “incredibly important component” of port growth. Important to the port also is the new CSX $160 million intermodal terminal nearing completion in Rocky Mount, he added.

Asked if he supports the $1 trillion Infrastructure Investment and Jobs Act now being debated in Congress, Rouzer was non-committal. As it currently stands, the bill would invest $17 billion in infrastructure improvements for ports and $66 billion in passenger and freight rail improvements.

“I’m not sure of my support,” the Congressman said. “We’ll see what happens to it in the Senate and ... what Speaker Pelosi brings to us [in the House].”

Rouzer‘s annual tour through his district gives him an opportunity to hear what’s on the minds of his constituents.

“The biggest issue I’m hearing from employers is they are finding it hard to find workers,” he said. “Our community colleges are doing a good job of training people, but in tourism areas like Wilmington, they need unskilled workers as well; people to work in restaurants and bars.”

Rouzer said that the federal unemployment supplement has given such workers a financial incentive to stay home, but that supplement will end in early September.

He also mentioned concerns about inflation, which he blamed partially on new government spending and partially on workplace shutdowns related to COVID that are limiting production and disrupting supply chains.

“We need to get the government policies right and stop shutting down these places arbitrarily,” he said.

Correction: This version of the story corrects a statistic from the N.C. Ports to say there was a 2% rise in container moves over the previous fiscal year.