Port Of Wilmington To Link To CCX Terminal In Rocky Mount 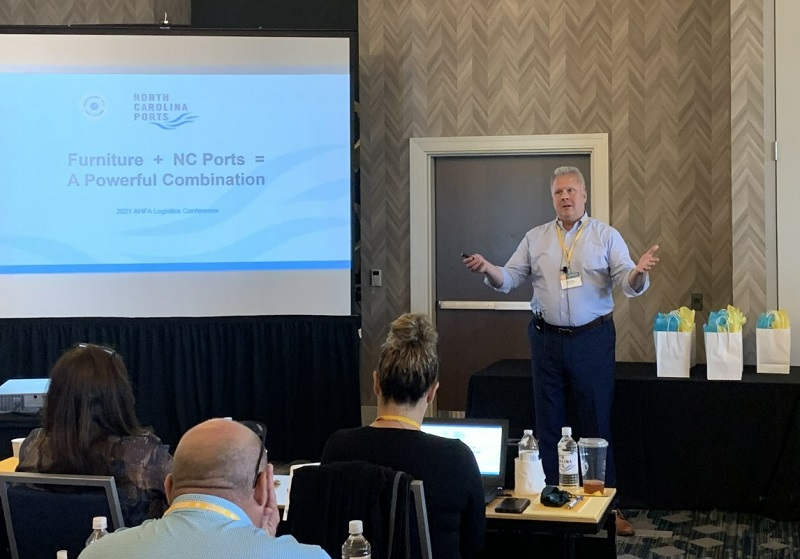 Hans Bean, N.C. Ports' chief commercial officer, gives a talk to members of the American Homes Furnishing Alliance during a conference at the Embassy Suites in downtown Wilmington. (Photo by Christina Haley O'Neal)
Port of Wilmington officials look to link to the Carolina Connector in Rocky Mount this year, opening the port's rail connectivity to the Midwest.

That connectivity could help provide more options for exporters and importers, like those in the furniture industry. The project was part of a series of updates Bean gave on N.C. Ports to an audience of about 100 members of the furniture and logistics industries who gathered at the Embassy Suites by Hilton Wilmington Riverfront.

The Carolina Connector, or CCX, is under construction and is slated to be operational later this year. The CSX project, previously estimated at about $160 million, is being funded in part with up to $118.1 million in NCDOT funds for site development and roadway construction.

“The details of the model and the product, those are still in a sense a work in progress with CSX. So, all that is not completed yet,” Bean said of the port's CCX intermodal service, which will to offer N.C. Ports another inland capability.

“It will function as a gateway to the Midwest and an inland port for us for that northeast part of the state,” Bean said. “It’s twofold; one of the larger facets is that inland connectivity and to be able to also serve that region of the state with a new inland gateway like the Charlotte Inland Port.”

“Getting the Midwest connectivity … it is huge for the ocean carriers. Now they can come here and do all their business so they can get it on the rail network,” he said. “It’s the whole CSX network instead of just getting it to Charlotte.”

“That’s predominantly on the import side,” he said. “There is a lot more of that market that we can cater to.”

The importers contract once a year with the ocean carriers to flow the cargo through the supply chain, and now that N.C. Ports has upgraded its capabilities through its $221 million capital improvement plan, Bean aims for those figures to grow.

“There’s still a lot of folks that aren't using it yet. That other 80% of the furniture market, that's why we’ve been building, so that we can serve industries like that. I mean, it’s one of North Carolina’s biggest industries,” Bean said.

Many of the improvements made to the Port of Wilmington in the past few years have helped better serve the furniture industry, with increased capabilities and services, he said. Still, there is room to grow.

In his updates to the group, Bean said N.C. Ports plans to grow those capabilities over the next decade to increase the current capacity of handling 300,000-400,000 20-foot equivalent units (TEUs) a year, to serving a wide range of industries, including the furniture industry, with a capacity of 1.2 million TEUs a year.

Over the course of the next month-and-a-half, projects will be completed in the ports' capital plan, including activating a new terminal system and gate system, Bean said.

"This is actually going to bring technology to scale," he said. "It really allows us to keep growing but keep that mom-and-pop feel."

"It's really turned into a great product," he said of the Queen City Express, which started operating in 2017. "It's being used across all our ocean services across multiple verticles, including furniture. But it was the first step in intermodal rail here."

"It's a product that we market and contract ourselves," Bean said. "But this product has actually had over 40% growth [in the fiscal year 2019-20] year on year, and I think we're gonna see that again as we're about to close out our fiscal year ... we will also have another inland port footprint in Rocky Mount. So this is definitely a theme you're seeing across the states."