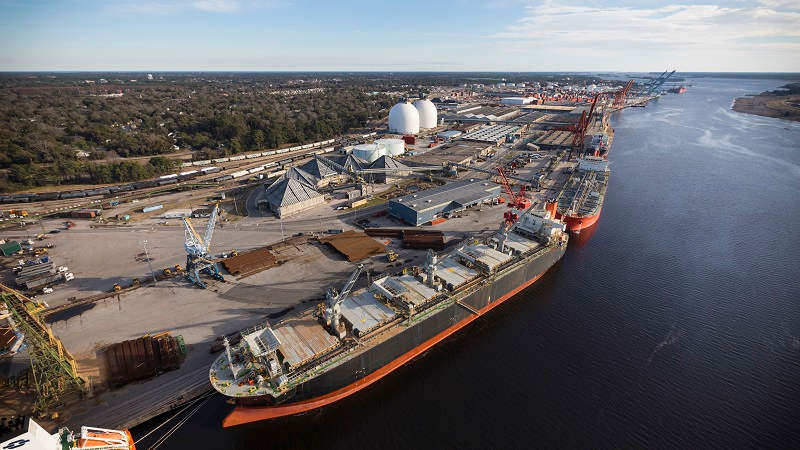 The authority is expanding capabilities through a venture with Omaha, Nebraska-based Scoular, which will build an agricultural transload facility slated for completion this summer, officials said in a news release.

“We are excited to work with Scoular, a company that has more than a century of experience in the agriculture industry, to expand our business offerings to better serve the North Carolina agriculture community,” said Brian Clark, N.C. Ports executive director, in the release.

In the coming months, Scoular anticipates breaking ground on the facility, which will be used to transfer bulk agricultural products to containers for export on ocean carriers. This at-port facility "will receive, store and load agricultural products," stated the release.

The development of the new transload operation is taking place at the Port of Wilmington’s General Cargo Terminal, officials said.

“Scoular looks forward to partnering with the North Carolina State Ports Authority on its exciting journey of growth that brings new agricultural markets to North Carolina farmers," said Doug Grennan, vice president and general manager of Select Global Grains and Oilseeds at Scoular. "Equally exciting for Scoular is working with our steamship line partners in adding another export location within their container network to serve our joint global customers of feed and food products."

Scoular is a 128-year-old company with $4.6 billion in sales, and more than 100 offices and facilities in North America and Asia, stated the release. The company is a supply chain solutions business for end-users and suppliers of grain, feed ingredients and food ingredients.

The ports authority recently received approval from the N.C. Council of State on a long-term land lease of .77 acres with the company for the transload operation's development at the Wilmington port.

The land lease at the port is similar to the leases the authority holds with the Port of Wilmington Cold Storage facility and Enviva, two companies on port property, port officials previously said.

Clark said, “Scoular is one of the top exporters of ag-related products in containers from the United States. This investment will aid in opening new export markets around the globe for North Carolina farmers."