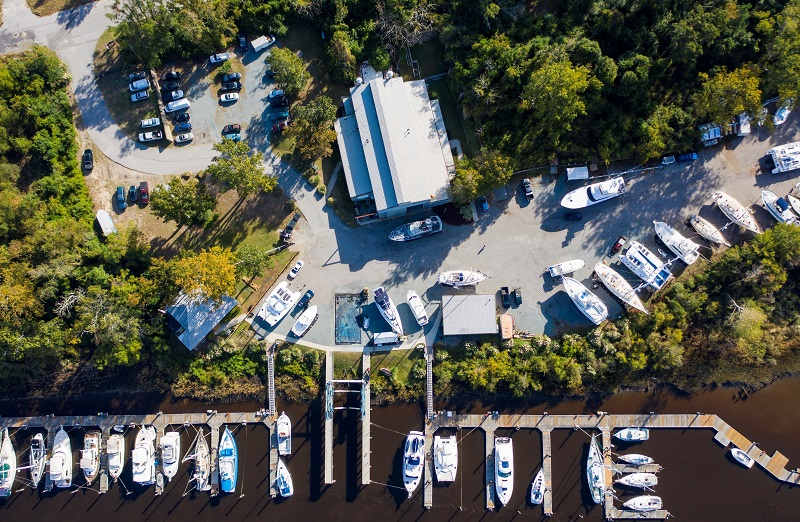 The sale, the amount of which was not disclosed, took place late last week, according to Chris Capone, vice president and CFO of Off the Hook Yacht Sales.

According to a New Hanover County deed, the Jel Wade Drive property and 21 boat slips changed hands in a $3 million deal.

“The Bennett Brothers Yacht name will not continue as part of our business venture,” he said.

Bennett Brothers officials said that after the transition to the new model they will continue the same level of service the firm has offered for 34 years.

Bennett Brothers Yachts, a family-owned firm, has been specializing in marine service, repair and refit of yachts and conducts haulouts for a variety of large boats up to 70 tons, according to a news release.

“We're going to operate, from a high level, as one business together,” Capone said. “And on top of that, we have some plans to really continue the development of that location to give us more opportunities for more storage and more service.”

On top of increasing its service offerings, the acquisition will allow Off The Hook to streamline its business and consolidate four existing Wilmington-area locations and operations into the one Jel Wade Drive location, officials said.

Off The Hook Yacht Sales has three additional locations on the East Coast in Dania Beach, Florida, Grasonville, Maryland and Brick, New Jersey.

The firm will continue to maintain its Wilmington headquarters, Capone said.

Wilmington, being located between the big marinas in the Northeast and in Southeast, is a prime center-point destination for the business, he said.

It’s a good destination for travelers on the Intracoastal Waterway and a great hub for the firm’s professional marine services location not only for yachts, but for a variety of other boats as well, he added.

“When you stop, you can have fun but also you can get some work done on your boat and get ready to go on the next leg of the voyage,” Capone said.

The group also seeks to be involved in educational opportunities in the region and help grow the area economy.

“I think [we’ll] help drive tourism to the area and really just building up Wilmington for everything it has to offer. Between the marketing that [Off The Hook] is doing and the marketing that [Bennett Brothers] has done, we are a young team and we understand the power of digital marketing,” Carson Talbert, Off The Hook Yacht Sales marketing director, said. “Not only just the importance of it but how to do it and how to get the best results from it. Having all of that power around the Off The Hook Yacht Sales and Service brand, but also the location of where we are, it's going to get noticed.”

While the firm has the capability to work on large yachts, it will also focus service on the standard outboard boats as well.

That includes smaller outboard boats, as well as 40-to-50-foot outboard boats, which are “going to be a huge part of our business and focusing on that outboard service and maintenance as well,” Capone said.

The scale of the newly acquired facilities give the Off The Hook business a global reach, allowing work on boats that could come from all over the world, officials said.

“We really want to focus on building up the best full-service operation that we can right here in Wilmington. And down the road, we are always going to look for opportunities and expansion and we’re going to do it right here first,” Capone said.

Connor Bennett, who has stayed with the business as it has transitioned to Off The Hook Yachts, said the family had previously listed a small portion of its unused property for sale on the market, “with no real intentions of selling the entire thing.”

“Connor and Patricia Bennett have done an incredible job building up their service team and we are thrilled to have them on board,” Jason Ruegg, president of Off The Hook Yacht Sales, said in the release.

Ruegg opened Off The Hook Yacht Sales in 2012.

The new business, sales and service, was a good pairing.

“The more Jason and I got talking, the more we realized just how cool of an opportunity this could be for all parties involved to really team up and get us and our crew the ability to really expand into hyper-growth," Bennett said. “The timing was right … and as the conversations grew organically it seemed to become a better idea.”

“They're not coming in to build condos,” he added. “They're looking to continue in the maritime industry, and keep that economy growing and alive in Wilmington.”