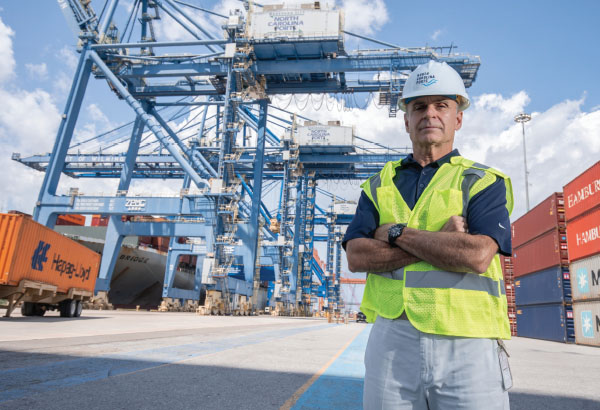 Paul Cozza, executive director of N.C. Ports, will retire at the end of the year. (file photo)

It’s been about a two-year process to plan for the next N.C. State Ports Authority leader, executive director Paul Cozza said Thursday.

Cozza, who began his role with the authority in 2014, announced Thursday his retirement at the end of the year.

The announcement was made during the regular meeting of the N.C. State Ports Authority, which also voted Thursday to promote Brian E. Clark (pictured below), the ports’ COO and deputy executive director, as its next leader.

Following the board meeting Thursday, Cozza said he has been discussing his retirement and succession planning with the board and the human resources committee for about two years.

“When the time was coming up and we were looking at who would be the next individual [for my position], one of the things that was very important to me is, if we could, keep continuity of management,” Cozza said. 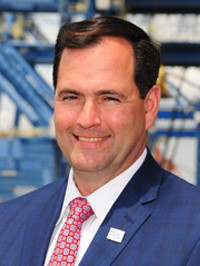 “This organization has seen so much abrupt change of leadership in these last 20 years, that personally for me I thought it was best for the folks in this organization as well as the commercial community that if we could, keep somebody that was visible to them, that was internal in the organization,” he said.

It was clear that Clark – based on his experience, his management and also his leadership at N.C. Ports –was the right choice to fill the executive role, Cozza said, adding that his recommendation went to the board, which made the ultimate decision Thursday.

“Being selected for the position, I’m just truly honored that the board, on Paul’s recommendation, made the decision to select me as the next executive director,” Clark said. “It was a long process … and I appreciate everybody’s time working through that process over the last couple of years.”

The decision, which also included the state secretary of transportation, had started to come together in “these last months,” Cozza said.

“Brian understands this commitment and we believe his strong leadership will help further Paul’s legacy and expand port business,” said Eric Boyette, secretary of N.C. Department of Transportation, in a news release.

Clark has had a hand in transforming port facilities into some of the most efficient on the East Coast, stated a news release. Late last year, the Port of Wilmington was named the “most productive port and Wilmington’s Container Terminal the most productive terminal.”

“The Board of Directors is excited to have a proven leader in the maritime industry step into this role,” said Robert Wicker, chairman of the board, in the release. “It has long been a part of our plan to have Brian move up within the organization and we are confident his more than 20 years of experience will continue to propel NC Ports forward as a competitive East Coast port.”

Clark joined the authority, also known as N.C. Ports, in 2017 after previously serving as managing director for APM Terminals at Port Elizabeth in New Jersey.

Clark has more than 20 years of expertise in the maritime industry having worked in senior positions on the operations side with industry leaders, according to N.C. Ports website.

Clark has also helped to facilitate several pieces of the ports’ capital plan, including new cranes and dock improvements, and has started a new terminal master plan to increase the Port of Wilmington’s container volume.

There is still work to be done in the ports’ capital plan, and the port is also bracing for more changes that come along with the impacts of COVID-19 pandemic on the overall global shipping industry.

“We are in very uncertain times right now. And so it’s working on in one team as we try to navigate some of the uncertainty right now in the industry and the global economy,” Clark said of his role in the work ahead for the ports. “And it’s continuing to look to the future and planning the development of the facilities to support the cargo opportunities.”

The port continues with its capital plan and awaits possible federal approvals to start the process of deepening the Wilmington Harbor.

Cozza said he will remain in Wilmington, but he's not sure yet exactly what his next endeavor might be.

“The future is a little uncertain. I want to obviously continue to be active. I would love to do other things where I can continue to help the state, or help other entities around the area,” Cozza said. “But no question, we’re staying here.”