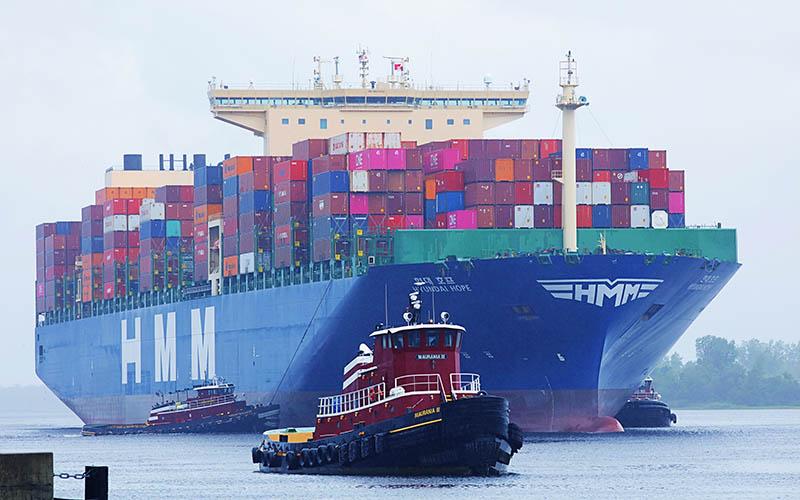 Major capital improvement projects at the Port of Wilmington over the years have made way for one of the largest container vessels visiting ports along the East Coast, the HMM's MV Hyundai Hope. (Photo c/o N.C. Ports)
The N.C. State Ports Authority expects to see some direct economic benefits from landing the larger ships visiting ports along the East Coast.

Last month, the authority made history with the largest container ship ever to visit the Port of Wilmington.

The MV Hyundai Hope’s trip to the port May 20 marked a significant step in developing economic oppor­tunities for the region and state, said Paul Cozza, executive director of the N.C. State Ports Authority, also known as N.C. Ports.

“Taking in these larger vessels opens up the possibilities for new trade impacts. Directly, with these ships coming in, we’re going to expect some more volume connected with that, somewhere about 15% to 20% more,” Cozza said, adding that the indirect economic ripple effects from the big ships will be seen in the future as more come in.

Operated by Hyundai Merchant Marine (HMM), the nearly 14,000 TEU (20-foot equivalent unit) vessel is in a partnership with a large ship­ment group called THE Alliance, which for Wilmington, links the port to others in Asia and South America.

The significant big-ship milestone in the authority’s history, however, comes amid the COVID-19 pandem­ic and its overall impact on the trade and transportation industry world­wide.

“We’re right now doing much bet­ter than ports around us on the con­tainer side,” Cozza said. “And what started as a supply-side issue has now turned into a demand issue.”

When COVID-19 cases began to be reported in China around the Lu­nar New Year in January, the impact of the manufacturing shut down there created a dip in overall ship­ping, which resulted in the canceled sailings at many U.S. ports this year.

Although manufacturing overall has since returned in China, restarting trade and shipping there, the impact still can be felt in the ports’ schedule.

Since March, N.C. Ports has had on its books a total of 14 scheduled canceled sailings, also called blank sailings, due to COVID-19 trade effects, with some of those cancellations happening through July.

But there is still uncertainty in the overall global market. And the authority has forecasted about an 8% to 9% revenue decrease in the next fiscal year, which starts July 1, Cozza said.

By the end of this fiscal year, however, N.C. Ports still expects to record-setting revenue numbers, he said.

The pivotal moment in N.C. Ports’ history came following the completion of several projects in its $221 capital improvement plan: the purchase of three new neo-Panamax cranes; a second-phase turning basin expansion; major construction to its docks; and raising the height of power lines that cross over the Cape Fear River.

Each of the projects was geared towards luring 14,000 TEU vessels and growing the port’s capabilities to handle two such vessels at the port simultaneously.

The MV Hyundai Hope docked at the port a little more than one month after N.C. Ports completed the second phase of its turning basin expansion project, the final piece in its plan to get these big ships to the docks.

Still, more is in the capital plan for projects on land, including updating its terminal operating system and improvements to its gates.

“We know that we have an identifiable underserved market here in the Carolinas,” Cozza said.

“All of that will come into play,” Cozza said. “N.C. Ports is very much now on par [with], if not better than, the competition around it. That then will bring additional economic contributions and development.”