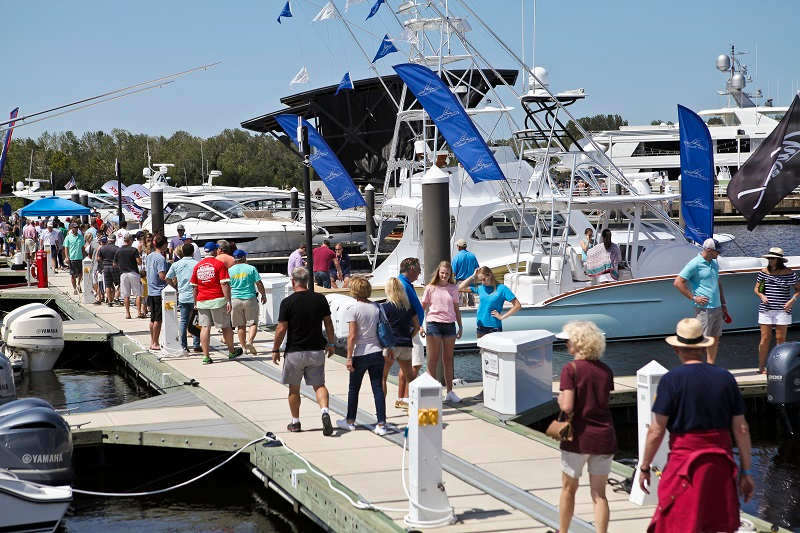 Based on anticipated attendance numbers from boat show organizers, the Wilmington and Beaches Convention and Visitors Bureau (CVB) estimates that the raw economic impact from the 2018 Wilmington Boat Show will be more than $619,000, according to Connie Nelson, spokeswoman for the Wilmington CVB.

Using the 2.5 multiplier, the total economic impact is estimated at more than $1.5 million, she said.

"As an upscale consumer event, the Wilmington Boat Show draws both locals and visitors who are considering a boat purchase. The types of boats that are featured at this show attract an affluent audience who enjoy spending money at local shops, restaurants, hotels and attractions when they travel," Nelson said in an email.

The third annual show is taking place Sept. 7-9, at the Port City Marina, Pier33 and the Wilmington Convention Center.

JBM and Associates President Jacqui Bomar, the organizer of the annual boat show in Wilmington, said she is looking forward to greater attendance from last year’s show, given the impact of Hurricane Irma in 2017, which prevented some show boats from reaching the docks of Wilmington.

“Having dogged a hurricane on the second year … that was heartbreaking because you work so hard and are so excited to bring a second year, and you look out and about half the docks are empty,” she said.

Although the show lost a day because of the storm last year, overall the event did “very well,” she added.

“This year we’re just really, really excited about it and expect to have a phenomenal show. I’m expecting about 15,000 people [over three days],” Bomar said.

JBM and Associates, a South Carolina-based boat show management company, is now producing five shows a year, Bomar said. On top of the show in Wilmington, the company also has two shows in Charleston, South Carolina, a show in Savannah, Georgia, that’s in its 17th year, and added an in-water show in Jacksonville, Florida this year, she said.

JBM is wrapping its 2018 season with the Wilmington show. The Wilmington Boat Show will feature more than 70 different boat lines, including skiffs, cruisers, sailboats, fishing boats and yachts, officials said in a news release.

The boat show is estimated to employ about 1,000 people, including boat show staff, facility staffing and vendor staff, according to Debbie Taylor, operations director with JBM.

The boat show has included more than 100 boat lines, between 140 and 150 vendors, and about 40 boat dealers each year, she said.

The event kicks off with a VIP party at Port City Marina’s outdoor venue space, the Boatyard, according to the release. There will also be a host of other activities during the annual show, including food and drink.
Because of construction at Battleship Park, Bomar said the new free water taxi location for the event this year will be Point Harbor Marina, 1551 Point Harbor Road.
A unique feature of the show is its demo docks, which provide visitors an opportunity to do sea trials. officials said.

The Wilmington Convention Center will be the host location for boats-and marine-related exhibitors, as well as the Wilmington Fishing Expo sponsored by Coastal Carolina Fisherman, event officials said in the release. There will also be a kids fishing clinic held on the convention center event lawn.

Live music will be performed throughout the show, Bomar said.

Yamaha Corp. signed a multi-year contract with the Wilmington Boat Show, and other in-water shows with JBM, as the presenting sponsor, she said.

The Wilmington venue gives the company an opportunity to work directly with boat builders and dealers and provides customers, said David Ittner, manager of tournament, sponsorships and pro staff for the Yamaha Marine Group, in a news release. It's also an opportunity to showcase the company's "new XTO Offshore Integrated Power System – the V8 5.6L outboard, along with Yamaha’s fully integrated boat control system – Helm Master,” he said.
Bomar said this boat motor will have its first showing at the Wilmington event.