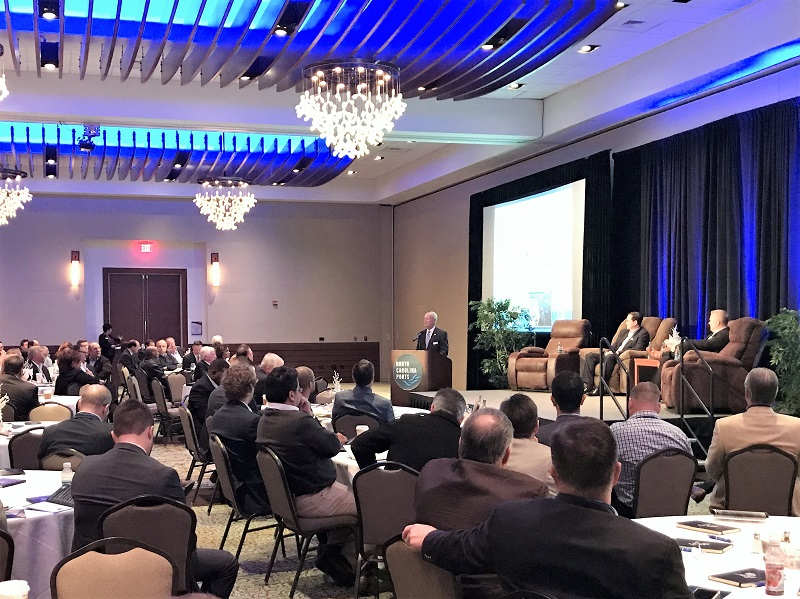 N.C. Ports hosted the first Cold Chain Summit at the Wilmington Convention Center on Wednesday, and invited those in the industry to talk about the future of the port's position as a cold chain gateway. (Photo by Christina Haley O'Neal.)
N.C. Ports is positioning itself to be a more competitive cold chain gateway.

That gateway, which encourages the use of the port as a temperature-controlled market option for more imports and exports, was the focus of morning presenters at the first N.C. Ports Cold Chain Summit at the Wilmington Convention Center on Wednesday.

The event took a look at expanding the ports' cold chain market and had 130 attendees register from within the industry, ranging from ports officials to economic developers and those within the trade industry sectors, according to officials.

Officials who spoke Wednesday morning said N.C. Ports has been sizing up its assets not only for more opportunities in agricultural exports, but also with the aim of expanding opportunities in cold chain importing.

The Port of Wilmington Cold Storage facility opened up in August 2016, which officials said would help in-state export activities.

"We hope that several of the carriers in the movement today recognize that the positioning of where we are at the port ... in these commodities, that offers a great opportunity for carriers to be able to grow their services here, [and] bring additional services here to accommodate the products available," he said.

While not as big as California, Ohio or Texas, the state has a more intensive market, producing a wide range of products, he said.

“North Carolina … is an amazing state for agriculture,” Brown said. “One of the most intense agricultural regions in the country is just right here at our back door in between Raleigh and Wilmington.”

The state also holds millions in cash receipts in the tobacco, pork, poultry, turkey, sweet potato, blueberry, watermelon, strawberry, tomato and peanut markets, he said. That's according to numbers for specialty crops in 2015. And that agricultural production and demand has been steadily increasing over the past five years, he said.

The major products --- sweet potatoes, pork and poultry -- are carried and spread throughout the national and global market, he said.

"North Carolina produces over half the sweet potatoes in the country, and if you look at the growth .. there’s explosive consumption of sweet potatoes here in the United States and Europe," Brown said.

That, as well as blueberries, are also part of the growing demand in the superfood (generally defined as food that is high in vitamins and mineral) industry.

North Carolina also has one of the largest processing facilities in the country for pork, he said. And in poultry, with the addition of Sanderson Farms to the North Carolina market along with the expansion of other large poultry producers in the state, lies an opportunity for an increase in those exports.

“Just remember how important trade is for our North Carolina agriculture,” Brown said to the crowd. “We feed the world, and a lot of that comes out of eastern North Carolina."

The port has been a poultry and sweet potato "powerhouse," said Hans Bean, vice president of trade and development at N.C. Ports. But opportunity remains for the port on the grocery sector side and consumer base for more imports.

To facilitate that need, the N.C. Ports will activate its certification, though the U.S. Department of Agriculture’s (USDA), for cold treatment at the Port of Wilmington on Dec. 1, “which will open up more doors for produce imports,” Bean said. The certification will give the port a "stamp of approval" for maintaining temperatures to comply with USDA quarantine regulations, he said.

This certification will serve as a huge asset for that market, he said.

“Traditional gateways are farther to the north and down in South Florida and those will stay a big part of the game, but I think we have a great opportunity to roll and create efficiencies and open up Wilmington as a cold gateway,” Bean said.

Pairing the exports in agriculture with imports from the grocery sector will increase the usage of its cold storage facility and overall usage of the port, which has seen an increase just within the last year, Bean said.

“Just since last summer, in the midst of a lot of upheaval in the ocean carrier market … what may have been one of the worst of times in some ways, helped reset the foundation,” he said. “We have a certain opportunity to serve nations and up the supply chains."

During the summer of 2016, the port had five carriers using the port of Wilmington connecting to about 12 carrier port pairs globally. Over the course of 2017, the port has served 15 carriers with more than 65 carrier port options, expanding the number of connections importers and exporters can use around the globe, he said.

“I think this is vital for us because we have certain opportunities to serve niches, but we also need to be in the larger global game to be viable for people’s supply chains," Bean said.

With more than $200 million in infrastructure improvements ongoing at the Port of Wilmington, the ports continue to push for that global position, he said. The berth reconstruction is ongoing, Clark said, and the port has a third order in for a new super post-Panamax crane to be in commission by 2019.

However, the port -- which just underwent a turning basin expansion back in July 2016 -- is now looking at expanding the basin again. Clark said they are working with engineers to evaluate expanding the basin another 100 feet to accommodate even larger vessels that are visiting the East Coast.

“We are able to handle up to a 10,000 TEU (20-foot equivalent units) ships today. On the East Coast, we have seen over the last six months or so, the capacity cascading up to 14,000 TUE ships. And for us to remain competitive we need to be able to handle those same size vessels in the future,” Clark said.

The expansion and future capital improvement plan is all part of the port's future development, he said, which also includes expanding the Port of Wilmington container yard.

“A lot of investment is being made on the container side of the business, as well as rail infrastructure, warehouses, transit terminals and lease space," he said of the ports' future.

The Queen City Express, which began operating in July of this year, also provides an opportunity for expanding markets. The line provides a rail connection between the Port of Wilmington and Charlotte, the first intermodal rail connection at the port in more than 30 years.

“The volumes that started out -- right now we are focusing on two customers that are utilizing that. But this is an option as well for any volumes that are moving to the Charlotte area,” Clark said.

From a gateway standpoint, disruptions and diversification are ongoing factors in the global carrier chain, Bean said.

"I think unfortunately with the natural hurricane season this year made a lot of people take a different look at gateways they are using," Bean said.

"Disruptions in intermodal access – you don’t ever want disruption -- but diversification and risk mitigation, that’s a big part of the supply chain and a big part of logistics thinking. So the way we approach this grocery sector and serve it, the way we provide round trips economics for the ocean carriers and then ultimately importers and exporters realize the value – it going to continue to expand [Wilmington's] gateway,” he added.