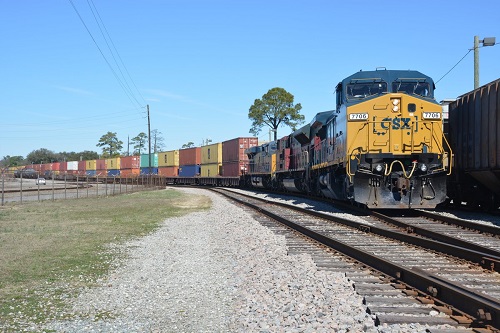 On that day, N.C. Ports and CSX will activate a double-stacked train service that runs between Wilmington and Charlotte, dubbed as the Queen City Express, according to N.C. Ports.

“The Queen City Express provides premier rail service over competing ports for existing and future container customers in one of the most significant economic centers in the Southeastern United States,” N.C. Ports Executive Director Paul Cozza said in Thursday's announcement. “In addition, further establishing our inland terminal helps answer the request of many cargo owners asking for improved connectivity to international markets.”

The regularly scheduled service offers the availability of containers at the Charlotte Intermodal Terminal owned by N.C. Ports. The train also provides connectivity for the all-container services currently calling on the Port of Wilmington.

Officials said the daily service would be one of the fastest, most direct rail services in and out of the greater Charlotte region from a port in the Southeast U.S. The Queen City Express now an additional option for Charlotte importers and exporters, N.C. Ports spokesman Cliff Pyron said.

It's been 30 years since the Port of Wilmington was connected to an intermodal rail service, Pyron said.

"This service, dovetailed with the investment that CSX is making in Rocky Mount, is a testament to our dedication to the State of North Carolina and North Carolina Ports," Dean Piacente, vice president of CSX Intermodal, said in the news release. "In addition to the connection to Charlotte, CSX will also provide future access to a transformational, state-of-the-art intermodal rail terminal in Eastern North Carolina – the Carolina Connector."

Last summer CSX and the N.C. Department of Transportation announced that Rocky Mount would be home to the Carolina Connector (CCX), a key transportation hub in the Southeast for containerized freight, according to the release.

Officials said the combination of CCX and the Queen City Express would lower transportation costs for businesses while taking trucks off the road, reducing emissions. According to the release, one intermodal train can take as many as 280 trucks off the road.

CSX officials expect the company will continue to see intermodal growth in the coming months, officials said this week during an earning call about its second quarter results.

“Traditionally intermodal has been a key growth market for us, we have been able to grow this base domestic at 5% to 10%, then we don’t see any reason why that should change, but it’s always about converting traffic of the highway system and what Hunter is focus[ed] on in addition to intermodal is also to convert things the highway into our merchandise network by significantly improving that service product,” said CSX's Chief Marketing Officer Fredrik Eliasson, according to a Seeking Alpha transcript of the call.

Despite these service expansions, the Jacksonville Florida-based rail company continues to restructure and make operations more efficient. Earlier this year CSX announced the company was eliminating 1,000 management positions and after this week's earnings report, the Florida Times-Union reported another up to 700 more job cuts could be coming.