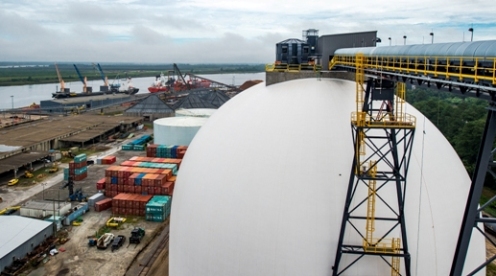 The two Enviva domes at the Port of Wilmington are 180 feet tall. (Photo courtesy of N.C. Ports)
Wood pellets from North Carolina are about to start their journey across the Atlantic.

The towering Enviva wood pellet domes at the Port of Wilmington began operations this week and are loading the first shipment bound for Europe on Thursday and Friday, aboard the 655-foot Norwegian-flagged ship Spar Pyxis, officials said.

“The Enviva domes are an important part of our ports modernization plan,” said N.C. Ports Executive Director Paul Cozza in a news release. “This project will increase bulk exports, thus expanding the business of our general terminals, which is a vital portion of our strategic plan.”

The waste wood product will end up as fuel for large municipal boilers across Europe, where wood is increasingly replacing coal as a means of producing heat and electricity. By using wood pellets instead of coal, Enviva said that countries can reduce their carbon footprint by about 80 percent.

Factoring in facilities that include the terminal at the Wilmington port and the Enviva wood pellet production facility in Sampson County, Enviva employs more than 100 people and anticipates an annual economic impact of about $160 million. The company has signed a 21-year lease with two five-year renewal options with N.C. Ports.

The Enviva terminal, which includes two storage domes that each hold up to 45,000 metric tons of wood pellets, will ship more than 1 million tons of pellets annually, according to port officials.

Enviva is the world’s largest producer of wood pellets, and operates six plants that are located in the southeastern United States and now produce about 2.3 million metric tons of wood pellets annually.

“The Port of Wilmington is a key nexus for global commerce and an economic engine for the state of North Carolina,” said Enviva CEO John Keppler in a news release Thursday. “We are excited to be an important part of the port’s ever-increasing volume of trade.”

“This is about furthering our economic contribution to the City of Wilmington and the State of North Carolina,” said N.C. State Ports Authority Board chairman Tom Adams. “On top of the 100 jobs Enviva has created, there are nearly 200 additional jobs supported by their shipping, trucking and logging needs and the economic activity those jobs create.”

The wood pellets are delivered to the Port of Wilmington by both truck and rail. The rail link has the capacity to handle about 50 percent of the total volume with the remainder of the product arriving by truck.

In addition to Enviva, another public-private partnership, the Port of Wilmington Cold Storage Facility, recently started operations at the port. That facility offers a 101,000-square-foot refrigerated warehouse used to maintain specific temperatures for the storage of perishable goods, such as fruits, vegetables and poultry. It’s the only the on-port cold storage facility in North Carolina.