Wilmington Port Signs New Deal For Service To And From Asia 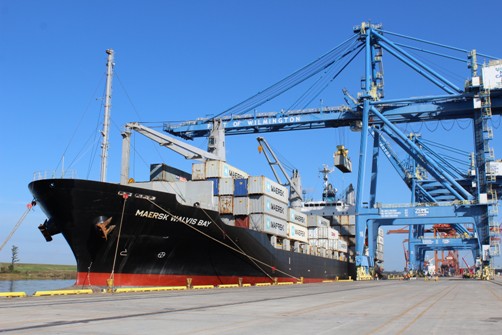 "This new agreement will help businesses that depend on international commerce by enhancing our state's connection to vital international trade routes, and allowing larger container vessels to call on the Port of Wilmington," said Gov. Pat McCrory in a news release.

The TP10/Amberjack’s rotation includes direct calls to the heavily populated ports of Qingdao, Xingang, Ningbo, Shanghai and Busan in Asia, and is the only service offering direct linkage to the U.S. East Coast into and out of Xingag. This transpacific service traverses the expanded Panama Canal on its way to U.S. East Coast ports, offering the fastest coverage from Asia to Wilmington.

"The ports are a critical component of our state’s transportation system,” N.C. Transportation Secretary Nick Tennyson said in the news release. “This new partnership is evidence that our investments are paying off and are helping to keep North Carolina at the forefront of today’s global economy.”

The enhanced TP10/Amberjack service at the Port of Wilmington and consists of 10 Panamax 4,300-5,100 TEU ships with the arrival of the SeaLand Lightning.

“North Carolina has a ripe market that continues to drive the decisions of the world’s biggest container companies,” said Paul Cozza, ports executive director. “Our inclusion in this rotation not only improves our visibility in international trade but also ensures the businesses that rely on us will have that much needed connection to Asia.”

The N.C. State Ports Authority had relied on Hanjin for between 7 to 8 percent of its annual revenue, or about $3 million, and its routes to and from Asia. The South Korean company filed for bankruptcy in August.

“Our beneficial cargo owners were clamoring for a stable Asia service in this location,” said Greg Fennell, ports chief commercial officer, in a news release. “The TP10/Amberjack provides us with greater convenience and enhanced transit times for shippers doing business in Asia.”

For an update on the latest development and construction at the Wilmington port, see the Nov. 4 edition of the Greater Wilmington Business Journal.