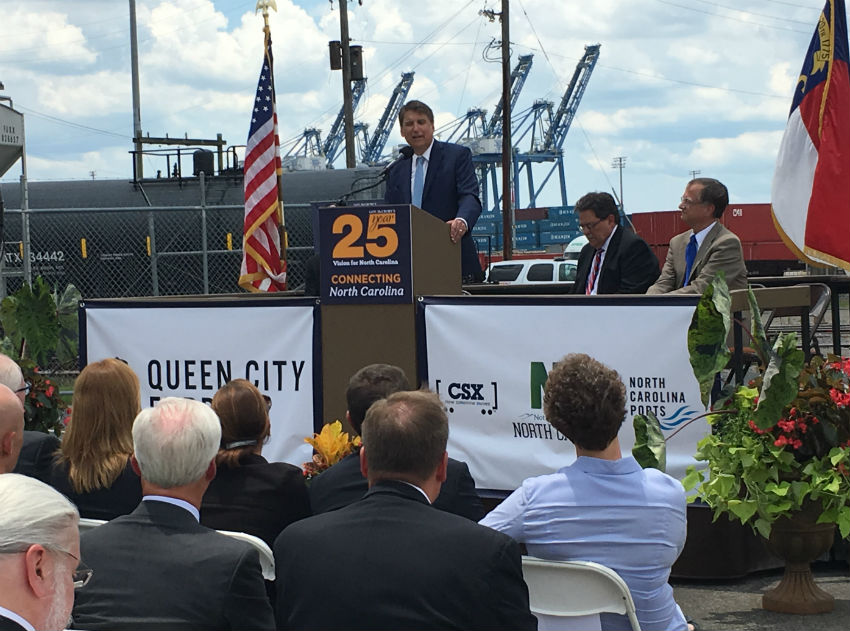 With the Port of Wilmington as a backdrop, Gov. Pat McCrory addresses a news conference at the N.C. Maritime Building in Wilmington on Tuesday to announce The Queen City Express, an intermodal rail service to Charlotte. (Photo by Cece Nunn)
A double-stacked freight train with non-stop overnight service coming in the fall will give Wilmington something it doesn't have now: an intermodal connection between the Port of Wilmington and Charlotte, Gov. Pat McCrory and other officials announced Tuesday.

Earlier in the day, a group that included the governor, N.C. Ports Executive Director Paul Cozza and officials with freight rail carrier CSX had traveled to Rocky Mount to announce that CSX and the state of North Carolina will build a new intermodal terminal in Edgecombe County called the Carolina Connector, or CCX.

While the CCX is expected to be complete by 2020, potentially create 1,500 jobs and have a positive economic impact on the state's ports, The Queen City Express service for the Port of Wilmington is planned to start in September and be the only direct service into the greater Charlotte area from a port in the Southeastern United States, according to a news release. The intermodal rail service will traverse the existing CSX Class I network between the Port of Wilmington and CSX's intermodal terminal in Charlotte.

"A service like this does not exist today ... so this is a fantastic, just an additional feature for our customers, both our shipping customers as well as the cargo customers around Charlotte and the Charlotte region. That Charlotte region stretches outside the state and all around the western part of our state," said Cozza, during a news conference in the parking lot Tuesday at the N.C. Maritime Building on Burnett Boulevard in Wilmington.

After the news conference in Wilmington on Tuesday afternoon, Cozza said in addition to adding another capability for the port's customers, The Queen City Express is "a start for things to come. We want to start building our intermodal so when the CCX opens ... we'll be set and ready to go."

In addition to ports in Wilmington and Morehead City, the N.C. Ports also have inland terminals in Charlotte and Greensboro.

According to a news release form the governor's office, CSX will invest $160 million in the Rocky Mount project, with the N.C. Department of Transportation contributing $100 million for track improvements as well as terminal infrastructure through the state's new transportation funding formula.

Once complete, CCX will transfer containerized cargo between trains and trucks, processing more than 260,000 containers per year initially and generating business for the state's ports, including the Port of Wilmington, the release said.

The hub and related track improvements are set to take two years to construct once all necessary environmental permits are obtained, the release said. Carolinas Gateway Partnership, a public-private economic development agency headquartered in Rocky Mount, controls nearly all of the land needed for the facility, located along CSX's main rail line in a primarily industrial area, according to the release.

In January, CSX announced that the Carolina Connector would be built in Johnston County with a price tag of $272 million. But the Johnston County plan ran into roadblocks, with some owners of land that had been selected for the site objecting to selling their property.

The possibility of the state losing the CSX facility was of great concern to state officials, but building consensus was important, McCrory said Tuesday during his Wilmington visit.

"We were very fortunate that several counties stepped up to the plate and presented proposals to CSX and the state of North Carolina, and the Rocky Mount proposal was just an excellent site, and they had an excellent team putting that economic development plan together ... There's no doubt that CSX probably could have gone across the border, and there were a lot of other locations that wanted this extremely important intermodal facility," McCrory said.

CCX will directly employ 149 workers at salaries averaging $64,047 per year, according to the governor's office. Currently, the average annual wage in Edgecombe County is $32,725.

“The close proximity of Rocky Mount to CSX’s main north-south line, I-95 and the future I-87 and I-42 corridors, as well as convenient access to the Raleigh economic center made this an ideal location for a regional transportation hub,” state Transportation Secretary Nick Tennyson  said in the release. “This project builds on the investments we have made in our rail system, our ports and other infrastructure to help us meet growing logistics demands and improve the movement of goods throughout North Carolina.”

“Creation of the Carolina Connecter will have a positive impact in the area by generating more business for the State Port in Wilmington, and potentially leading to new business ventures in the area,” said Wilmington Chamber of Commerce chairman Mitch Lamm, who attended Governor McCrory’s press conference Tuesday, in a Chamber release.  “Improving rail capabilities will help expand the Ports’ market reach and lower transportation costs for those using the Port. This is very good news for Wilmington, as it will create a competitive advantage for the region.”

CSX serves nearly two-thirds of the American population through a rail network spanning 23 states, two Canadian provinces and the District of Columbia. In North Carolina, CSX maintains an intermodal terminal in Charlotte, bulk transfer terminals in Charlotte, Raleigh, Wilmington and Winston-Salem and major rail yards in Hamlet and Rocky Mount.

The release said that helping facilitate CSX’s choice of North Carolina for the project is a Job Development Investment Grant approved Tuesday by the Economic Investment Committee. Under the terms of the grant, CSX is eligible to receive as much as $4.3 million in total reimbursements. Payments will occur in annual installments pending verification by two state agencies that the company has fulfilled job creation and capital investment requirements.

“The Carolina Connector intermodal hub will do far more than provide new jobs in Rocky Mount,” said Commerce Secretary John E. Skvarla III in the release. “It will enhance connections among suppliers and buyers in a way that spins off exciting opportunities for job growth throughout North Carolina.”