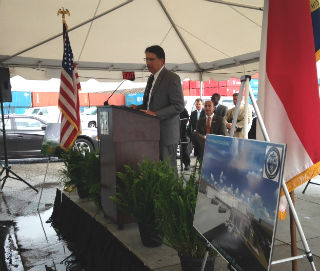 Gov. Pat McCrory speaks Tuesday afternoon at a groundbreaking ceremony for the cold storage facility at the Port of Wilmington. (Photo by Cece Nunn)
Gov. Pat McCrory and other state and local officials marked the ceremonial start of construction Tuesday on a planned 101,000-square-foot cold storage facility expected to help increase exports at the Port of Wilmington.

"This is a port for the entire region, for the entire state, for the entire Carolinas and for our country," the governor said in a keynote speech Tuesday afternoon, before state and local officials dug into a rectangle of earth on the facility site.

The cold storage building, expected to create at least 100 jobs, will enhance the port’s ability to export poultry, pork and sweet potatoes, and import seafood, fruits and vegetables, officials said.

"It improves the capabilities for us here at the ports, which is going to bring benefits to the state," said state ports CEO Paul Cozza. "As quickly and efficiently as you can use inventory, in any business, is a plus."

In February last year, the N.C. Ports Authority board approved the public-private partnership with the facility’s developer, Chuck Schoninger, and his company, USA InvestCo.

Schoninger said Tuesday that the project was created through the EB-5 immigrant investor program, which enabled his company to raise $15 million for the facility, with $13 million of that amount coming from Chinese investors.

Schoninger said final site plans for the project were submitted to the state Monday. While Tuesday's event marked the ceremonial groundbreaking for the facility, actual construction is expected to begin in about three weeks after state permits are issued, he said. From start to finish, construction on the building will likely take nine months, Schoninger said.

Before the ceremony Tuesday, held on the building site within the port, ports authority board chairman Tom Adams said the Ports of Wilmington and Morehad City together have an economic impact on the state of $14 billion, have created 76,000 jobs and generate $700 million in state tax revenue.

McCrory encouraged attendees Tuesday to support his nearly $3 billion highway and infrastructure bond proposals, which would require approval from the state General Assembly and then voters. The governor cited the state's ability to take advantage of historically low interest rates as one of the reasons the bonds are crucial.

"We need to get this on the ballot," McCrory said. "People understand that you have to invest in the future, especially at a time when we can afford it."