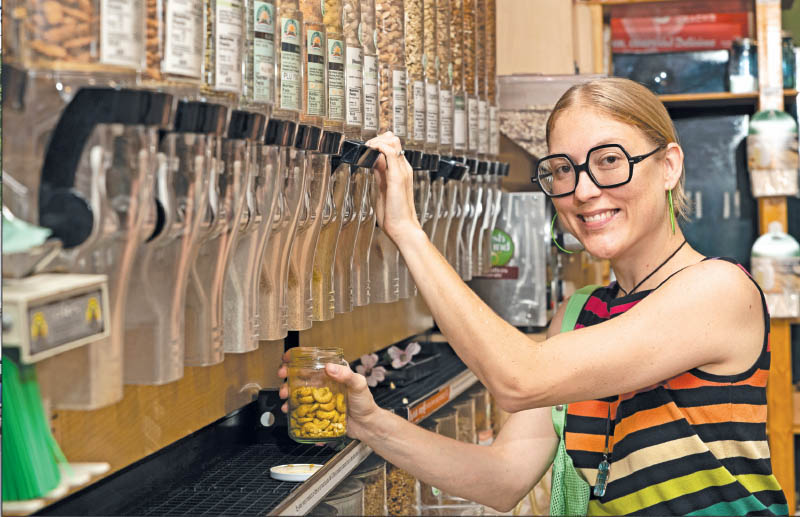 Kelsey Gibbs, owner of The Wonder Shop and a member of the Tidal Creek Co-op board, demonstrates the use of the bulk bins at Tidal Creek, a method of cutting down on the use of containers that end up in landfills. (Photo by Michael Cline Spencer)
Each year, at least 8 million tons of plastic accumulate in the ocean – an amount that equates to a full garbage truck being dumped into global waters each minute. If that rate continues, the amount could increase to a corresponding two trucks per minute by 2030 and four by 2050. To escape this prediction, several local, eco-friendly business owners practice and promote zero-waste customs.


Last year, Kristen Crawford launched her business, Darwin’s General Store, with the slogan, “the natural selection for all your needs.” Her e-commerce site offers zero-waste home and personal goods, from razors to reusable silicone bags.

“By 2050, it is estimated that there will be more plastic in the ocean than there are fish,” Crawford said. “That’s by weight, ton for ton.”

Oddly enough, Crawford, formerly a data analyst, changed careers after compiling research about plastic waste in an effort to convince executives at her former workplace to add a recycling service.

“That’s when I found out that, in New Hanover County, 70 percent of what ends up in our landfills is either compostable or recyclable,” Crawford explained. “It’s mind-blowing to me that we’re at the forefront of it. We can walk into the ocean, yet we’re using 1,500 plastic bags – that’s the average number an American household uses each year. I had to do something about it.”

Crawford believes education is the solution, which is why, in addition to selling eco-friendly products online and at pop-ups around town, she offers residential and commercial consulting. She’s designed zero-waste education modules to share with local corporations and their staffs, showing alternative options for better environmental practices and identifying biodegradable products.


“Recycling is not the option anymore,” Crawford said. “My new solution is refusing it.”

“We as the consumer, we drive this [waste],” she said. “We want convenience, fast, easy. We made this and if only we just start being more mindful … We all live on the same rock.”

At her shop, Gibbs practices many zero-waste customs – it’s incorporated into the model for her clothing store. By only selling clothes 20 years old or older, she reduces plastic waste because she doesn’t receive packages of individually wrapped items.

“Recycling is not magic. It takes a lot of recourses,” Gibbs said. “It’s reduce, reuse, recycle. Reduce is first. Reuse is second. Recycle is plan C, not plan A.”

The same concept goes for clothing, not just plastic, she explained. Many clothes that are not sold in the United States are “balled up and shipped to third-world countries,” who then get “stuck” with the waste.

“People think that if they buy something new from Target and then sell it to a secondhand store a year later, that’s enough,” Gibbs said. “But it’s not. Even secondhand stores are overwhelmed with inventory.”

Waste Not, Want Not


Gibbs also serves on the board at Tidal Creek Co-op, a natural foods cooperative grocery store that offers bulk buying options, from dried beans to maple syrup to shampoo and conditioner. She works with co-general managers Krista Jorgensen and Anthony Garguilo to encourage customers to bring their own jars or containers when they shop.

They recently added a “free jar” section. Customers are donating jars or containers, bringing them to Tidal Creek, which sanitizes them and then puts them out for free use.

The co-op also offers biodegradable containers for buying bulk, but they prefer – both financially and environmentally – that customers bring their own packaging. Costs of bulk containers are down 40 percent, annualized to about $3,000.

“The number of folks and the seriousness of shoppers interested in zero waste has grown exponentially in the past two to three years,” Garguilo said.

But this isn’t a new concept. Tidal Creek was born out of a community buyers group more than 30 years ago. Kimberly West, a Wilmington native, was shopping at Tidal Creek before it was incorporated.

“It started in the ’70s when environmentalist efforts really began,” West said. “But really it was a way to save all of us money. We’d get together, put our money in a pot and buy in bulk.”

The Tidal Creek staff often learn more about the benefits of zero-waste efforts from their members.

“It’s a multifaceted thing,” Jorgensen said. “We’re learning more and more about what’s in plastic because it’s been around for decades now.”

Tidal Creek has also improved its composting initiatives, keeping almost 3,000 pounds out of their dumpsters monthly.

“Hauling trash is expensive,” Garguilo said. “Doing the right thing is, at worst, a break-even proposition for us. As folks continue to use more and more reusables, we expect our packaging costs to continue to decrease.”

Correction: This story has been changed for the original version to correct the spelling of Darwin General Store owner Kristen Crawford's name.