Local Banks Cash In On Growth 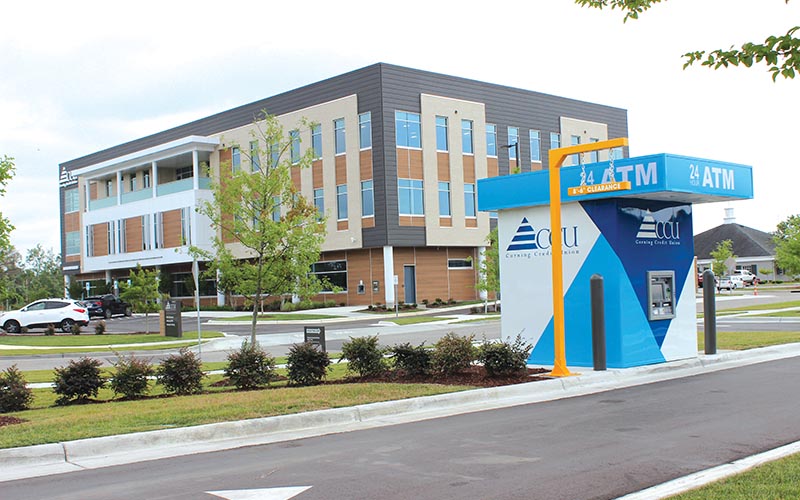 Corning Credit Union last year opened its new, more than 43,000-square-foot regional headquarters on 17th Street in Wilmington.
The Wilmington market continued to show steady growth throughout 2019, both in terms of deposits and local banking presence.

Banks in all three of the market’s counties added deposits between fiscal years ending June 30, 2018, and June 30, 2019, according to the FDIC. The 2019 report showed Brunswick County banks’ deposits totaling about $2.3 billion, up from $2.1 billion the previous fiscal year. New Hanover County deposits totaled $8.7 billion, an increase of $1 billion from the previous year. And Pender County’s bank deposits grew to $365 million from $314 million.

A new bank, Southern Bank and Trust, entered the market at the tail-end of calendar 2018, when it received FDIC approval to open a full-service branch here. Roughly seven months later, the Mount Olive- based bank debuted in the June 30, 2019 FDIC market deposits listing as No. 16 (out of 21 banks), with deposits of nearly $19 million.

In August, Southern Bank purchased its space at The Offices at Mayfaire III, as well as the remainder of the building’s first floor, for $3.3 million.

Another industry development was the transformation of Sound Bank to Dogwood State Bank. The Morehead City-based Sound Bank, with one Wilmington location, was divested by parent West Town Bank last May. That move left Sound Bank free to become Dogwood, a new community bank now headquartered in Raleigh. The reconfigured, renamed bank launched in October.

nCino, reflecting sales of its Bank Operating System to a growing roster of international customers, opened two foreign offices in 2019. In July, the banking software company announced that it had opened an office in Toronto.

Then in October, the banking software company stated it had formed a partnership with Tokyo-based Japan Cloud, a firm that helps software-asa- service businesses succeed in the Japanese market.

With the partnership, nCino has created a new subsidiary, nCino K.K., which will “meet the growing demands of financial institutions in Japan looking to digitally transform their operations and improve efficiency,” nCino’s release stated. The company plans to acquire office space and hire staff in Tokyo.

First Carolina Bank, which launched a loan production office in September 2017, has received FDIC approval to open a full-service branch in Wilmington. The branch will be part of the Bradley Creek Station mixed-use complex, which is taking shape on Oleander Drive. The bank is hiring staff and expects to open its branch this coming summer.

The number of a bank’s branches in any given market is no longer necessarily an indicator of its growth and viability. With the rise of online and mobile banking, financial institutions are re-evaluating their branch networks, closing some locations that lag in traffic. This month will witness the closure of Bank of America’s downtown Wilmington financial services center at 319 N. Third St.