Learning To Fly: Indoor Skydiving Could Land On Eastwood Road 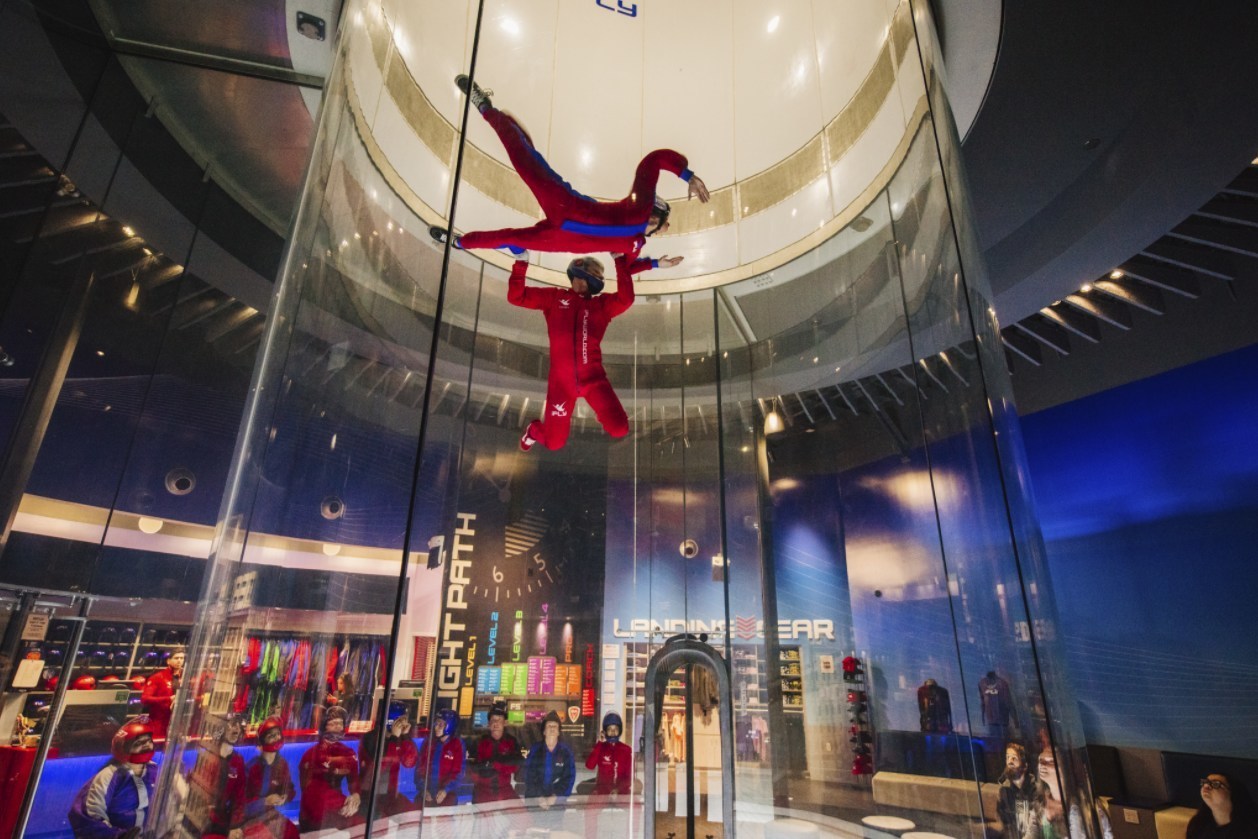 Participants take to the air at an iFly facility in Colorado Springs. (Photo courtesy of iFly)
None of Willy Wonka’s fizzy lifting drinks will be required at iFly Wilmington.

But the indoor skydiving facility, proposed on nearly 2 acres at 1445 Eastwood Road, will need high-powered fans and a glass wind tunnel capable of recirculating 120-mph winds.

A group of partners who have U.S. military ties is seeking a rezoning from the city of Wilmington to bring the iFly franchise, a nationally and internationally known brand, to the undevloped land next to the Mayfaire entrance on Eastwood Road.

The zoning change, tentatively scheduled to be considered by the Wilmington Planning Commission on May 4, would allow for the 5,500-square-foot, 65-foot-tall iFly structure to be built on property currently owned by Jason Swain of Wilmington-based real estate development firm Swain & Associates.

The group has the Swain property under contract. Fly Wilmington LLC is working to cement financing for the project, which is expected to include a loan from non-bank SBA lender Newtek.

Fly Wilmington LLC also started a crowdfunding effort through Folla Capital with a target offering of $1 million and a total offering of $5 million. The minimum investment is $2,000, according to the offering summary, and the deadline to reach the target offering is Dec. 31.

Patrick Maguire, co-owner of iFly franchisee Fly Wilmington LLC and a major in the U.S. Marine Corps, got the idea to establish indoor skydiving in the Wilmington area from his own training experiences. Maguire is a special operations officer, Marine Special Operations Command (MARSOC), and a military free-fall parachutist with 11 overseas deployments on his resume.

“I was always a guy who was very scared of heights, or at least the concept of heights …. But as soon as I did it, I fell in love with it,” Maguire said of skydiving. “Part of the training to do that, before they ever allow you to jump out of an airplane by yourself, is to use indoor wind tunnels.”

As he practiced in wind tunnel facilities in other states, he could see their popularity and potential.

“I just had noticed there were a lot of people in the tunnels and civilian traffic everywhere” from toddlers to the elderly, Maguire said. “Bottom line, everybody's having a great time and smiles on their faces.”

He brought the idea to his father-in-law, George “Jamie” Jamison, who is now co-owner of Fly Wilmington LLC. Jamison, a management and executive search consultant, said he felt Maguire had a solid business plan, with the ability to tap multiple revenue sources, including area residents, tourists and military personnel. Typical iFly sessions cost about $69.95, Maguire said, much cheaper than the hundreds of dollars it could take a beginner skydiver to jump from a plane.

Maguire and his partners said the sessions are safe, with training and safety gear for participants and an instructor who is part of the entire process.

After opening its first wind tunnel in Orlando in 1998, iFly has more than 80 locations worldwide including in the United States, Canada, Brazil, France, New Zealand, Australia, Great Britain, China and Singapore, according to the company's website. Its only other North Carolina location is in Concord near Charlotte.

Having a prominent location for iFly Wilmington was important to the team, Jamison said.

“There are other places in Wilmington we could put it but Eastwood Road has high visibility to tourism, it’s close to Mayfaire, it's close to where CenterPoint [a pending major mixed-use project] is going to be …  it's right up the street from Autumn Hall. So there's going to be a lot of destination traffic coming to that area.”

David Soler, a captain in the U.S. Marine Corps Reserves who is also a son-in-law of Jamison's, joined the group to run the business from the Port City as chief operating officer of Fly Wilmington LLC. Its lead project manager is Bill Adams, former owner of iFly Seattle and iFly El Paso. Adams has been involved in building 17 iFly locations, was formerly an iFly corporate vice president and is an expert skydiver and military freefall parachutist.

If the Eastwood Road site rezoning is approved by the Wilmington City Council in June, Maguire said he and the other partners hope to break ground on iFly Wilmington in the fall and open the facility in the spring of 2023.