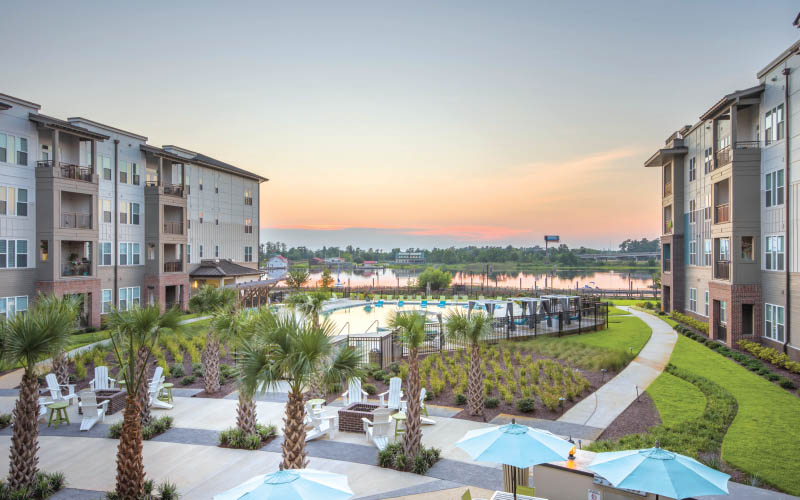 Sawmill Point, an apartment development in northern downtown Wilmington, sold for more than $65 million, marking the highest priced sale of 2019 as of Dec. 19 in New Hanover County. (Photo c/o Sawmill Point)
The real estate industry in the Wilmington area last year produced some high-dollar sales, mainly of apartments, office buildings and storage units. These are the top 5 highest-selling properties of 2019 in New Hanover County.

In Wilmington, CCC also owns Mayfaire Flats on Sir Tyler Drive and is a partner in the development of upcoming downtown apartment community The Flats on Front, on land in front of Sawmill Point. CCC’s website also lists the Headwaters at Autumn Hall apartment complex off Eastwood Road as one of its assets.

Built in 2017, Sawmill Point at 15 Cowan St. includes marina access, one- and two-bedroom units on 3 acres of green space fronting 815 feet along the Cape Fear River and direct gated access to the 1.8-mile Riverwalk, according to a news release.

The seller was The Davis Companies of Boston, an owner and developer of residential units across the eastern United States and a joint venture with Gemini Partners LLC, an entity consisting of Capital Properties, The Wills Companies, Fideli Investments and Symphony Properties LLC.

Cary-based Symphony Properties represented the venture as the developer in the transaction with CCC, according to the release.

“The Symphony team developed a remarkable asset with amenity offerings and interior finishes unrivaled in the Wilmington market,” Okulski stated in the release. “They truly set the bar for future downtown development.”

Hanover Center, one of the oldest suburban shopping centers in Wilmington, changed hands Dec. 19 in a more than $51 million deal.

Preferred Apartment Communities Inc. (NYSE: APTS) made an approximate 92.5% equity investment in a joint venture with Harbour Retail Partners to acquire the center, according to a news release.

Anchored by a Harris Teeter grocery store, the midtown Wilmington landmark at 3501 Oleander Drive measures more than 300,000-squarefeet and has been owned for more than 60 years by the MacRae family, developed by Hugh MacRae II and opened in 1956.

As a result of the new ownership, changes are in store at the center.

Randy Kelley, principal of Harbour Retail Partners who is based in Wilmington, said Dec. 19, “We are working on site plan approval” to add apartments to 7 acres behind the center.

The new owners are also looking at parking lot improvements and remodeling the facade, he said.

“Hanover Center will always be one of the best centers in Wilmington with a strong tenant mix, loyal customer base and wonderful history,” Kelley said in the release.

Preferred Apartment Communities, based in Atlanta, made the investment in Hanover Center through its wholly-owned indirect subsidiary New Market Properties LLC, a news release stated.

Michael Aide, senior vice president and director of investments of New Market, said the investment in the center marks the firm’s continued expansion in North Carolina and its fourth asset in the state.

The joint venture financed the acquisition of the center using a first mortgage loan from First Citizens Bank & Trust Company.

Vitus, a national developer and owner of affordable housing, announced in November that it was welcoming residents back into the newly restored Market North Apartments. Residents were forced to vacate the property after the apartments were severely damaged by Hurricane Florence in September 2018.

To keep Market North Apartments affordable – and allow residents to move back into their previous homes – Vitus partnered with the Wilmington Housing Authority, the U.S. Department of Housing and Urban Development (HUD) and the Affordable Housing Institute, the news release stated. “Through these partnerships, Vitus was able to get the property covered by a section 8 Project Based Rent Assistance contract that ensures its residents will pay a maximum of 30% of their adjusted income on rent.”

Vitus’ $23.6 million investment in Market North Apartments covers numerous exterior and interior reconstruction and improvements, according to the release, such as new roofs, siding, and windows, removal and repair of damaged sidewalks, new accessible routes with dedicated ADA parking, new energy-efficient HVAC systems in all units, updated cabinets and countertops in all kitchens and bathrooms, updated energy- efficient plumbing throughout, and Energy Star-certified appliances.

An investment firm in New York has acquired local self-storage properties in a multi-million dollar deal that closed in June.

The largest one sold for nearly $21 million.

Prime Group Holdings bought several Monkey Junction Self Storage Inc. facilities, including on Carolina Beach Road in Wilmington and one in Leland, according to deeds.

Seller Archie McGirt of Wilmington said in July that he started building his first self-storage facility on Carolina Beach Road around 2001 before the company expanded to multiple properties.

“We grew it quite rapidly,” he said. “We’d finish one and build another.”

Monkey Junction Self Storage Inc. kept a few facilities, including one under construction near Carolina Beach Road and Independence Boulevard in Wilmington, along with a site for one near Sloop Point Road.

“It was a good time to sell so we decided to go ahead and let some of them go,” McGirt said. According to its website, Prime Group, based in Saratoga Springs, New York, is the largest private owner-operator of self storage facilities in the U.S.

“Focused solely on self storage, Prime Group sources, owns and manages its portfolio of over 15,000,000 rentable square feet located in 24 states throughout the U.S.,” the website states.

Monty Spencer Jr., president and CEO of The Storage Acquisition Group, oversaw the sale of four of the facilities in the Monkey Junction Self Storage portfolio that offered a combined 2,832 units and 458 boat and RV spaces for a total of 568,139 net rentable square feet, according to an announcement.

Spencer said the self-storage industry can be variable.

“The market changes so much day to day because the majority of the storage properties are owned by individuals and families, not large corporations,” Spencer said. “With storage, a family could have a different need today than they had yesterday.”

“The national portfolio includes hotels located in North Carolina, Virginia, Florida, Texas, Tennessee, and Georgia, and the assets are affiliated with brands in the Hilton, IHG, and Choice systems,” the release stated. “The hotels are all well positioned in their respective markets and are proximate to dense retail corridors, office parks, hospitals, airports, residential communities, and major highway systems.”

Correction: This version has been changed to reflect that the No. 4 top sale was the largest of several storage facilities purchased.