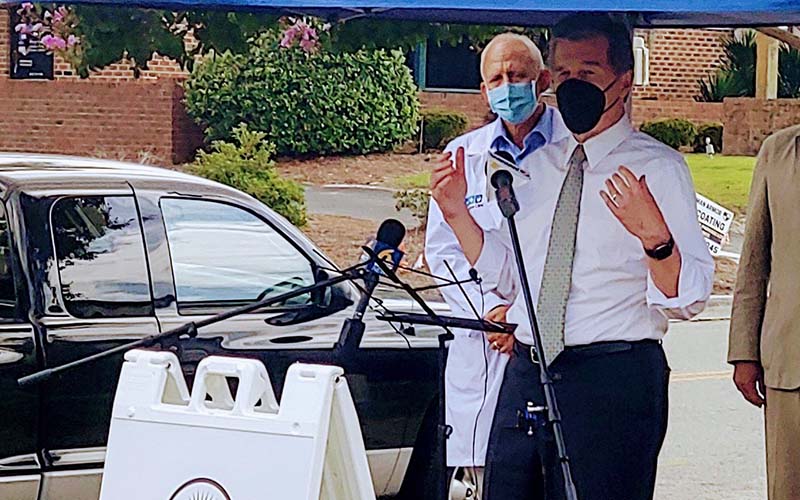 Confronted with a surge in COVID cases, an increasing number of health care providers have embraced monoclonal antibody treatments in an effort to minimize the effects of COVID on individuals 65 years or older or those who are immunocompromised due to obesity, diabetes, cardiovascular disease or other significant factors.

Monoclonal antibodies are proteins made in a laboratory to fight infections, including the virus that causes COVID-19, and they are administered with an IV infusion or shots. Clinical trials indicate the treatment can lessen the amount of the viral load in a person’s body, reduce the severity of COVID symptoms and decrease the likelihood of ending up in the hospital.

“This treatment reduces the risk of severe illness or death by 70%,” Clyde Harris, NHRMC’s vice president of clinical excellence, said in a news release.

On Sept. 16, NHRMC, now part of Novant Health, announced that it had secured permission from the N.C. Division of Health Service Regulation to open a dedicated infusion center, replacing a temporary mobile unit that was needed due to increased patient volume at the hospital.

The therapy is also being offered at Novant Health Brunswick Medical Center, and at both locations individuals must have their medical provider sign off on the treatment before they can access it.

“Because the service is by provider referral only, we are not providing an exact location to avoid causing any confusion that it is a walk-up service,” said Julian March, an NHRMC spokesperson.

Novant Health began offering the therapy in December 2020. “Since then, we have administered these drugs to over 3,200 patients in Winston- Salem, Charlotte, Salisbury and our Coastal market,” March said.

At the time, the N.C. Department of Health and Human Services officials said they had seen increased interest in the treatment but there was only “limited capacity” to offer it through primary care providers and others not associated with a health care system.

Shifting from a direct-order distribution system to a state-coordinated one – a change that is now underway – health officials will have “maximum flexibility to get these critical drugs where they are needed most,” according to a statement from the state health director’s office.

By late September, monoclonal therapy treatments were being offered at more than 200 sites, but providers were being urged not to request supplies that they couldn’t exhaust within a week.

In addition to NHRMC and Novant Brunswick, antibody therapy has been available at several other Wilmington area locations including Cape Fear Clinic, which serves low-income and uninsured individuals from Brunswick, Columbus, New Hanover and Pender counties.

John Devaney, the clinic’s CEO, said the facility began administering monoclonal treatments in January and has now converted a former dental unit into a space dedicated to the treatments. While the clinic administered nearly 100 treatments through August, the repurposed space will allow staff to administer about 35 intravenous and 15 subcutaneous treatments weekly, free of charge to eligible patients and other members of the community.

As long as people “continue to get so sick that they’re hospitalized and/ or die, then I don’t think we’re going to see a drop in the number of people seeking the treatment,” he said.

“Get tested right away if you are experiencing symptoms of COVID-19,” urged N.C. DHHS Secretary Mandy Cohen, who toured Cape Fear Clinic with Gov. Cooper on Sept. 15. “Treatment for COVID must be given within 10 days of symptoms starting and before someone becomes sick enough to need the hospital.”

On Sept. 16, New Hanover County reported its highest weekly number of COVID-related deaths – 37 – since the start of the pandemic.