Our regional economy depends on real estate and construction. It’s no secret that the recession, and the housing finance crisis, hit hard here in Southeastern North Carolina. But recent news is looking very encouraging, not just for businesses like ours, but for the entire area. A couple of recent news items reported on some very optimistic trends.

First, after a long spell of tight money, banks are starting to lend more freely for construction and development projects. That’s good news for home builders, who should be able to start catching up on what’s become a serious shortage of new housing.

Second, new home sales showed healthy growth as 2014 began, improving over slower-than-expected numbers at the end of last year. Weather was a factor in a disappointing December, but both sales and housing starts picked up significantly in January, according to the National Association of Home Builders. In spite of some additional slowdowns caused by winter weather since then, the builders’ group forecasts a positive trend for this year.

One interesting measure came from the US Census Bureau. Spending on residential construction in January was higher than in December. That was a healthy 15 percent higher than a year earlier. Those construction spending numbers had risen for three months in a row, by the way.

In its forecast for 2014, the home builders association warned that tight access to credit could be a “headwind” for construction. But in its surveys, the NAHB found that its members were seeing better conditions when it came to borrowing. Government data showed the same trend, but even so, the builders worried that available credit wasn’t keeping up with demand.

That’s why it was so encouraging to see a recent “Wall Street Journal” article that reported construction lending had bottomed out in 2013, and forecast an easing of the tight supply of new homes.

A company like ours, which works hand in glove with homebuilders, obviously finds this to be great news. But it’s also great news for workers in the construction trades, many of whom have been underemployed for years. Other suppliers, everyone from lumber wholesalers to furniture retailers, also stand to benefit from this trend.

This could also be good news for home buyers. They have faced a seller’s market in recent years as demand has outstripped the slow pace of new construction.

To give you an idea of how serious this is: Nationwide, the average home price in 2013 was a whopping 10 percent higher than in 2012. That’s the fastest increase in at least the past 50 years! And while that’s great for anyone selling a house, it’s made it hard for buyers, especially young families trying to become homeowners for the first time.

So more lending implies more building; more building means supply will improve; and of course basic economics tells us better supplies lead to lower prices, or at least slower increases. And lower prices for houses means more demand, as people formerly priced out of the market are once again able to become buyers.

Government statistics show that the total amount of construction and land-acquisition loans outstanding rose for three straight quarters through the end of 2013. We’re hopeful that trend will continue into this year.

Of course, one reason banks are loosening up their lending practices is that rates of return are starting to inch up. We’re optimistic that this moderate growth in the interest rates builders and land developers are paying won’t impact their prices nearly as much as the tight supply-and-demand situation has. We hear from Realtors that rising prices are far more important to buyers—encouraging them to buy sooner rather than waiting—than the fairly small increases they’re seeing in home mortgage rates.

The likelihood that prices will stabilize as supply improves is optimistic news for home buyers. Those homeowners, especially those who buy older homes that may be ripe for improvements, are an important part of our customer base.

On the other hand, we are keeping a close eye on suppliers’ prices. Recent increases in the cost of lumber and other materials may reflect rising demand. These could have an impact on the cost of new construction, but we hope won’t totally offset the improving supply-and-demand effect.

Two other interesting trends are showing up in the home builders’ data.

Housing affordability has remained almost unchanged, with two-thirds of the home sold in the last half of 2013 being affordable to families earning the national median income of $64,400.

On the other hand, the average size of new homes increased in 2013, because of stronger demand from more affluent buyers.

Our other major customers are the builders, who are starting to enjoy better profits and healthier bottom lines after too many lean years.

The home builders association found that its members’ average net profit margins were a healthy 5 percent in 2012, the latest year statistics are available. That was a huge improvement over just two years before, when most builders barely broke even, and 2008, when the average company was working at a loss. Still, it’s not yet back to the level of 2006, just before the market collapsed.

All these trends add up to suggest a happy combination of factors for our local economy: more home building, more jobs for construction workers, better profits for builders, and better prices for buyers. Certainly we’re encouraged about what 2014 has in store.

I’m always happy to answer any questions about what we can do for you, in your home or for your business. Watch for more tips about how to enhance your home’s value and convenience!

Cee Edwards is President and General Manager of Markraft Cabinets. He joined the company in 1995. Since 1985, Markraft has specialized in cabinet and countertop design and installation in residential and commercial construction and custom remodeling. To learn more about Markraft, go to www.markraft.com. Contact Cee at 910-762-1986. Like Markraft on Facebook at www.facebook.com/markraftcabinets or follow Cee on Twitter at twitter.com/CeeEdwards

Other Posts from Cee Edwards

Picking The Right Vendors Is Essential To Serving Customers

Good Customer Service Is An Investment In Future Business

A ‘Win-Win’ In Business: Helping Yourself While Helping Others

Entering A New Market has Challenges and Opportunities

Being A 'Constant Student' Is Key To Training Successful Employees

Salesmanship Skills: What I Look For In An Account Representative

Customer Service Is A Core Value For Markraft Cabinets Employees

Why Markraft Cabinets Is Expanding

Investments That Pay Off 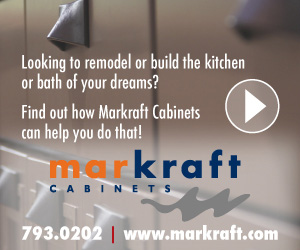