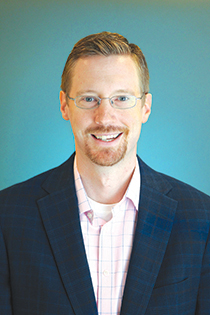 “Pleasure reading mostly centers around cycling as I read Cyclist Magazine from the U.K., Gran Fondo online magazine, and get daily news from cyclingtips.com. I also enjoy the regular posts from the City of Wilmington on Facebook – great way to see pieces of our community.”

One of his favorite TV shows is HGTV’s Fixer Upper, which he watches with his wife to get away from the drama and politics of everyday life. “I find myself watching more ESPN than ever before to avoid the partisanship on news programs.”

Some of his go-to apps include the Weather Channel, Evernote and “Shazam, so I can remember the name of a song on the radio later. I know, I actually still listen to the radio instead of stream.”

Any digital device recommendations: “I love my iPad Pro. I can use it for some light work and taking notes, but it’s great for consuming media and it just works.”

Jones prefers using social media to observe rather than to post. “I’m slowly unfollowing all my friends and relatives on social media as my streams turn into a news stream. I’ve really enjoyed seeing VOX vs. the WSJ vs. The Economist vs. Bloomberg in my feeds and their different perspectives on economic issues and politics.”