In Pender County, More Than 1,000 Acres Sold To Homebuilder, Partners 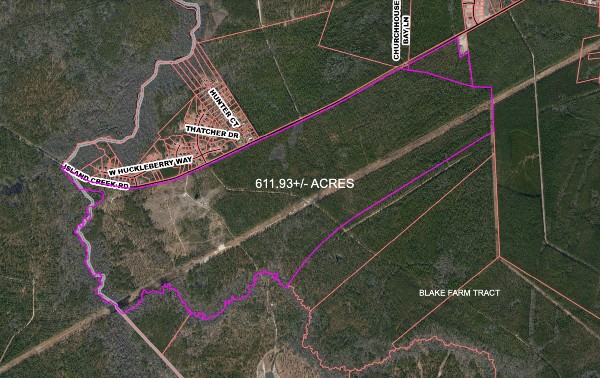 Wilmington-based McAdams Homes and partners bought 612 acres on Island Creek Road for $5.8 million and 411 acres on Sidbury Road in Scotts Hill for $6 million.

The sellers were entities controlled by Jim Teachey.

McAdams Homes also bought 130 acres in the same area in December last year and 30 acres off Country Club Road in Hampstead in early May.

“The last thing you want to do is just dump a bunch of lots all at one time and have it be all the same,” Sosne said. “Our investments were geared toward, on those two tracks specifically, more of a longer-term approach.

“We want to see how things progress, where the needs are, and obviously market conditions and what the market dictates. And then we'll put our plan together from there.”

Sosne has said he envisions his company building up to 5,000 homes in southern Pender County over the next decade.

The plan for the latest purchases could include a large master-planned development like neighboring Blake Farm, a 1,300-acre, mixed-use project planned by a separate developer.

For the McAdams Homes land, the future could also include a school.

“We have spoken to Pender County about potentially helping them with their future needs, whether or not that’s a school or school sites,” Sosne said.

But for now, for McAdams Homes’ holdings in Scotts Hill, the firm is focusing on Silo Ridge, a 75-acre community with 315 lots for homes and townhomes. Silo Ridge is about a quarter mile from U.S. 17 on Sidbury Road, also next to the Blake Farm site.

Sosne said he expects to break ground on Silo Ridge in the fourth quarter of this year and start building homes in the first quarter of next year.

For the 612- and 411-acre sales, brokers Glenn Imboden and Allan Fox of Wilmington-based Coldwell Banker Commercial Sun Coast Partners represented the seller. They represented McAdams Homes in the company's Hampstead purchase in May.

More than 900 apartments in the works in Leland