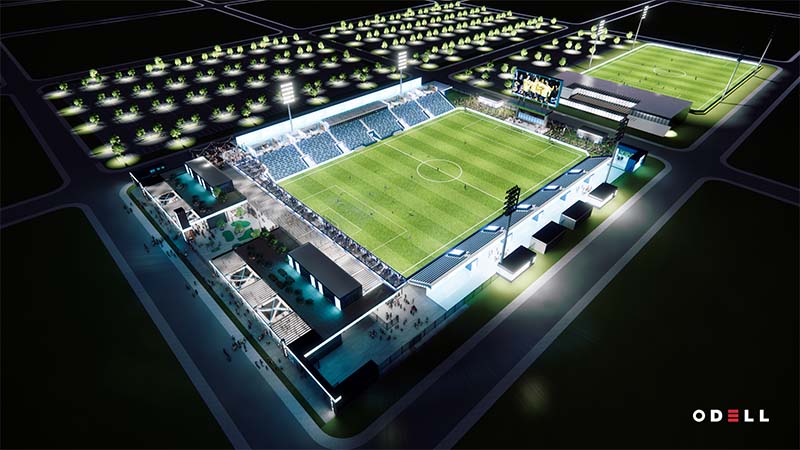 A new group has signed an expansion agreement with the United Soccer League to bring a professional soccer team back to Wilmington. (Courtesy of USL/Odell)

A professional men’s soccer team is poised to return to Wilmington by 2024, if recently announced plans come to fruition.

Will it be a resurrection of the Hammerheads? Maybe so, officials say.

League One is the third-tier professional level of soccer in the U.S., behind USL Championship and Major League Soccer (MLS), the most competitive division.

Though plans are still nascent, the group behind the push is planning a new 4,500-seat stadium in the area, nestled among a mixed-use campus that would include high-density housing, retail, a food hall, beer garden and more. “The plan is to build a community where people are outdoors and enjoying life,” said Dewan Bader, one of the group’s founders. “Wilmington was a market that we identified very early, in large part because of the history there and the support they had,” Bader said.

Bader, a staff coach at North Carolina FC Academy who played for the Hammerheads during the team’s opening season in 1996, formed the new group alongside UNC-Chapel Hill professor Chris Mumford, who teaches entrepreneurship and related courses at the UNC Kenan-Flagler Business School. Their sons played soccer together, Bader said, and after realizing similar goals, they identified Wilmington as a positive market for professional soccer. In their quest to actualize the plan, the two met Scott Sullivan, a co-founder of Cameron Management, who is helping the team fulfill its real estate needs and is personally investing in the endeavor.

“We kept on saying, we’re just going to keep on opening doors until doors shut on us,’” Bader said. “And for the most part, the doors just kept opening.”

The existence of the already well-attended Wilmington Hammerheads Youth Soccer program, a nonprofit spin-out of the original Hammerheads team presence, and the college programs at the Univesity of North Carolina at Wilmington helped cement the decision, Bader said. “You want that stability, you want that foundation there,” he said. “The bonds are very strong in Wilmington. It was just a very supportive vibe.”

Including an 18-month post-recession hiatus, the Hammerheads enjoyed a lengthy stay as Wilmington’s only professional sports team until its last local game in 2016. The team enjoyed an average attendance of nearly 3,000 at the 6,000-seat Legion Stadium, a city-owned property first developed in the 1930s. “For a small community, that’s a lot of support,” Bader said.

Carson Porter, executive director of the Wilmington Hammerheads Youth Soccer program, said he’s also participated in talks to bring the professional program back to town. “Our youth club will have a strong connection to the pro team,” Porter said.

A youth-to-pro pipeline will be established as part of the efforts, officials said. Separately, the nCino Sports Complex, a major city-funded project to enhance the youth program's existing complex off U.S. 421, is underway with a tentative opening date of 2023, officials said earlier this year.

Formal organization of the new group is still underway. A national marketing agency will help the group determine whether to carry on the tradition of the Hammerheads name or if a new brand would be better suited, Bader said. The already inked expansion agreement with USL means the group has the exclusive rights to bring a team to Wilmington, and the next step is getting a franchise agreement signed and paying a franchise fee, he said. A women's team could come next, according to Bader.

Current plans call for the new facility to be developed by 2025, with officials aiming for a location no more than a 10-to-15-minute drive from downtown Wilmington, according to Bader, and early games could be played at Legion Stadium for at least the inaugural 2024 season.

“These are long-term commitments of 20-year agreements,” said Justin Papadakis, chief operating and real estate officer at USL. “So they’re making a major commitment to Wilmington.”

League One currently has 11 total teams across the U.S., including two in the state: Charlotte Independence and North Carolina FC, located in Cary. The state’s first MLS team, Charlotte FC, held its inaugural match at Bank of America Stadium in February. There are no Championship (second-tier) teams in North Carolina to date, but the nearest team, the Charleston Battery, could play Wilmington’s new team in the preseason or specialty cup matches, according to Papadakis.

The league is in expansionary mode, Papadakis said. “We have billions of dollars right now of stadium-anchored development happening. And that doesn't even capture all of the economic impact that we have in our communities,” he said.

USL allows local teams to retain 100% of revenue generated from ticket sales, merchandising and sponsorships, he said. “All the money spent in Wilmington stays in Wilmington,” he said. The independence doesn’t mean the league will be hands-off: “We have a team of some of the best, we think, sports executives in the country… that are there to support the team in every aspect of their business,” he said. “So that's a perfect marriage of keeping the money local by having that very, very strong, league support to help our teams optimize their business on and off the field.”

The league’s goal is to create a “community living room” with its stadiums, he said: “Clubs are community assets.”

With the support of the nationally recognized Wilmington Hammerheads Youth Soccer program, this year’s World Cup in Qatar, and the U.S.-hosted World Cup in 2026, Papadakis said local players could have the chance to play on soccer’s biggest stage. “If we can do this right, all those players in Wilmington, they'll be able to say, ‘If I work really hard, I can play under the lights on ESPN in Wilmington and have a real good chance to maybe represent their country in a World Cup,’” he said.