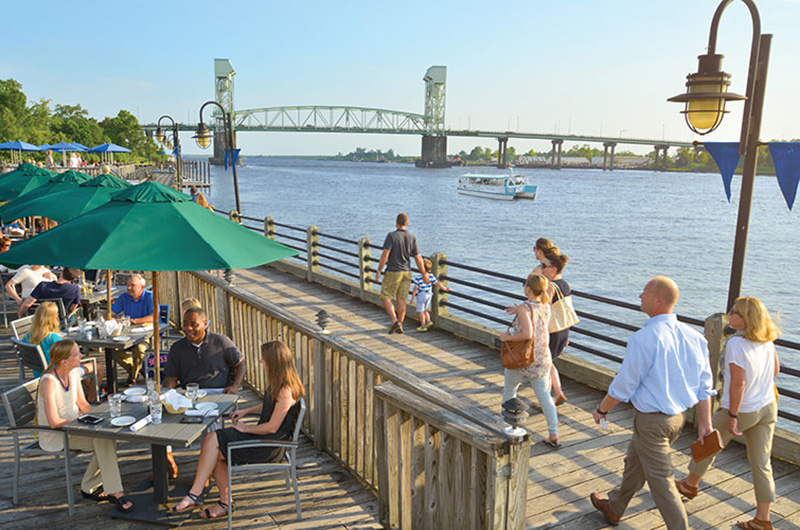 Voting is underway in USA Today’s 10Best Readers’ Choice Awards for Best Riverwalk. Last year, Wilmington’s Riverwalk placed at No. 3. (Photo courtesy of Wilmington and Beaches CVB)
Wilmington is once again in the running to be named the nation’s top riverwalk.

Best Riverwalk is one of the contests currently underway in USA Today’s 10Best Readers’ Choice Awards, which highlight top attractions based on votes from readers. The Riverwalk snagged first place in 2014, but in 2021 and 2022 it landed in second and third places respectively.

A popular destination for locals and visitors, the 1.75-mile-long Riverwalk hugs the Cape Fear River’s path through downtown Wilmington. In addition to scenic views of the river, walkers can visit more than 200 restaurants, shops and other attractions located along the way.

Constructed in the early 1980s, the Riverwalk has expanded northward in recent years as development in the area, including Live Oak Bank Pavilion and Riverfront Park, creates new downtown attractions. The city is currently investigating the feasibility of extending the Riverwalk’s northern terminus beyond the Isabel Holmes Bridge. A feasibility study on the extension is due to be completed in April.

To date, the city has invested roughly $40 million in the construction and maintenance of the Riverwalk, a city spokesperson confirmed via email in December.

Wilmington’s Riverwalk is one of 20 nominated for the contest by a panel of experts. After four weeks of voting, a winner will be announced on Feb. 17. Readers may vote once per day until the contest closes at noon on Feb. 6.

As of Monday afternoon, the leaderboard shows Wilmington in the No. 8 slot.