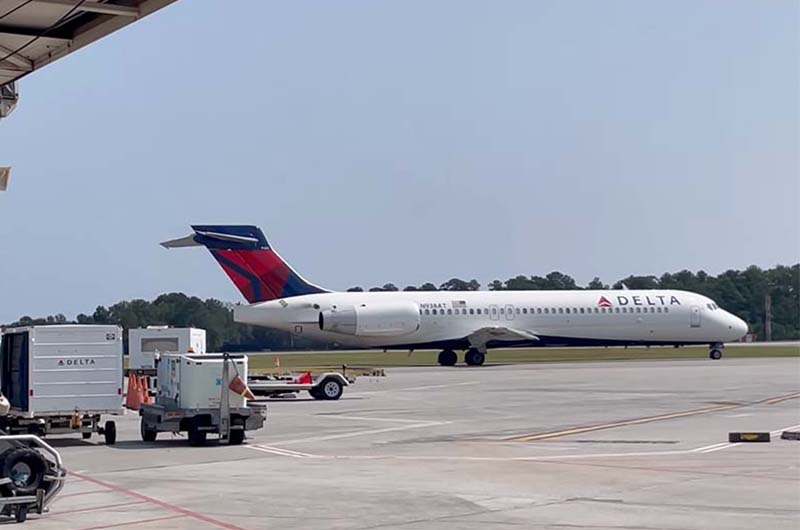 Nonstop seasonal service to Boston, which will begin in May, marks the third nonstop route offered by Delta Air Lines at Wilmington International Airport. (Photo courtesy of ILM)
Wilmington International Airport added another nonstop route to its lineup for 2023 with a seasonal service to Boston, one of 14 nonstop destinations in the airport’s tally.

Delta Air Lines is now selling tickets for seasonal nonstop service from Wilmington to Boston Logan International Airport, which will run on weekends from May to September. It is the second announcement from the carrier of expanded service at ILM in recent months. In November, Delta extended its seasonal route to LaGuardia Airport to a year-round nonstop.

Carriers like Delta weigh a variety of factors when determining which routes to service to ensure they make a sound business decision, and according to an ILM spokesperson, the airport likely saw favorable conditions to increase air service from Wilmington.

“For Delta to extend this service, we believe Delta saw a business case to make the route year-round,” the spokesperson said. “We appreciate Delta providing year-round service to Atlanta and LaGuardia and summer seasonal service to Boston.”

Coupled with legacy carriers like Delta and American Airlines utilizing larger aircraft for routes out of Wilmington, these additions put the airport on track to exceed its banner year of performance in 2019, when the airport hit 1 million total passengers for the first time, airport officials have said.

Final numbers for 2022 travel at ILM were not yet available as of Wednesday, but through November 2022, the airport saw more than 988,000 passengers, a figure higher than passenger totals at the same point in 2019.

Delta’s nonstop service to Boston is scheduled to run May 27 through Sept. 3. The flights will operate on weekends, departing Wilmington at 12:50 p.m. on Saturday and Sunday and departing Boston at 10 a.m. on Saturday and Sunday. An ILM spokesperson confirmed the airline is currently slated to use an Embraer ERJ-175, a narrow-body aircraft with 70 seats, for the flight.

A quick check of ticket prices on Wednesday showed round-trip tickets from ILM to Boston starting at $432 for the inaugural weekend in May.