Visitor Spending Way Up In 2021 In Cape Fear Region 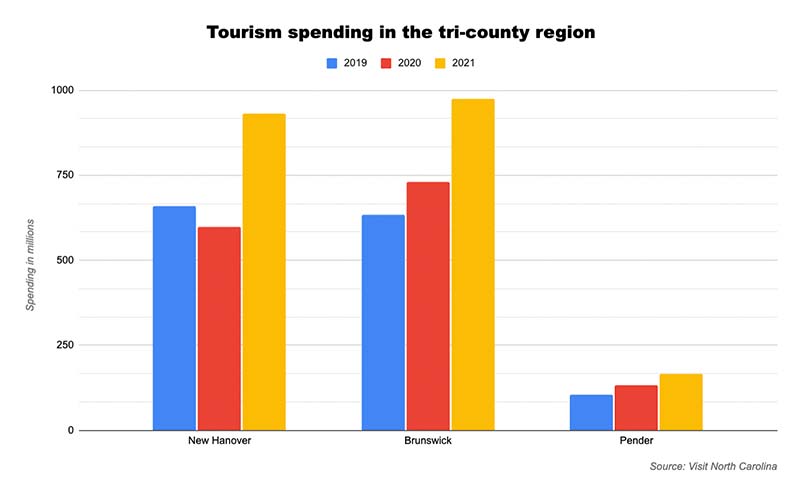 Tourist spending in the tri-county region jumped a dramatic 41% between 2020 and 2021, slightly behind the state average of nearly 45%.

Statewide, visitor activity has nearly completely rebounded from the major hit imposed by the pandemic: Tourism spending in North Carolina is just 1% shy of 2019 totals. In the Cape Fear region, visitor spending has far surpassed pre-pandemic totals, from $1.39 billion in 2019 to $2.07 billion last year.

Within the region, growth was most dramatic in New Hanover County, with spending up nearly 56% and visitors spending $930 million. The county ranks seventh among the state’s 100 counties, according to a release from the Wilmington and Beaches Convention and Visitors Bureau.

“While we expected an increase over 2020 pandemic-driven decreases, we did not anticipate that spending in 2021 would so greatly exceed our pre-pandemic record of $658.78 million in 2019, representing a 41.23 percent increase,” Kim Hufham, president and CEO of the New Hanover County Tourism Development Authority, stated in the release.

Brunswick County Tourism Development Authority director Mitzi York said her team wasn't surprised the study reported a significant year-over-year increase for the county. "We continue to feel fortunate that tourism in Brunswick County has fared well during the pandemic," she wrote in an email Wednesday.

Pender County tourism spending grew 25% to $165 million. Tourism generated about $8.9 million in local taxes in Pender County, amounting to a savings of about $243 per resident, according to county tourism director Tammy Proctor.

Combined, the tri-county region's share of visitor spending was 7.2% of the state's total last year, according to data shared in the report.